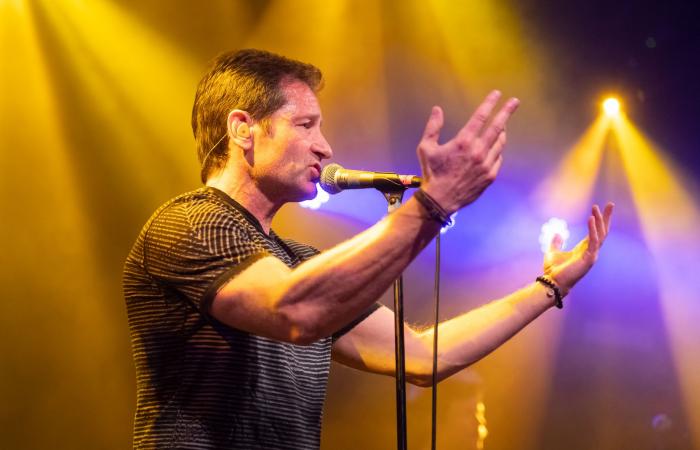 Last January, a lifetime ago, David Duchovny was housed in a recording studio in Catskills, New York, working on his third album. Gestureland, the follow-up to 2018 Every third thought. When Rolling Stone When he came to see him, he recorded the anti-Trump song “Layin ‘on the Tracks,” which deplored the fate of America through a “stupid orange man in a cheap red hat.” This track officially drops on Tuesday – – and it’s even more current now.

Earlier in the year, the actor, musician, and writer enjoyed a few days in the backcountry working on his new music at the Outlier Inn, a 12-acre estate with an alpaca farm, glamping facilities, and a slowly decaying deer carcass that the studio dog Buella ate between takes. She gallantly gave her bed to Duchovny’s puppy Brick (a fluffy mix of German Shepherd and Corgi with more than 15,000 Instagram followers). Both dogs snuggled behind the soundboard when Duchovny tried out the lyrics to “Layin ‘on the Tracks” in the cabin: “This civil war we fought in / Since before the flood / Yes, there is a part of us that always was / at home in the blood. ”

Nine months later, when Duchovny is quarantined in his New York apartment, he regrets how prescient the song is now. “I probably helped write the song [bandmate] Colin [Lee] a year ago, ”he says. “Unfortunately it’s a little prophetic at this point – I’m not happy about that. [The song wasn’t] stop certain activities; It was not a direct comment on any particular action. For me it was just a snapshot of my state of mind and then what I saw as the state of mind of the country. My approach to lyrics is vague this way, as much as I love it [Neil Young’s] ‚Ohio.’“

Duchovny says he decided to purposely release the song before the election. “I think I just wanted to record,” he says. “I mean, not that it’s an act of bravery at this point. … I can’t change anyone’s mind. I understand people who are voting for Trump. I understand people who are voting for Biden. I really don’t get it [the undecided voters]. I don’t know how to speak to someone who hasn’t made up their mind at this point. I mean, for me, that’s a fascinating state of mind. Like, ‘Wow, really?’ ”

In the winter the song was relevant, but far less bad. This was before the Covid-19 pandemic, before the aftermath of civil unrest, even before Joe Biden was selected as the Democratic candidate. Duchovny was sitting in the studio – Brick stretched like a carpet over his feet – and seemed to be comfortable. For an actor with decades of experience (and epic novels in his brain), Duchovny seems content to see music for what it is on its purest level: fun.

“I started playing the guitar 10 years ago,” Duchovny told me that winter when sunlight fell through the massive windows of the studio. A group of photographers had broken up and their cameras were full of images of the actor perched on a stool over a sea of ​​pedals. “Finally we’re alone,” he breathed, and then continued with his original story. “I should be a much better player than me. It’s like a language; If you don’t learn it young, you are at the great disadvantage of ever becoming really fluent. I focus more on singing and using it as an instrument, so my guitar playing has probably deteriorated over the past four years. It’s good enough to throw chords together. I’ll never be a great player, but I wanted to be good enough to have access to a range of chords and play them so that I could write songs about them.

“Music is for everyone,” he added. “At this late stage in the game, I’m asked, ‘Why do you think you can do this? ‘It’s music. It belongs to everyone. Anyone can. If people don’t like it, it doesn’t matter. ”

Duchovny started learning guitar to cut the trailer time between takes and was delighted when all of the chords he was practicing gave way to the original songs. His first was the simple rocker “The Things” from 2015 Hell or high water. “I didn’t want to write anything personal because I didn’t want anyone in my business – or someone to ask me what the song was about,” he said. “So I just wrote a song called ‘The Things’ because it couldn’t be more neutral. It’s all about things. ”

It’s not a surprising stance considering that Duchovny had a part of the tabloid over the years. As such, the actor-musician seems almost allergic to personal details when it comes to his music. He’s even an avowed fan of stereotypes and says, “The waiting is the hardest part.”

“You really say that and people say, ‘You idiot. ‘”Duchovny sneered as Brick sniffed off to find Buella. “But you sing it and it takes on a new meaning. That was an interesting magic to try to capture. ”

It follows that his texts are often simple – in contrast to his novels like his upcoming Mormon epic Really like lightningwhich was apparently written by a man with a Masters in English from Yale. (At first he wanted to become a professor of English, but after studying with literary critic Harold Bloom, he decided there was nothing he could add to the profession.)

“I think we’re in a strange place with beef between artists and reading in someone’s separation,” he mused as an assistant spirited water bottles in our hands. “It’s so uninteresting to me. I know that I am in the minority. I don’t want to learn anything about anyone through the song. ”

Sure, Duchovny is private – up to a point. When it comes to love, he’s pretty open about his role as the father of two teenagers. He even admitted to writing a slightly more emotional track for his upcoming album “Call Me When You Land”. Inspired by his favorite love song of all time, the Beatles’ “Hey Jude”, the new song is about the love of a father.

“There are so many different kinds of love,” he said, petting Brick, who reappeared like a fluffy ghost towards the end of the interview and lay down on Duchovny’s boot. “I have a different attitude towards love songs as I got older and became a father. If you had played ‘Cat’s in the Cradle’ for me at the age of 16, I would be like ‘Ugh’. Now I yell every time I hear it. “Then, as if thinking about the evolving meaning of” Layin ‘on the Tracks, “he added,” It’s funny the way songs … they’re patient. They are waiting for you. ”

These were the details of the news David Duchovny on the new anti-Trump song ‘Layin’ on the Tracks’ for this day. We hope that we have succeeded by giving you the full details and information. To follow all our news, you can subscribe to the alerts system or to one of our different systems to provide you with all that is new.