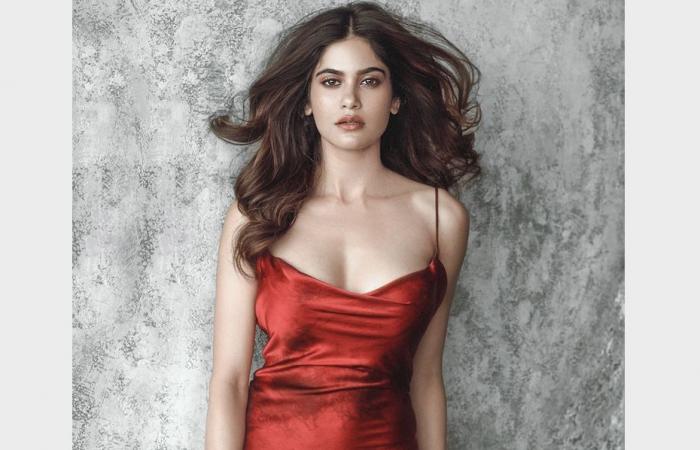 Thank you for reading the news about 'Aashram' actress Aaditi Pohankar on why Covid... and now with the details

Aden - Yasmine El Tohamy - Actress Aaditi Pohankar is someone for whom the coronavirus pandemic has been a blessing in disguise. While there's no doubt that the film and television industries in India were adversely affected by Covid-19, Aaditi was lucky enough to have already completed (pre-lockdown) shooting for two web series (Aashram and She), both of which went on to prove popular with both audiences and critics.

The perky 25-year-old, who has a background in theatre as well as credits in Marathi and Tamil cinema, revealed in a Zoom interview how 2020 is shaping up to be a great year for her.

Aaditi told us how the lockdown in Mumbai had initially put a dampener on the release of the Imtiaz Ali-created series She, where she plays a police constable, Bhumika, who transforms into a honeytrap in order to bust a drug operation.

"There was a pandemic and it was something that we've never seen before - I came in with She on March 20 and and that was the day the lockdown was announced in Mumbai! We had to cut down on our junkets and we had only few interviews that could happen and no hoardings at all because there were only corona-related hoardings everywhere! So I got a little put off by what was happening in the beginning; I had put a lot of effort into this character - because I'm really not this character!"

Imtiaz Ali, she said, initially told her to 'do romcoms' when they first met. "He said the She character was very 'thanda', which basically is what society refers to as a girl who is not glamorous." She revealed how the wait for a call back was 'heart-breaking' because she had always wanted to work with Ali. "I gave the test and I still remember, I got a call from them in a week and I felt they're probably calling me by mistake, because it was impossible, I didn't fit the character so how would I get the role?"

But despite her own doubts (even her family felt she was nothing like the older, married Bhumika), Aaditi managed to get into the skin of the character beautifully. "As we went ahead, the way it shaped up surprised pretty much all of us because I got really absorbed by the character, I was excited to see what happened to it, then the series released on Netflix, this lockdown happened and thankfully She became a success. I started realising the lockdown had worked in my favour. Everybody was watching She!"

By the time She released, Aaditi had also finished shooting for Aashram - the story of a cult that revolves around a duplicitous self-styled spiritual leader (played by Bobby Deol) - and was 'doubly excited' because she knew her second series would be out soon.

"By God's grace it's been a really great 2020 because Aashram became another successful series! I feel so fascinated that as actors we get to do people we've never seen before - my character in Aashram, Pammi, is a very naïve, innocent, small-town girl who believes in her dreams. She's a wrestler, so she's courageous, strong and yet she is innocent."


'I feel for Pammi'
Aaditi said she could relate to the character as she herself had been an athlete who aspired for bigger things. "As I was going through the character I was reminiscing about my running days (she represented Maharashtra in athletics) - I was participating in Nationals and I remember there was a time when we used to wonder, wouldn't it be so awesome if we had an 'India' jacket?"

"So I feel for Pammi quite a bit and when I see (in the second part) the kind of courageous turn that she takes - it's marvellous."

Pammi also struck a chord in her because of her 'innocence and honesty'. "In Aashram, you see how she is completely devoted to this 'baba'. She makes the decision to follow him, then convinces her mother and brother about it. "

To the people who don't see what Pammi and her have in common, she said, "The similarity is between anyone who is aspiring - whether you're an actor or an athlete or something else - we all have this hope, this path that we lay for ourselves to go forward. That is what I think Pammi had and that is what I connect with and since I connect with it, being an actor and a medium, the audience will also connect with it."

'Bobby always broke the ice'
Aaditi was all praise for co-star Bobby Deol, who marks his OTT debut with Aashram. "Bobby was a lot of fun. I call him 'Bobby sir' and he's like, 'don't call me sir, you're making me old'. So I said 'okay' - but it's weird because I have known him for years now (laughs). He has a very innate childlike quality; if at all he wants to say something, he just says it, without thinking twice. I used to be hesitant about what I should or shouldn't say. And he'll be like, 'what do you want to do, do you want to do a rehearsal? Come on, let's do it'. He always broke the ice, never behaved like a senior actor would. My experience of working with him was amazing."

Aashram, emphasised Aaditi, carries a strong message and flags a warning to those in awe of a seemingly superior individual. "A certain sector of society goes ahead blindly following someone thinking 'he's my saviour' and that happened with Pammi also. Filmmaker Prakash Jha is known to put forward bravery - it's like, don't think of yourself as anything less because the minute you think that then someone will act on it and take your power away. It's certainly a very holistic kind of message to a lot of people because now the series has become very popular so imagine the amount of awareness it has created. And now, people will be careful, if they're worshipping somebody, idolising somebody who is probably taking advantage of them."

She expressed her delight at the recognition she is receiving now, thanks to the success of both Aashram and She. "I think I can't ask for more, I'm so happy - suddenly people start noticing you and they are like - 'you, you did THAT!'" The best part of her newfound fame is the fact that people approach her for work now, rather than the other way around. "Now directors call me themselves and they say, should we go ahead with this, let's read the script out and let's meet, the process has become so easy, otherwise, you are so vulnerable (as an actor). I really want to work a lot and I love it when a filmmaker approaches me."

Living in the moment, in Covid times
Aaditi jokes that the biggest life lesson she imbibed from the pandemic was learning to cook. "Jokes apart, I think I really learned to live in the moment," she said, adding, "Because we all were in such a chaotic time, and then everybody was like 'shhhh' - the whole town went quiet. That gave me a lot of time to think about the present, about the time I'm spending with my family. I think that was a real eye opener. Your folks really miss you. That's what I got to know when I stayed home. This is when I really learned to live in the moment and not think about the future. If something is making me happy right now, I will stick with that."

As a part of the film and television industry, did Aaditi have any opinion on the repercussions Sushant Singh Rajput's death was having in Bollywood? She asserted she didn't want to comment on a situation she had less information about. "Honestly I'm not very active on social media for that same reason, because I don't know what the truth would be - only the people who are looking into the matter would know." Drawing on her Aashram experience, she added, "You could become a fake 'godman', where today you say something and just walk off, but look at what those words can do to people! Honestly I won't be able to talk much about it because I have stayed away from it."

On a parting note, we asked Aaditi what can viewers expect from the second part of Aashram. "There's a lot more about what happens to Pammi, it's so beautiful, saddening, and marvellous what happens with her at the end. I think I'm also very excited because I'm just done with the dubbing. You can feel Pammi's pulse. Just watch out for the second part, it's going to be terrific."

These were the details of the news Bollywood News - 'Aashram' actress Aaditi Pohankar on why Covid... for this day. We hope that we have succeeded by giving you the full details and information. To follow all our news, you can subscribe to the alerts system or to one of our different systems to provide you with all that is new.