Bollywood News - Class of '83 Review: Bobby Deol shines in this... 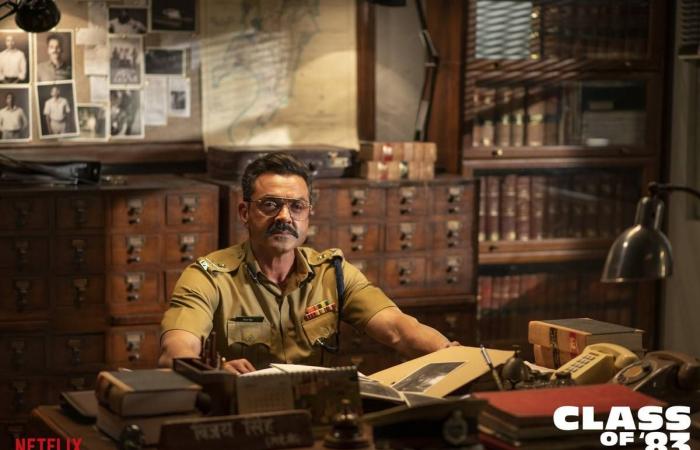 Thank you for reading the news about Class of '83 Review: Bobby Deol shines in this... and now with the details

Aden - Yasmine El Tohamy - If ever there was an institution in dire need of PR to salvage its hard dented reputation right now, its none other than the Mumbai Police. In that regard Netflix's Class of '83 couldn't have been timed better.

Based on journalist S Hussain Zaidi's book The Class of '83: The Punishers of Mumbai Police, the cop thriller is directed by Atul Sabharwal (Aurangzeb) and produced by Shah Rukh Khan's Red Chillies Entertainment.

Just when the intrepid police force of India's entertainment capital, once proudly referred to as the 'Scotland Yard of India' (yes) is taking a rap for the lackadaisical manner in which they have handled the mysterious death of Bollywood actor Sushant Singh Rajput, comes the Bobby Deol starrer that revolves around an elite Mumbai force.

While the tone and pitch of the one and a half hour movie can't be faulted with, the same unfortunately can't be said about the plot. The nexus between cops, criminals and corrupt politicians has been explored endlessly by the Hindi film industry. Class of '83 aims to stand apart from the crowd as it explores the trajectory of five trainee cops from a Police Training Academy and their rise to a covert elite force that specialises in encounter killings.

Cops turning into trigger-happy vigilantes is a theme that has played out relentlessly on the big screen with much greater impact. Class of '83 unfortunately doesn't offer anything new, except for the five newbies who play the  'back-benchers' turned marksmen who go around their business of ridding Mumbai of its dreaded gangsters.

However, the screenplay lags in fleshing them out individually as a result of which they seem pretty inter-changeable. Not much effort has been taken to give them solid backgrounds or an identity that would make them stand out from the each other. Anup Soni plays the corrupt politician with admirable restraint, though again his character could have done with a bit more depth. The lack of a solid female character (but for Singh's departed wife, who makes fleeting appearances through the movie) turns this into a testosterone-infused world.

In contrast the one who towers over and above the rest of the cookie-cutter characters in this sepia-toned period piece is Bollywood's own Bobby Deol. As Dean Vijay Singh he is in top form as the brooding, angst ridden cop battling his own inner demons. With his solid presence he holds the movie together even as his protégées, the five police trainees, run helter-skelter.

The retro effect plays out well though the mainly dark tone of the movie will have you squinting at the screen initially. Why do so many of these movies dropping on the OTT platform face a similar issue, I wonder.

In the end the Class of '83 is most memorable for its lead star, Inspector Vijay Singh, rather than the class itself and that's a shame.

The movie comes a bit too late perhaps to salvage the reputation of Mumbai's police force. After all if an upright, conscientious cop, bent upon bending the rules to maintain the law and order in his beloved city, like Dean Vijay Singh even existed in real then the police force wouldn't be going through what it is experiencing right now, would it? [email protected]

Class of '83 is currently streaming on Netflix

Class of '83 is currently streaming on Netflix

These were the details of the news Bollywood News - Class of '83 Review: Bobby Deol shines in this... for this day. We hope that we have succeeded by giving you the full details and information. To follow all our news, you can subscribe to the alerts system or to one of our different systems to provide you with all that is new.