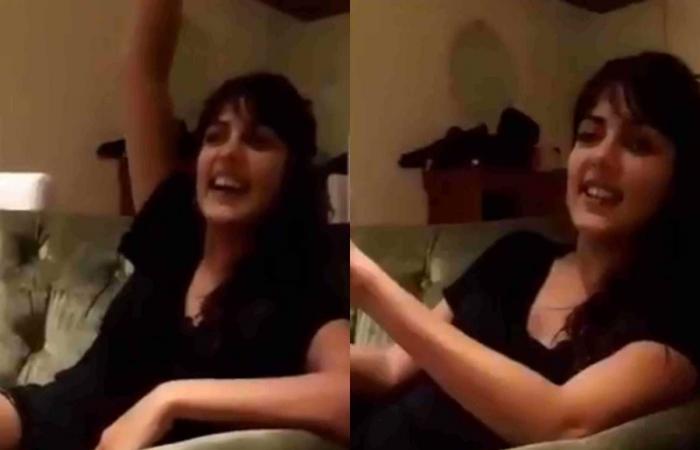 Thank you for reading the news about Rhea Chakraborty explains her viral 'Apun Tai... and now with the details

Aden - Yasmine El Tohamy - Rhea Chakraborty has responded to her black dress video that has gone viral, drawing much flak for the actress all through Friday for her antics in the clip.

In the video, Rhea behaves in a jovial manner - she talks of controlling her boyfriend and manipulating him.

"Apun tai hai (I am the big aunt)", she declares with swagger in the video, adding that she controls the goons, and make them work at her beck and call.

While netizens slammed her saying she was a master manipulator of men after seeing the video, Rhea has now come out to state that she was doing a stand-up comedy act.

"I saw the black dress video. I was doing a stand-up comic act. I like to do stand up comedy sometimes. Tai is one of the characters I play," she clarified, according to a report in reports zoomtventertainment.com.

It is not known when the video was shot, and in what context she was speaking.

However, all through Friday, the video left Sushant fans fuming.

One wrote: "rheachakraborty talking about being 'GUNDI' and some DON. What was her intentions only God knows #RheaChakraborty #SushantDeathMystery #CBICantBeDeniedForSSR."

Another wrote: "The real face of #RheaChakraborty! She is a master manipulator and calls herself a don. She openly admits to manipulating #SushantSinghRajput she just didn't know she was being recorded!"

Sushant and Rhea were in a relationship before the actor's alleged suicide on June 14.

Sushant's father filed an FIR in Patna accusing six people, including Rhea, for abetment to suicide. The charges the late actor's family has levelled against Rhea include taking money from his son and threatening to disclose his medical reports with the media.

Sushant's family has also accused Rhea of keeping him away from his family.

These were the details of the news Bollywood News - Rhea Chakraborty explains her viral 'Apun Tai... for this day. We hope that we have succeeded by giving you the full details and information. To follow all our news, you can subscribe to the alerts system or to one of our different systems to provide you with all that is new.