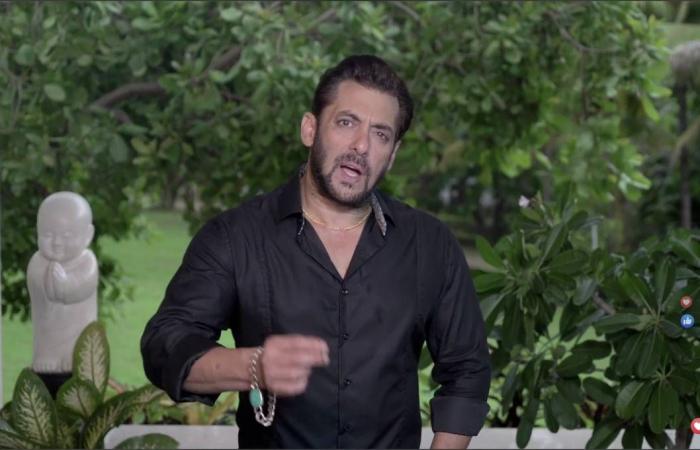 Thank you for reading the news about Salman Khan buries the hatchet with Arijit Singh? and now with the details

Aden - Yasmine El Tohamy - How do you entertain your fans while maintaining the current social distancing norms as well as get them to loosen their purse strings and donate for a worthy cause?

Bollywood superstar Salman Khan did all that and more as he delivered a well executed not to mention slickly produced 'live show' on his Facebook page as part of a fund-raising initiative, Chhoti Si Asha, late this evening.

This was part of the Salman Khan Foundation, Being Human's association with Rotary India, Rotary Club of Bombay and Wizcraft International Entertainment.

The live feed that went on for nearly three hours featured performances from many of his close associates and was interspersed with snippets from the IIFA show in Dubai, including dance numbers by Katrina Kaif, Sonakshi Sinha, Aayush Sharma, Prabhu Deva and Guru Randhawa.

The show which featured Madhuri Dixit's newly released single Candle and even Khan's rendition of Pyaar Karona saw the actor getting emotional while speaking about the close associates he lost to coronavirus, including his nephew, an old classmate as well as singer-composer Wajid.

The live show, a large section of which was hosted by model-actress Waluscha D'Souza, had inputs from many of his industry associates including Katrina Kaif and Vicky Kaushal (did we just imagine it or did the camera linger on the couple a bit more than necessary as they were filmed at an award function?).

Dedicated to healthcare professionals fighting from the frontline, Khan used the platform to talk up the need to work for the welfare of children whose families don't have the means to send them to school or provide them clean facilities.

Daisy Shah and Radhika Madan's goofy performances as well as Sunil Grover's hilarious take on home schooling session were the other highlights of the fund-raising session.

But the highlight definitely has to be the segment that featured his 'nemesis' Arijit Singh' who is showcased crooning some of his famous hits from a televised award show.

Khan who has been at the receiving end of heavy criticism from social media users in the wake of the death of Sushant Singh Rajput, who many fans believe had been sidelined by the movers and shakers of the industry including Khan, seems to be on a PR drive, if this live feed is to go by. And by showcasing Arijit Singh prominently in his show, Khan seems bent upon sending out the message that all is well and good between him and the singer, after they famously fell out.

Interestingly even Amitabh Bachchan's voiceover is a prominent feature of the social initiative.

Khan seemed to be in his elements as he stuck his trademark poses and signature dance moves on a makeshift stage at what seems to be part of his Panvel Farmhouse setting, shaking a leg to Munna Badnam Hua, Baby Ko Bass Pasand Hai, Oh Oh Jaane Jaana, even Hrithik's Bhumroo.

The actor's Being Human Foundation had been in the spotlight when director Abhinav Kashyap had alleged certain mishandling of funds. But Khan seems to have put all this behind him and seemed in absolute form as he hammed his way through the live event.

Whatever issues you might have with the actor, there can be no doubting, here's one celebrity with his heart in the right place and Salman Khan's latest social cause will only win him the blessings of many.

Salman Khan and good friend Kamaal Khan performing to Main Hoon Tera Hero, at a makeshift stage in front of a small gathering (including what looks like his security guards) at what appears to be his farmhouse. Interestingly, the video puts up the disclaimer 'Farm isolated' during certain sections. The actor's good friend Iulia vantur and his brother-on-law Aayush Sharma also got a chance to showcase their dancing skills in different segments.

Khan also used his platform to give a shout out to his friend Sonu Sood who has been garnering a lot of good will for helping migrants stuck in various parts of India, following the lockdown, to reach their respective homes. Sood on his part mentioned how the migrants "are the heartbeat of the country" and it was his duty to help them in their mission.

These were the details of the news Bollywood News - Salman Khan buries the hatchet with Arijit Singh? for this day. We hope that we have succeeded by giving you the full details and information. To follow all our news, you can subscribe to the alerts system or to one of our different systems to provide you with all that is new.