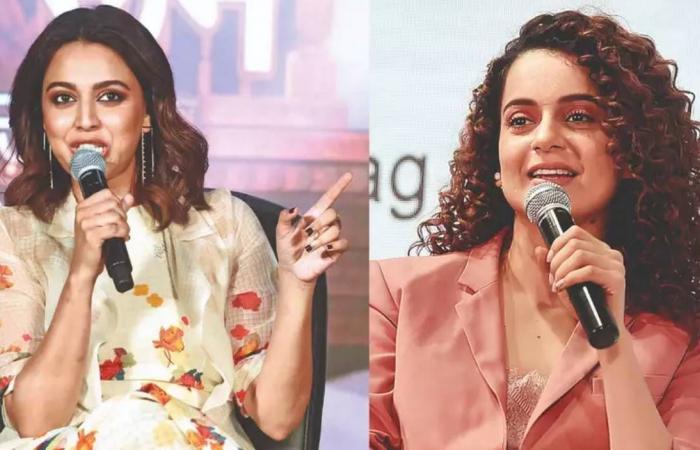 Thank you for reading the news about Kangana Ranaut's team blasts Swara Bhasker for... and now with the details

Aden - Yasmine El Tohamy - The actress had tweeted her support amidst the ongoing nepotism row in the wake of Sushant Singh Rajput's death.

Actress Kangana Ranaut's team has lashed out at Swara Bhasker, who defended Karan Johar in the ongoing nepotism debate in the wake of Sushant Singh Rajput's death.

In reference to Kangana's appearance on Koffee With Karan, Swara had tweeted, "Let's take a moment & acknowledge that @karanjohar took this question on the chin, & answered in a candid & honest manner not taking unwarranted personal offense. Let's also acknowledge that he didn't have the infamous #nepotism comment removed from his chat show which he cud've."

"Parts of India Twitter blaming #KaranJohar and #AliaBhatt for the tragic suicide of Sushant - for some silly game played on a frivolous and pointless chat show (that All those people who are now abusing Bollywood nepotism lapped up) is both the height of idiocy and hypocrisy," she wrote.

Kangana's team responded on Twitter, "Swara while doing chaploosi (excessive flattery) pls don't forget Kangana graced the show after many requests, she was the superstar and KJO was the paid host it is not for him to remove anything if channel wants it, and her voice needs no KJO to reach people."

These were the details of the news Bollywood News - Kangana Ranaut's team blasts Swara Bhasker for... for this day. We hope that we have succeeded by giving you the full details and information. To follow all our news, you can subscribe to the alerts system or to one of our different systems to provide you with all that is new.