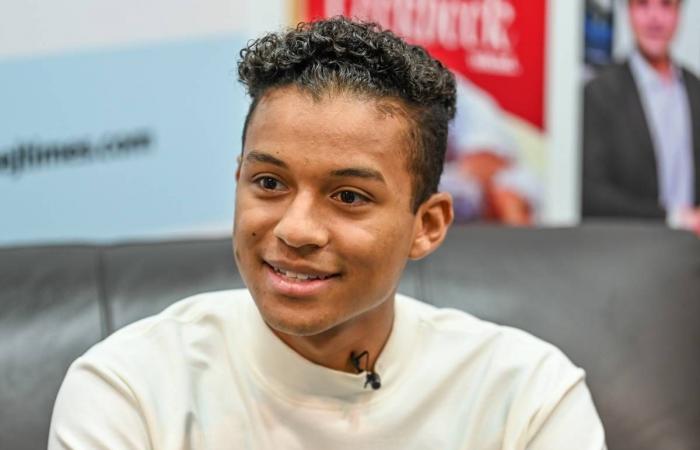 Aden - Yasmine El Tohamy - To sing you have to be born with a voice, and the iconic Jackson family is blessed with the singing gene. "The entire Jackson family has a very similar speaking voice and singing tone. It's difficult to tell us apart unless you really hear us closely. I was born with that voice," says 23-year-old singer Jaafar Jackson, son of legendary singer Jermaine Jackson, and nephew of King of Pop, Michael Jackson.

Though he is naturally destined for a successful career, Jaafar wants to set his own path to fame and he's anxiously looking forward to the release of his first album aptly titled Famous. "A lot of hard work has gone into the album, I hope people will enjoy it," said the singer, who dropped into Al Khaleej Today office on Thursday afternoon to talk about Famous, and all things music. Excerpts from the interview:

Your single Got Me Singing garnered over 5 million views on YouTube, how does it feel when your first song becomes a hit?
It feels really good. I put in a lot of hard work into the single and seeing the reaction from people has made me extremely happy.

There are some killer dance moves in the music video, especially the one where you're dancing in puddles of water on the rooftop? Tell us about that shoot.
The rooftop sequence was actually filmed on the last day of our shoot. We had shot for the music video over two days and we thought why not try something different on the last day. We put lots of water on the terrace floor and shot the song, and it turned out to be the best thing in the video. My shoes and socks were drenched in water! My trousers too were wet. But filming in the water felt nice because Brazil was very hot and humid!

Tell us more about your debut album Famous which is slated for release soon.
This is my first project and it has 11 songs. I've been working on Famous since last January. I collaborated with my friend, Hardy Indiigo for the album. We shared ideas and created this album together. Got Me Singing was the first record I chose to release because I thought that it was a good introduction (to my music). It's global, it's light, fun and you can dance to it. I look forward to sharing some more songs from the album which will hopefully be out in May-June. I'm all fired up for Famous!

How was it when you performed for the first time on stage, alongside your father and brother in The Netherlands with the full Metropole Orchestra singing The Christmas Song a couple of years back?
That was my first time on stage. It was an incredible experience standing up on stage with my father, and younger brother. But it was nerve-wracking at that same time, because before we went on stage my father said, 'Don't mess up, make sure you're on point as we practised'.

What about your younger brother Jermajesty, is he also into music?
My brother is into music production. He's still learning, but we have plans to do music together later.

Growing up you actually wanted to become a professional golfer. When and why did you switch to music?
I started playing golf when I was about 3-4 years old. I would play every day and compete in several tournaments. Then at the age of 13, my father gave me the Jackson 5 song Touch to learn and perform in front of him, along with my little brother. A soon as he heard me, he realised my potential. He then took me to the studio to learn more about music. He would accompany me to the studio to make me feel comfortable because I was very shy growing up. After that, I just fell in love with the creative process in music. I put golf aside to focus on music.

So what else did you learn from your father?
He advised me on things I should do and things I should avoid in music business. He also told me about stuff I should stay away from because there are a lot of things happening in the music industry.

What kind of pressure do you face being a member of the famed Jackson family? What took you so long to come out with your music?
I got into music at 13 and now I'm 23. I wanted to be comfortable with my sound first. That doesn't happen overnight, you have to work at it. I didn't want to rush it.
Talking about the pressures of being from the Jackson family, I really don't think much about it. I'm used to it and don't think of it as pressure at all. I'm just doing what I love to do and I'm doing it with passion. My dad always told me to put my heart and soul into whatever I'm doing and work as hard as I can. People will be able to see that, he advised. I guess, there will always be comparisons, but that doesn't really bother me. I have to live with it.

How was it being with your uncle Michael Jackson. How did he inspire you?
Besides being inspired by my uncle's (Michael Jackson) music, he also inspired me by his humanitarian work. He was also a great human being and did a lot of work for the less fortunate. He was definitely a role model for me in that aspect. His work ethics and his mastery over his craft inspired me greatly and helped with stuff that I do daily; like how to treat people, how to be humble, be kind and grateful, and I learnt that from my father too. Growing up, I used to listen to Jackson 5, my dad and my uncle's music. I would see his performances on television and try to imitate his dance moves. Surely I was inspired by my uncle from a young age.

What are your best memories of Michael Jackson?
Visiting Neverland, playing hide and seek, having fun on the rides, watching movies, those are really good memories. But I never had the opportunity to sing with my uncle because, at that time, I wasn't into music.

You said you were inspired by the music of the Jacksons. Who are the other singers that inspired you?
Oh, there have been so many, including Frank Sinatra, Johnny Mathis, Sam Cooke and Stevie Wonder. One of my favourite songs is Wonder's Isn't She Lovely. I have followed and studied these artistes. I look at their songs as a training exercise to develop my vocals.

Talking about singing, did it come naturally to you or did you have to train to develop your voice?
To tell you the fact, the entire Jackson family has a similar speaking voice and singing tone! Singing is in our genes. It's difficult to tell us apart unless you really hear us very closely. Several people have told me that I should try to sing differently, but that's impossible, that won't be me. I was born with that voice and there's nothing I can do about that. To sing you have to be born with a certain type of voice, but you also have to practice a lot. Training surely helps. I too have undergone training with a vocal coach who taught me how to be comfortable with my voice and how to hit different vocal ranges.

How do you keep yourself grounded?
For me, it's all about music. I love creating music. I love being in the studio. Creating a song from scratch is one of the best feelings for me. That's what keeps me going everyday. Listening to my work makes me feel proud and that keeps me focused on my individuality.

How do you define success?
Being able to travel the world and perform. Being happy, healthy and being around family.

What message do you have for your fans in Dubai?
I am glad to know that people have been enjoying my singing. I'm looking forward to releasing the album. A lot of hard work was put into it and I hope people will relate to my songs and have a blast.

These were the details of the news Bollywood News - New Jackson on the block for this day. We hope that we have succeeded by giving you the full details and information. To follow all our news, you can subscribe to the alerts system or to one of our different systems to provide you with all that is new.