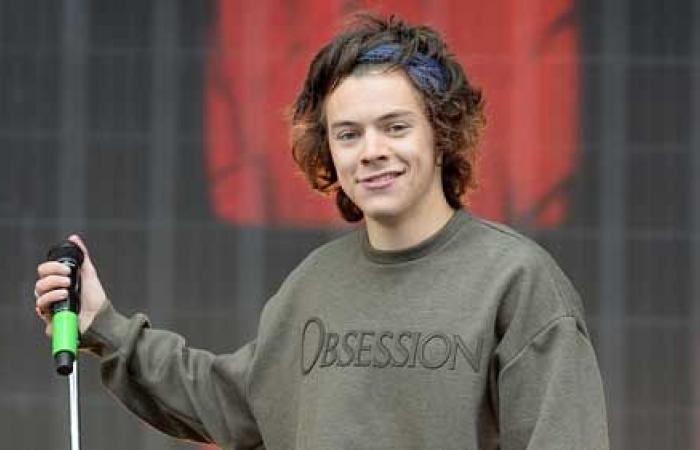 The One Direction star began his solo career in 2017 with the release of his self-titled debut album, and he has now announced the follow-up record, titled 'Fine Line', will be released next month.

In a tweet posted alongside what appears to be the album's artwork, the 'Sign of the Times' hitmaker wrote: "FINE LINE . THE ALBUM . DEC 13 (sic)"

Last month, Harry released new track 'Lights Up', which came as the first song he had released since his debut album.

Harry also shared the video to the song, in which he is largely shirtless and grinds and dances with other scantily-clad people, with the whole group soaking wet.

Other shots in the video include the singer alone in a house and on the back of a motorcycle.

The track was produced by its co-writers, Tyler Johnson and Kid Harpoon.

Meanwhile, the 'Carolina' singer recently revealed he was "nervous" playing his new album for his friend Stevie Nicks.

He said: "It's a double-edged thing. You're always nervous when you are playing people music for the first time.

"You've heard it so much by this point, you forget that people haven't heard it before. It's hard to not feel like you've done what you've set out to do.

"You are happy with something and then someone who you respect so much and look up to is, like: 'I really like this.' "

Stevie has described the highly anticipated follow up LP as "spectacular", and she claimed it is a world away from the music he made with One Direction - and indeed from the material on his first standalone effort.

She said: "It's not like his last album. It's not like anything One Direction ever did. It's pure Harry, as Harry would say. He's made a very different record and it's spectacular."

These were the details of the news Harry Styles to release new album on December 13 for this day. We hope that we have succeeded by giving you the full details and information. To follow all our news, you can subscribe to the alerts system or to one of our different systems to provide you with all that is new.