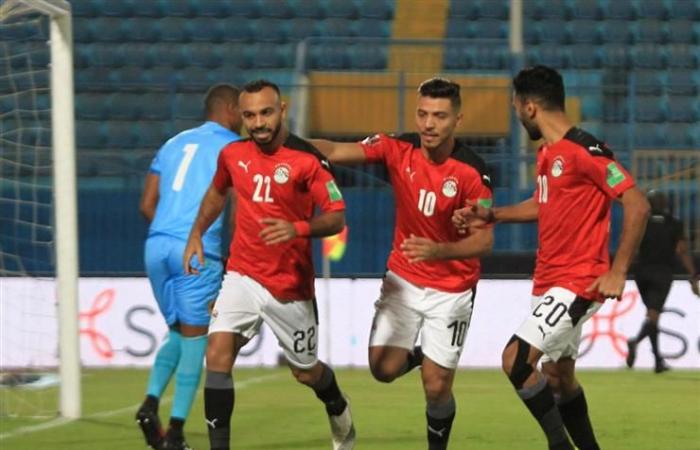 Egypt defeated Angola in the first round of the African qualifiers for the 2022 World Cup in Qatar.

Egypt and Angola will play in Group F alongside Libya and Gabon, who are scheduled to play at the same time.

Egypt’s only goal was scored by Mohamed Magdy “Afsha” in the fourth minute of the match, through a penalty kick.

Egypt shares the top spot in Group F with 3 points after its victory over Angola, with Libya beating Gabon with two goals to one.

Egypt got a penalty kick in the third minute, after Ahmed Fattouh was fouled inside the Angola penalty area.

Mohamed Magdy “Afsha” managed to convert the penalty kick into the Angolan goalkeeper’s net, to open the goals of the meeting.

Hussein Al-Shahat missed a goal opportunity after a long ball from Zizou reached him inside the penalty area behind the defenses of Angola, to be paid by Al-Shahat with one touch that passed to the right of the Angolan goalkeeper outside the field.

Mohamed Sharif missed an opportunity for a sure goal for the team, after a pass from Afsha reached him behind the defenses of Angola, to penetrate and then hit a strong ball, but his ball went out of the field from the top of Angolas goal.

The 76th minute of the meeting witnessed an opportunity for Egypt, through a corner taken by Abdullah Al-Saeed inside the penalty area, which was met by Al-Wansh with an easy header in the hands of the Angolan goalkeeper.

The Egyptian team continued to waste easy chances in the 87th minute, after a counterattack arrived at Mohamed Sharif, who passed the ball to Abdullah Al-Saeed, who hit it easy to reach the ground in the hands of the Angolan goalkeeper.

Mohamed Sharif hit a shot from the edge of the penalty area in the 89th minute, but the Angolan goalkeeper saved it easily.

These were the details of the news Egypt begins its World Cup qualifying campaign with a poor victory... for this day. We hope that we have succeeded by giving you the full details and information. To follow all our news, you can subscribe to the alerts system or to one of our different systems to provide you with all that is new.