Lakes and ponds .. What did the torrents do in Alexandria... 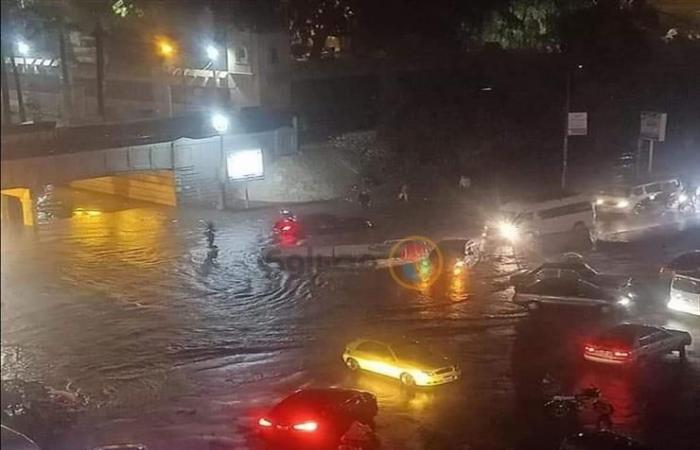 Storms and torrential rains swept Alexandria, reaching the level of torrents, and they lasted 3 hours, starting at 2:00 on Saturday morning.

The rains, accompanied by thunder and lightning, preceded the declaration of a state of emergency in the coastal city, and the governor’s issuance of a decision to suspend studies today in Al-Azhar schools and institutes and the University of Alexandria.

Heavy thunderstorms flooded a large number of the coastal city streets, including the Corniche Road, Abu Qir, and the tunnels, as well as several main and side streets that turned into lakes and ponds.

Alexandria citizens shared photos of the flooding of the city’s streets due to the torrents on social media, which they described with comments including “Alexandria remains the face of the sea” and “The sea remains Bahrain.”

The torrents caused the Al-Mandara tunnel to be completely submerged, which connects the Corniche to the regions of Maamoura, Abu Qir and Tosson, which necessitated the opening of the doors of the Montazah Palace as an alternative path for traffic.

And Major General Mohamed Al-Sharif, Governor of Alexandria, announced this morning the end of the rainwater suction works from the Mandara tunnel, and the re-routing of traffic and cars again.

The “sanitation, drinking water, and Egypt’s renaissance for cleaning work” companies, along with neighborhoods, are continuing efforts to clear rainwater pools from the streets and squares of Alexandria until now.

And 180 cars were deployed to extract water from the streets and squares, in addition to emergency teams to purify 105 thousand applications, and 32 thousand hookahs spread over various neighborhoods of Alexandria.

Major General Muhammad al-Sharif, Governor of Alexandria, conducted several tours in eastern Alexandria regions at night, to follow up efforts to clear rainwater, to ensure the continuation of traffic.

The heads, officials of neighborhoods, and executive companies spread to the areas most affected by the floods, to follow up the work of removing water accumulations and ensuring that they did not reach homes and shops.

The neighborhood operations rooms received several reports, including the explosion of an electricity cable on 23rd Street from 16 Al-Islah, and the high level of rainwater in a Victoria Street, amid fears that it would reach inside the shops.

For his part, Major General Mahmoud Nafie, head of the Sanitation Company in Alexandria, said that the company’s workers and all executive devices supported by compact cars and flood cars intervened in order to withdraw water from the streets and prevent any accumulations.

The head of the sewage company added that more than 80% of the accumulations of water in the streets have been dealt with so far.

These were the details of the news Lakes and ponds .. What did the torrents do in Alexandria... for this day. We hope that we have succeeded by giving you the full details and information. To follow all our news, you can subscribe to the alerts system or to one of our different systems to provide you with all that is new.