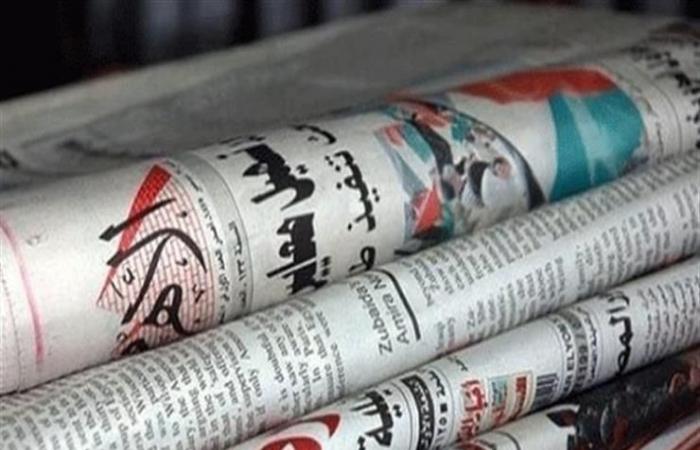 Cairo – (A & A):
Cairo newspapers (Akhbar Al-Youm – Al-Ahram – Al-Gomhoria), published this morning (Saturday), focused on a number of local issues, including President Abdel Fattah Al-Sisi inspecting a number of development projects on the road network in Greater Cairo.

The three newspapers reported that President El-Sisi inspected (Friday) a number of work sites for development projects in the road network in Greater Cairo, especially in the areas of the First Settlement in New Cairo, the Suez Road, and the Mohamed Naguib axis intersecting with Ain Sokhna Road to the Central Ring Road.

President El-Sisi also inspected the entirety of its business from its inception in the eastern regions of Cairo, passing through the Badrasheen Bridge at the top of the Nile River, which connects the cities of Helwan and Badrasheen to the end of business in the areas west of Cairo.

The president also inspected the group of roads and bridges in the axis of the Museum of Civilizations in the Old Cairo region, which is considered the lifeline in the southern region of Cairo as part of the components of the project to develop the historical and heritage area of ​​Ain Sira and Lake Ain Al Hayat.

President El-Sisi discussed with engineers and workers in a number of those sites about the construction executive position of those projects, the daily completion rates, and the timing of their completion. The president directed, to strictly adhere to the standards and specifications of free roads and to apply them, especially on the Central Ring Road, to be in the widest possible width and without traffic intersections, and to use bridges and tunnels to contribute to ending traffic congestion, reducing travel times and reducing the rate of accidents in order to preserve the life and safety of citizens, as well as adhering to the agreed construction timelines. .

In the local issue as well, newspapers highlighted the launch of the first phase of the elections for the House of Representatives in the governorates (Giza, Fayoum, Beni Suef, Minya, Aswan, Red Sea, Alexandria, Beheira, New Valley, Matrouh, Assiut, Sohag, Qena, Aswan) Voting operations are conducted in 10 thousand committees and continue today and tomorrow.

1879 candidates are competing in the single system and 4 electoral lists in the list system, so that the National Elections Committee and the executive bodies in the governorates finished their preparations to receive about 33 million voters distributed in 71 electoral districts.

The Board of Directors of the Judges Club formed an operations room to follow up all stages of polling and counting. Since yesterday, units of the armed forces and the police have deployed to secure the headquarters of the committees and the main axes.
Counselor Lashin Ibrahim, head of the National Elections Commission, announced the commission’s readiness to conduct the elections in a manner befitting the constitutional entitlement, and called on all citizens to participate, noting that the announcement of the results of the first phase is not later than the first of November.

The three newspapers pointed out that the Foreign Ministry spokesman Ahmed Hafez welcomed, on Friday, the permanent ceasefire agreement in Libya that Libyan officials reached in the ongoing talks in Geneva.

The Foreign Ministry spokesman explained that the success achieved came as a continuation of the first direct meeting hosted by Egypt in Hurghada at the end of last September, and he also valued the Libyan military’s agreement to maintain calm on the front lines and avoid escalation, and called on the countries involved in the Libyan issue to contribute to the current effort. And ensuring no escalation.

Hafez expressed Egypt’s aspiration to continue efforts related to the political track and support the efforts of the UN envoy to Libya to achieve the main goal. It is to guarantee the stability of Libya and the preservation of its sovereignty, integrity and territorial integrity, with the necessity of the departure of foreign forces from the country.

Newspapers reported that Prime Minister Mostafa Madbouly chaired the meeting of the Board of Directors of the General Authority for Investment and Free Zones. To follow up on the authority’s efforts during the previous period and review a new strategy developed by the authority to promote targeted investment in Egypt.

The Prime Minister said that during this stage in which the whole world is witnessing contractions in investment, the government is working to solve problems on the ground, in addition to continuing to pursue ways to facilitate procedures with the aim of pushing investments, and at the same time targeting a number of investors who already have investments in Egypt; With the aim of expanding their investments and pumping new investments.

He added: I asked Counselor Mohamed Abdel Wahab, CEO of the Investment Authority, to also tour the provinces. To learn about the most important challenges and problems, with the aim of working on solving them, as well as reviewing the available investment opportunities in his meetings with investors.

He pointed out the importance of providing the appropriate climate to attract more foreign direct investments, especially in light of the current international economic conditions, which carry many changes on the global map, as well as what the Egyptian economy is witnessing in terms of performance development and achieving positive indicators that helped in facing the negative challenges that the world witnessed due to the Corona virus , By working on focusing on competitive economic sectors in Egypt and promoting them according to a plan and timetable for implementation.

For his part, Counselor Mohamed Abdel-Wahab reviewed the efforts made by the authority during the previous period to improve and create the investment climate, noting that bilateral meetings were held with more than 74 major foreign companies operating in Egypt, which wish to expand and inject new investments. In the same context, these companies announced that they will increase their investments in Egypt during the current year in a number of sectors, including the pharmaceutical industries, food industries, communications and information technology, chemicals, and the electronics industry.

The most important measures taken to develop the Authority’s sectors were also reviewed, which included the development of investor services centers and the trial operation of a number of centers in Sharm El Sheikh and Qena Governorate, in addition to referring to the new projects that were approved during the period from January to September this year in the public free zones system for a number of 31 A project with investment costs estimated at one billion and 100 million dollars, providing 3,242 job opportunities, approval of 3 new projects in the private free zone system with investment costs exceeding one billion and 40 million dollars, and approval of new projects in existing investment zones for 152 projects with capital of 875 million pounds.

These were the details of the news Sisi inspects development projects in the road network in Greater Cairo for this day. We hope that we have succeeded by giving you the full details and information. To follow all our news, you can subscribe to the alerts system or to one of our different systems to provide you with all that is new.