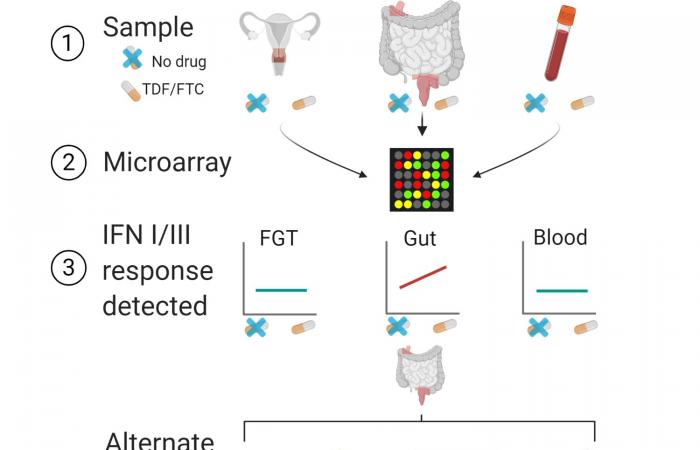 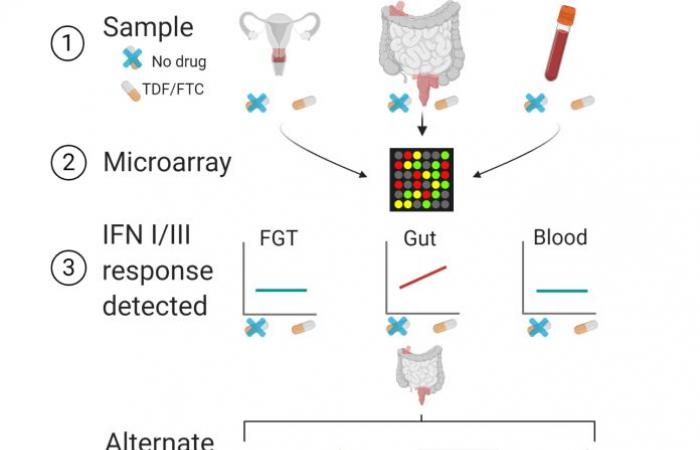 Current antiretroviral therapies (ART) reliably prevent the progression of AIDS in people with HIV (PLWH) if adhered to for life. However, PLWH has a higher incidence of non-AIDS related illnesses and deaths, often defined by low level chronic immune activation that persists in the absence of detectable HIV viraemia. Despite the benefits of ART, this treatment could contribute to the persistent immunodeficiency in PLWH.

Although the nucleoside / nucleotide reverse transcriptase inhibitors (NRTIs) tenofovir disoproxil fumarate (TDF) and emtricitabine (FTC), collectively known as Truvada, are two effective and standard components of ART, their effects on immunodeficiency have not been adequately studied. Sean Hughes, along with colleagues from the Hladik Laboratory in the Department of Vaccines and Infectious Diseases, hypothesized that Truvada could cause changes in the gastrointestinal tract (GI), a known site of chronic immune activation in PLWH and the tissue site where the highest HIV exposure occurs. To test this, they measured gene expression in the GI, female reproductive tract, and blood of HIV-negative people who took Truvada, and published their results in Cell reports medicine.

Using tissue biopsies and blood samples from HIV-uninfected people before and during oral TDF and FTC treatment in three clinical studies, Hughes and colleagues evaluated gene expression using a microarray. They found 13 differentially expressed genes in the GI tissue (rectal and duodenal) of the Truvada treatment group compared to the pretreatment. Although treatment with Truvada induced relatively fewer genes to express, almost all of them were related to type I and type III interferons, a class of cytokines that activate the immune system in response to pathogens. This suggested that oral Truvada might produce previously unrecognized immune activation unrelated to HIV infection. “We have only studied the use of Truvada in people who are not HIV-infected. So we know that the effects we observed were only due to the drug itself and not to HIV infection, ”said Hughes.

Interestingly, neither reproductive tract tissues nor blood showed elevated interferon signatures in response to Truvada, suggesting that these therapies have a tissue-specific effect. This finding might seem surprising, but Hughes explained how this data complements previous research. “Truvada is more effective at preventing rectal HIV infection than vaginal HIV infection. We observed an increase in these antiviral genes in the rectum, but not in the vagina. This anatomical difference in gene expression could explain why Truvada is better at preventing rectal infection than vaginal infection, ”he said.

To confirm the microarray findings, the authors performed RNA sequencing on the rectal samples before and after treatment. Although only one gene that was found to be overexpressed by microarray in the treated samples was also expressed significantly differently via RNA sequencing, the change in fold expression and the direction of the 13 original interferon-related hits between microarray and RNA were correct -Sequencing match, which confirms the trend towards increased immune activation. In addition, the authors used rectal tissue mass spectrometry to confirm five of these interferon-related hits at the protein level.

Finally, the authors used digital droplet PCR (ddPCR) to amplify and quantify the expression of three selected interferon-related genes in samples before and after oral Truvada. Consistent with their previous findings, Hughes and colleagues confirmed that the treatment increased type I and type III interferon-related genes in the rectum and duodenum, but not in the female reproductive tract or blood. In addition, immunofluorescence microscopy showed an increased number of cells expressing the interferon-stimulated gene ISG15 in rectal and duodenal tissues during ART treatment compared to pretreatment, including expression on microfold (M) cells, a subset of intestinal epithelial cells with specialized immune system activity.

This study highlights a paradox in ART where “Truvada is extremely effective at preventing HIV replication,” but “also alters human gene expression,” said Hughes. While “increased expression of type I / III interferon genes could improve Truvada in the prevention and treatment of HIV infection,” he stated that chronically increased expression of interferon-related genes “could also have negative consequences. For example, chronic inflammation in the gut is common in people with HIV, but we don’t know why. Increased type I / III interferon gene expression could lead to chronic inflammation as well as other inflammation-related diseases that are common in people with HIV, such as: B. Cardiovascular diseases. In addition, these effects could interfere with the search for a cure for HIV if they increase the likelihood that HIV-infected cells will survive or even multiply. ”

The members of the UW / Fred Hutch Cancer Consortium, Florian Hladik and Julie McElrath, contributed to this work.

This work was supported by the National Institutes of Health, the Bill and Melinda Gates Foundation, the Microbicide Trials Network, Canadian Institutes for Health Research, the Emory Centers for Disease Control and Prevention, and the James B. Pendleton Charitable Trust.

These were the details of the news The unintended immune effects of HIV treatments for this day. We hope that we have succeeded by giving you the full details and information. To follow all our news, you can subscribe to the alerts system or to one of our different systems to provide you with all that is new.