Researchers deconstruct the “biological clock” that regulates the chirping of birds 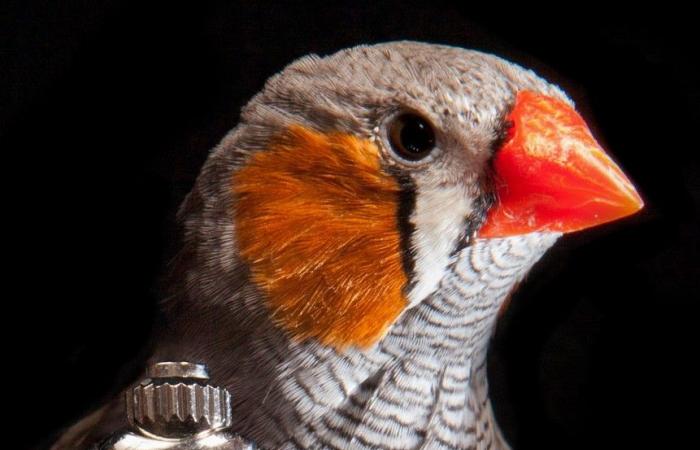 A team of researchers from Penn State and New York University deconstructed an important “biological clock” in the zebrafinch brain and found that the “wires” between neurons, called axons, play a critical role in the precise timing of the birds’ promotional song.

According to a new study, the precise timing of a bridge’s complex song is determined in part by the often-ignored “wires” that connect neurons in the bird’s brain. A team of researchers from Penn State and NYU Langone Health has deconstructed an important “biological clock” that regulates the chirping of birds and other behaviors and leads to new ways of thinking about how neural networks function.

“Many complex, learned behaviors, such as hitting a golf ball or playing the violin, require incredibly precise timing at the neural fire level,” said Dezhe Jin, associate professor of physics at Penn State and author of the paper. “But how the brain regulates our muscles so precisely remains unclear. In this study, we created a model based on years of experimental observations and found that delays in the circuits of neurons play a crucial role in the timing of their fire. We then determined the cause of the delays in the wires or axons that connect neurons. ”

In an article published Oct. 15 in Cell magazine, Jin and colleagues look at timing behavior with the zebra finch, a tiny Australian songbird that is capable of learning a promotional song with the skill of a master instrumentalist. To enable this voice display, finches have a special “clock” – called HVC – in their brain that regulates the timing of the song. In HVC, groups of neurons fire in a predictable order based on the performance of the song.

“HVC is often thought of as a clock because it controls a very intricate clockwork – the song – where timing is so important,” said Robert Egger, postdoctoral fellow at NYU’s Grossman School of Medicine and lead author of the study. “We used state-of-the-art methods to measure the simultaneous activity of up to 70 neurons within the HVC while singing. In the past we had to measure each neuron individually and align its activity with the song. ”

To find out how precise a circuit can be, Jin and his PhD student Eugene Tupikov developed a series of large-scale computational models that describe the neural circuit. In one case, a group of neurons is triggered at the same time, triggering the next group of neurons that are triggered simultaneously, and triggering the next group like falling dominoes in a so-called synfire chain. In an alternative model, delays in the wires allow neurons to fire at slightly different times. The result is a more accurate watch.

“We used to think of each group of neurons firing together as a separate, discrete, second-hand tick,” said Michael Long, associate professor of neuroscience and physiology at NYU’s Grossman School of Medicine and co-author of the paper. “But what we actually see is more like a second hand that moves smoothly and continuously. Distributing the delays across the wires allows for higher resolution because you don’t get those tick points. ”

The team found a large distribution of delays in the circuit, meaning that some signals reach other neurons very quickly and others take much longer.

“We knew that long-distance delays in neural circuits were important, but within local circuits they were considered negligible and, for that reason, often ignored,” said Jin, who led the modeling effort. “These results suggest that axons play a critical role in the timing of neural circuits and should be included in future models.”

To determine whether axonal delays in other brain networks may play a role, the researchers estimated the delays in an area of ​​the rodent brain that senses their surroundings while they move their whiskers.

“Our results were consistent with the delays we saw in the songbird, suggesting that axonal delays can play an important role in shaping neural activity in a number of complex behaviors,” Jin said. “We need to incorporate axon delays into how we think about the brain and how it works.”

The research team also includes Margot Elmaleh, Kalman Katlowitz, Sam Benezra, Michel Picardo and Felix Moll from NYU; and Jörgen Kornfeld at the Max Plank Institute for Neurobiology. This work was supported by the Deutsche Forschungsgemeinschaft, the National Institutes of Health, the National Science Foundation, and the Simons Foundation.

These were the details of the news Researchers deconstruct the “biological clock” that regulates the chirping of birds for this day. We hope that we have succeeded by giving you the full details and information. To follow all our news, you can subscribe to the alerts system or to one of our different systems to provide you with all that is new.