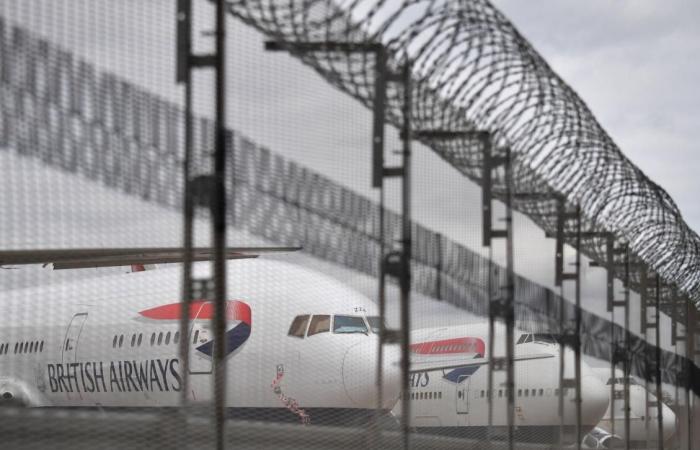 Thank you for reading the news about Union says BA agrees deal to suspend thousands of staff, owner scraps dividend and now with the details

Jeddah - Yasmine El Tohamy - LONDON: British Airways has struck a deal to suspend thousands of staff in one of the airline industry’s most dramatic moves yet to survive the coronavirus pandemic, its union said.
The Unite union said it had agreed a deal with the British flag carrier to furlough workers on 80% of pay, with no cap on earnings, and without anyone being made redundant.
A person familiar with the situation had earlier told Reuters that BA was working on a deal to suspend around 32,000 staff but they were still agreeing the terms.
British Airways declined to comment in response to Unite.
Having already agreed a 50% pay cut for its pilots, the deal addresses around 80% of its cabin and ground crew, engineers and office staff to see it through the worst crisis in its history.
“Given the incredibly difficult circumstances that the entire aviation sector is facing, this is as good a deal as possible for our members,” Unite national officer Oliver Richardson said.
“The deal protects the jobs of BA staff and, as far as possible, also protects their pay.”
Owned by IAG, one of the largest and most financially robust airline companies in the world, British Airways has already said it is in a fight for survival.
Separately, on Thursday IAG canceled its final dividend, saving €337 million ($366 million). The stock had risen on the jobs plan, but closed down 1%.
Hundreds of companies across a range of sectors have scrapped dividends to conserve cash, but the move by IAG marks a particular blow for investors because it was the third highest yielding stock by dividend on the UK’s benchmark FTSE 100.
With planes unable to fly because of travel restrictions, compounded by a plunge in demand over fears of contagion, airlines worldwide have grounded most of their fleets, and many have said they need government support to survive.
British Airways has joined the global industry race to conserve cash. In recent weeks Qantas Airways put two-thirds of its workforce — 20,000 workers — on leave, while Lufthansa applied for short-time work for around 31,000 crew and ground staff at its core brand until the end of August.
British budget airline easyJet has said it will lay off its 4,000 UK-based cabin crew for two months.
US airlines are set to receive $25 billion in grants to cover payrolls over the next six months, but are still encouraging workweek reductions, unpaid leave and early retirement as they face more cancelations than bookings.
The companies are trying to avoid making staff redundant so they can respond quickly to any increase in capacity when a recovery comes.
British Airways had been in talks with the Unite union for a week.
IAG, which owns 598 aircraft across its network which also includes Aer Lingus, Iberia and Vueling, is cutting capacity by 75% in April and May. BA has already suspended flights from Britain’s second busiest airport, Gatwick, and London’s City Airport.
In Europe, more than 20,000 flights departed or landed on Jan. 23. Two months later, after Italy emerged as an epicenter for the virus and travel restrictions went into force, flights dropped to fewer than 5,000 per day.
Britain has launched a job retention scheme which covers 80% of salary capped at a maximum of £2,500 ($3,093) a month. But some airlines including rival Virgin Atlantic have said they will collapse if they do not get more help.

These were the details of the news Union says BA agrees deal to suspend thousands of staff, owner scraps dividend for this day. We hope that we have succeeded by giving you the full details and information. To follow all our news, you can subscribe to the alerts system or to one of our different systems to provide you with all that is new.