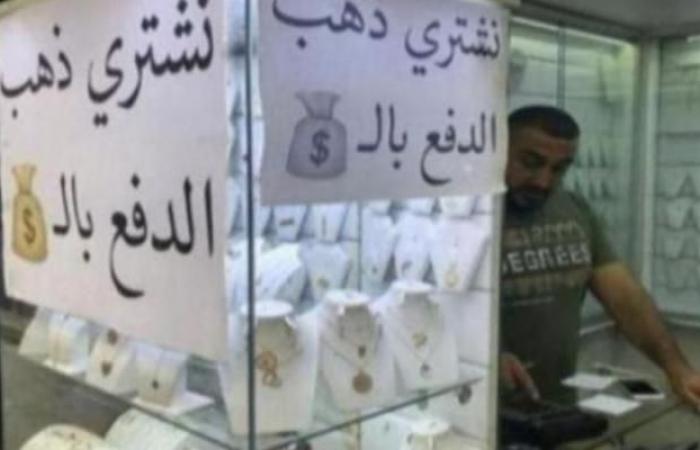 The average price of gold rose today in Lebanon, Tuesday, January 18, 2022, despite the drop in the prices of the yellow metal globally.

The average increase in gold prices in Lebanon came, despite the decline in the prices of the precious metal globally, with the average exchange rate of the dollar against the Lebanese pound in Tuesday’s trading, in the unofficial “black” parallel market, between 24800 and 24900 pounds per dollar.

The price of 21 karat gold today in Lebanon

Regarding economic gold prices in Lebanon today, the average price of a gram of 14 karat gold was about 51,800 thousand pounds ($ 34.14).

The average price of an ounce in Lebanon rose to about 2.761 million pounds (1820 dollars).

Gold prices fell, in trading on Tuesday, affected by the rise in US Treasury yields.

Investors are looking for clues about the timetable for the Federal Reserve’s rate hike from its Policy Committee meeting next week.

Gold is considered an inflationary hedge, but the metal is highly sensitive to higher US interest rates, which increases the opportunity cost of holding non-interest bullion.

Yields on the benchmark 10-year US Treasury rose to a two-year high, reducing the allure of the non-yielding metal.

Gold futures fell during the Asian session, in trading on Tuesday, according to the “Comex” classification of the New York Mercantile Exchange, and gold futures contracts were traded in February, at 1816.35 an ounce (an ounce), a decrease of 0.01%.

Stephen Innes, managing partner at SPI Asset Management, believes that the near-term fate of gold lies in the hands of the Federal Reserve (Fed), and how quickly it raises interest rates over the next half year.

He added, that the metal is likely to remain constrained by the current price range, and may turn lower.

“Every day we’re trying to see how much the Fed’s hawkish interest is in terms of other geopolitical risks engulfing the market, such as the situation in Ukraine, which are still keeping the gold prices on display at the moment,” Ennis explained.

The Bank of Japan raised its inflation forecast for the fiscal year beginning in April, and said risks to the price outlook are equally balanced.

These were the details of the news Gold prices today in Lebanon, Tuesday, January 18, 2022 for this day. We hope that we have succeeded by giving you the full details and information. To follow all our news, you can subscribe to the alerts system or to one of our different systems to provide you with all that is new.