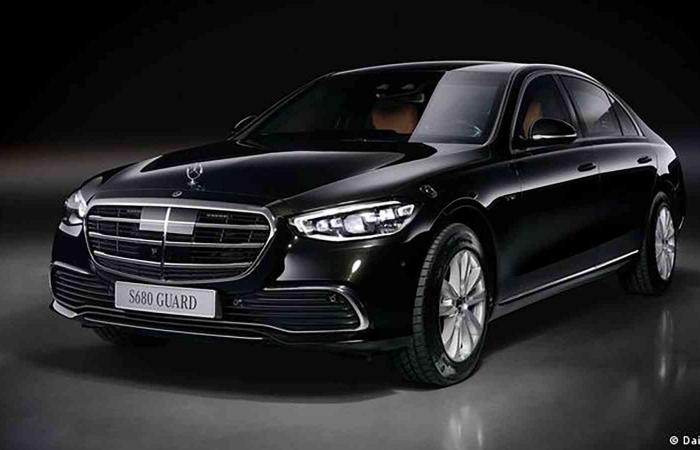 At the beginning of October, Mercedes presented its latest armored car “S680 Guard”, which externally resembles the luxury S-class sedan. But it hides in its board many characteristics that make it one of the safest cars for politicians and businessmen.

The “guardian car” does not only look luxurious, but is also one of the most powerful sedan cars ever made by Mercedes, according to the German DW channel.

As the first and only manufacturer, with the protection class “VPAM VR10″, we meet the highest standards approved for civilian vehicles, Andreas Zigan, Head of Development at Mercedes-Benz, adds to ADAC. What goes beyond this car is only military technology.”

The car has a 12-cylinder engine and works with 680 horsepower, its speed is 190 km / h only because of its heavy weight. But the car wasn’t just built to get away, says Andreas Tsygan, Mercedes’ chief development officer, for the ADAC website.

“It is important to stay inside the car alive in the first 30 seconds of a threatening situation, in addition to keeping the car in motion”, away from danger, he adds. Then the police and SS secure the people in the car.

But in the critical 30 seconds after a potential attack, the car becomes completely fortified, and the car can, according to DW, repel hundreds of rounds and ammunition from the weapons directed at it. Not only is its engine, windows and tires bulletproof, it can also withstand exploding mines.

And the website of the DW channel quoted Tsygan as saying that the car succeeded in tests against 300 bullets and plastic explosives weighing 12.5 kg, in order to obtain the highest approved evaluation of armored cars by the competent authority in Germany. And only the US presidential “beast” car is slightly superior to it against bullets and explosives, according to Tsigan.

And not only that, but it can protect its passengers from an attack by chemical weapons or tear gas. And if the car detects a gas attack, oxygen is released inside, which helps breathing, and while maintaining a slight overpressure, ensures that the gas can’t penetrate inside the car.

A long history in the manufacture of armored cars

For Daimler, the parent company of Mercedes, the “Ranger” car has a long tradition in the company, as the company made its first fortified cars more than 90 years ago and was specially designed for the Emperor of Japan. Since then, about a hundred royal homes, governments, corporate headquarters and churches have been equipped with cars of this type, as the DW website quoted Tsigan as saying.

With these specifications, it can, of course, compete with the presidential cars in the world, and it is as secure as the US presidential “beast” limousines and the Russian presidential “Senate” cars.

But unlike these two cars, which were designed for the “two most powerful men in the world”, namely the president of the United States and Russia, the armored “S680 Guard” is available to anyone who can pay for it, and those who want it only have to hurry to reserve their copies of it, because Mercedes decided to make 400 Just a copy of it.

These were the details of the news Mercedes S680 Guard.. Politicians’ car available to everyone for this day. We hope that we have succeeded by giving you the full details and information. To follow all our news, you can subscribe to the alerts system or to one of our different systems to provide you with all that is new.