Emirates Aluminum wins the award for the most important executive figure... 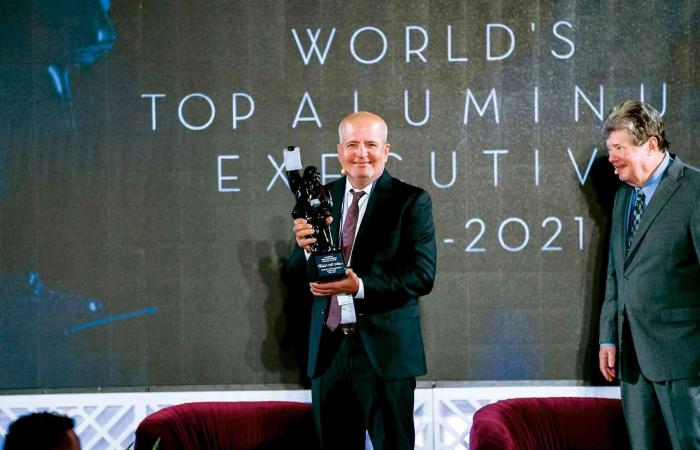 Walid Al Attar, Chief Commercial Officer of Emirates Global Aluminium, was named “The Most Important Global Executive Personality in the Aluminum Sector for the Year 2020-2021” at the annual Aluminum Sector Summit held in Chicago.

The award is given during the annual “Aluminium Harbor Summit” to elite officials in the aluminum sector in recognition of their continued excellence and outstanding contributions to the industry worldwide.

Walid Al Attar was the main architect of the directions of “Emirates Global Aluminium” winning the title of “the most important executive figure in the world in the aluminum sector”, the largest industrial company in the Emirates outside the oil and gas sector, towards doubling the value of its production by focusing on “premium aluminum” manufactured according to specifications. The company is the largest producer of “high quality aluminum” in the world, with a customer base of more than 440 companies in more than 50 countries.

Al-Attar joined Dubai Aluminum in 1984 as a trainee, and started working as a transport administrator in the shipping department, then joined the company’s sales and marketing team in 1994, and played a leading role in moving from selling metal commodities to traders to building direct relationships with factories that use aluminum in their products. Then he became the General Manager of Marketing and Sales in 2005.

When Dubai Aluminium merged with Emirates Aluminium in 2014 to form Emirates Global Aluminium, Al Attar assumed the position of Chief Marketing Officer, and then held the position of Chief Commercial Officer from 2020, responsible for sales, marketing and supply chain. Previously, he was president of EGA America, which is responsible for distributing the company’s products in South America.

Walid Al Attar said: “The award honors all employees of Emirates Global Aluminium, and appreciates their efforts in driving the growth wheel of EGA to be the largest producer of “high quality aluminum” in the world. Our ambition will not stop at the great goals that the company has succeeded in achieving over the past decades, and the position it has reached as one of the giant national industrial companies in its field, but we look to the future with great enthusiasm to build on this success, strengthen relationships with customers, and increase its contribution to the UAE economy.”

For his part, Jorge Vasquez, Founder and CEO of Harbor Aluminium, said: “Walid Al Attar is respected by everyone in the aluminum industry worldwide thanks to his pioneering role in the growth of EGA and his tireless work to set the company as an example in how to manage sales, marketing and relationships clients. I was honored to award this award to Walid, on behalf of his peers working in this field.”

The Harbor Aluminum Summit is held annually as the largest gathering of aluminum manufacturers in the world, attended by more than 360 international companies, and this year marks the thirteenth edition.

These were the details of the news Emirates Aluminum wins the award for the most important executive figure... for this day. We hope that we have succeeded by giving you the full details and information. To follow all our news, you can subscribe to the alerts system or to one of our different systems to provide you with all that is new.