Sports shoes for sale for one million dollars only! Thought... 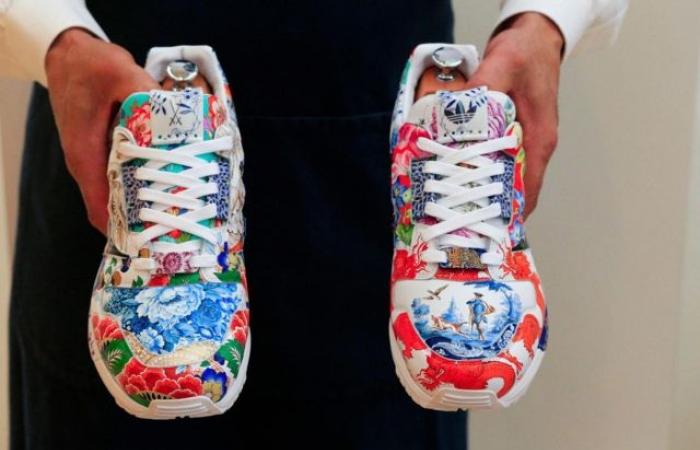 A unique pair of sports shoes designed by sports equipment company “Adidas” and German porcelain maker “Meissen”, may become the first shoe of its kind to sell for a million dollars, according to the expectations of the house “Sotheby’s” that is offering it at auction.

The auction houses began in recent years to focus on selling sports shoes for collectors, but until now they have offered only examples of groups, even if some of them are limited groups.

The model, which is offered for sale online from Monday to December 16, is unique and “Sotheby’s” was valued at between “one dollar and one million” dollars.

The design of this shoe was inspired by the “ZX8000” shoes that Adidas offered for sale and was highly popular. Craftsmen from Maissen painted the shoe, and then attached decorated ceramics to the shoelaces as well.

This athletic shoe is not intended for actual use and therefore cannot be worn.

The design, rarity and price of these shoes may help elevate the collector’s sports shoes market to a new stage.

The price record for a sneaker was broken several times this year, the most recent of which was the sale of the “Air Jordan 1” shoe from Nike for $ 615,000 during an auction organized by Christie’s in mid-August.

Sotheby’s, Sotheby’s, online sales development manager Braham Wachter noted, “There is an evolution in the market that sneakers like this are seen as art.”

Nike was by far the most sought-after among collectors through its affiliate brand, “Jordan Brand”, associated with the historic former American basketball star Michael Jordan.

As for the vice president of the “Stokes” e-commerce platform, he believed that the auction houses benefit from the emergence of the culture of “sports shoes” and “use it to attract a new audience to its system.”

“These very rare products offered by auction houses only receive the attention of the richest 0.01 percent of collectors,” he stressed, while specialized platforms such as “Stokes” provide “access to the rest.”

Braham Wachter expected that displaying other unique shoes at auctions would lead to a change in the market, as it would contribute to pushing new collections of enthusiasts into the market, and lead to a different “dynamic” of prices.

He considered that the auction, which starts on Monday, “constitutes a test.” Proceeds from this auction will go to the Brooklyn Museum in New York and its programs for the city’s youth.

These were the details of the news Sports shoes for sale for one million dollars only! Thought... for this day. We hope that we have succeeded by giving you the full details and information. To follow all our news, you can subscribe to the alerts system or to one of our different systems to provide you with all that is new.