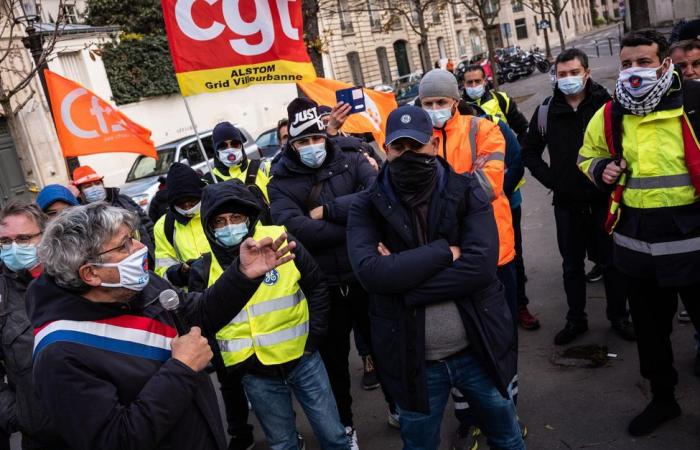 They came to Paris to denounce a “Industrial breakage”. About sixty General Electric employees met on Tuesday in front of the National Assembly, mobilized against a heavy social plan announced in September by the company. “The watchword is employment, explains Bruno Bert, management controller at the Villeurbanne site which produces equipment for electrical networks. He has worked at GE for a little over twenty years. We have seen the degradation for years. Before, everything was done on site, accounting, sales functions… Today, we relocate to India and there is no longer a single sales representative in France. However, we do not sell peanuts, but very specific products, which require strong skills. We walk on the head…”

A union delegation was received in the morning at Bercy. No commitment emerged, apart from a request that will be addressed to the company, with a view to resuming negotiations between employees and management. Employees have started a strike “Total and unlimited” November 23 at the Villeurbanne site.

“We presented alternative solutions. The management sent us a relatively negative response: 60 positions saved. But she did not question her industrial project, details Serge Paolozzi, CGT delegate. A meeting is to take place on Thursday, but the management is asking for the end of the strike as a prerequisite. ” The inter-union refuses. “As long as we do not have discussions around our alternatives, the strike will continue”, warned Serge Paolozzi.

In front of the National Assembly, Tuesday. Photo Albert Facelly for Release

“The story repeats itself”

The social plan provides for the elimination of 634 jobs, more than half of which in the Lyon region. “The story repeats itself…” breathes Philippe Donnet, quality manager, employee for about thirty years. In 2015, the American multinational bought the energy branch of Alstom. With a promise: a thousand jobs created in three years. Promise not kept since. “We are facing a predatory group that wants to destroy jobs, continues Philippe Donnet. All the French sites are targeted by the GE offensive… We are all going to leave feathers there. “

It has been eighteen months that uncertainty hovers around the employees of GE Villeurbanne. A first PSE (job protection plan) was negotiated in 2019, then stopped at the time of the first confinement. “There, we start again from zero”, regrets Serge Paolozzi. However, the new social plan announced by management in September plans to draw an end to past negotiations, drastically revising downward the departure conditions of GE employees.

Place Edouard-Herriot, close to the National Assembly, so they came “Put pressure on the government”. Some rebellious and Communist deputies joined them in the middle of the afternoon. “We must stop this big move which has only one interest: that of the shareholder”, launches Eric Coquerel, LFI deputy for Seine-Saint-Denis, before passing the microphone to Jean-Luc Mélenchon. “We cannot let relocate, repeats the rebellious leader. It is a matter of national interest. ” Rhone deputy Bruno Bonnell (LREM) also addressed a few words, before questioning the Minister of the Economy in the hemicycle, during questions to the government. “In Villeurbanne, I believe that GE can, and must, improve its social plan”replied Bruno Le Maire.

“Before, we had an industrial tool. But it has become a financial tool ”

Baiben Hedi has been working for GE for ten years. “When I got home, it smelled like the factory, the work, there was a soul. Today there is no longer that soul, there is no longer even anything. “ He said bitterly: “Since the takeover in 2015 [de la branche énergie d’Alstom par GE, ndlr] we were destroyed. Before, we had an industrial tool. But it has become a financial tool. ”

They are all disappointed, after having often spent several decades in the company. “No one is responsible for anything at GE anymore… It’s terrible”, cowardly, annoyed, one of them. For another, “The management doesn’t want to hear anything anymore. Just the cash, the cash, the cash ”. Many do not understand the logic of the business. And denounce the millions of euros in public aid received by the multinational since 2015. “It is very difficult to understand the industrial project of the company, acknowledges Serge Paolozzi. And GE has benefited from public funds. We would like the State to look at what these funds were used for. “

“Our cause is just, continues Philippe Donnet. Nobody understands that a company that receives millions of euros in public aid can cut hundreds of jobs. ” Baiben Hedi sighs: “We proposed solutions. Everything was rejected en bloc… I am losing something that I care about. ”

These were the details of the news General Electric: “The management doesn’t want to hear anything anymore. Just the cash, the cash, the cash “ for this day. We hope that we have succeeded by giving you the full details and information. To follow all our news, you can subscribe to the alerts system or to one of our different systems to provide you with all that is new.