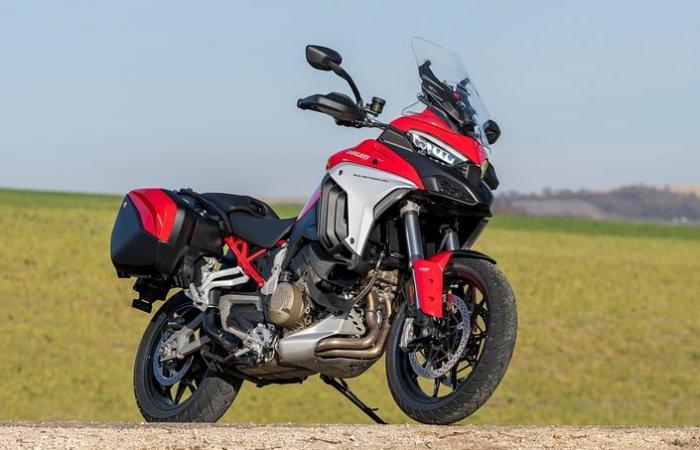 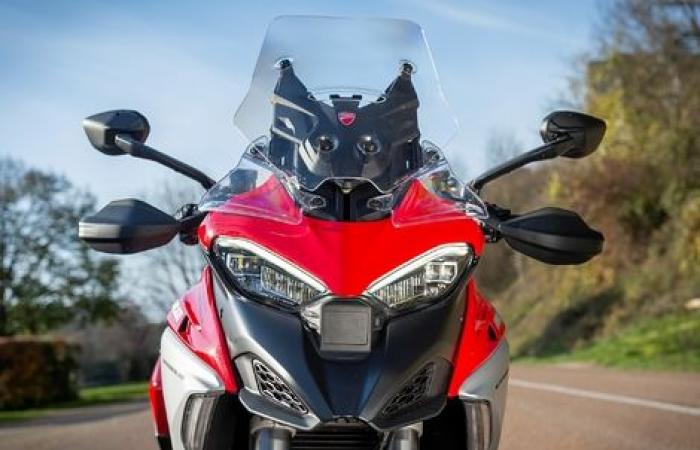 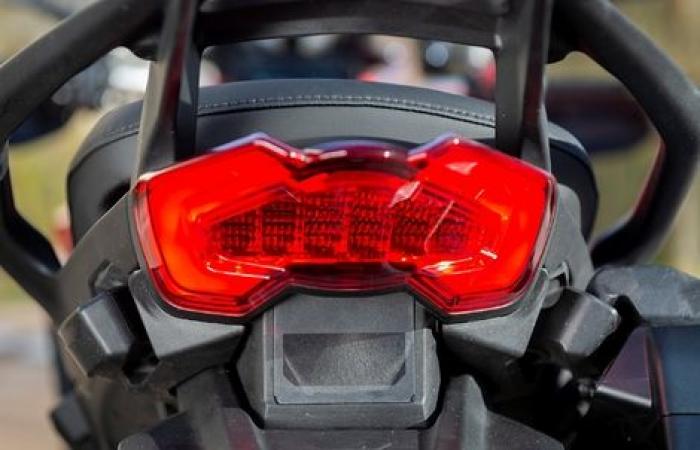 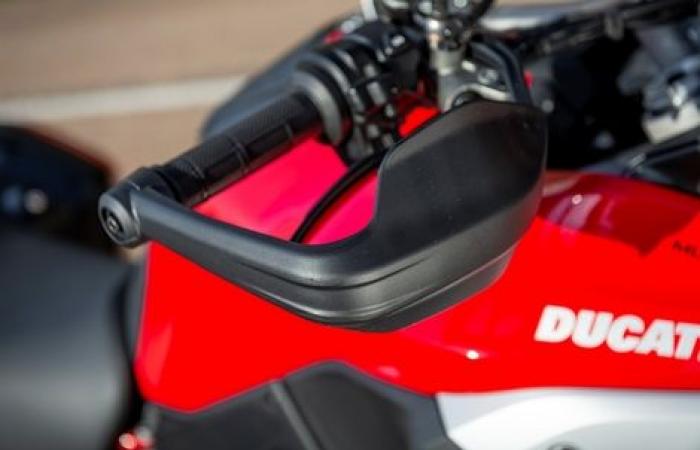 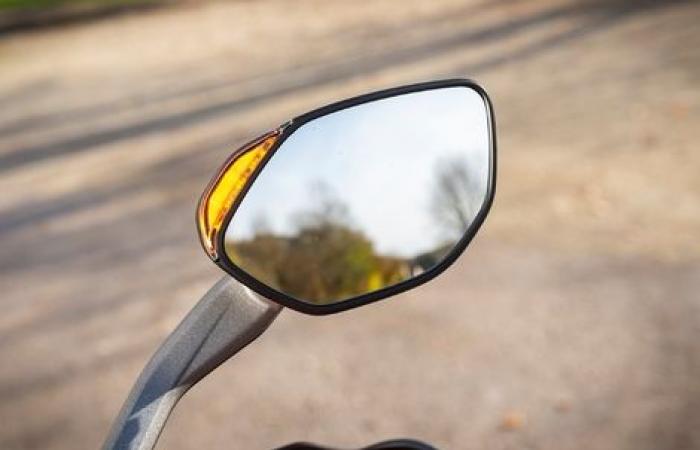 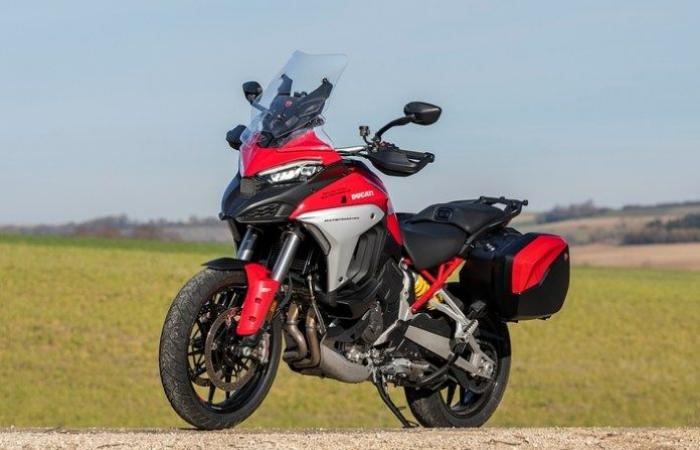 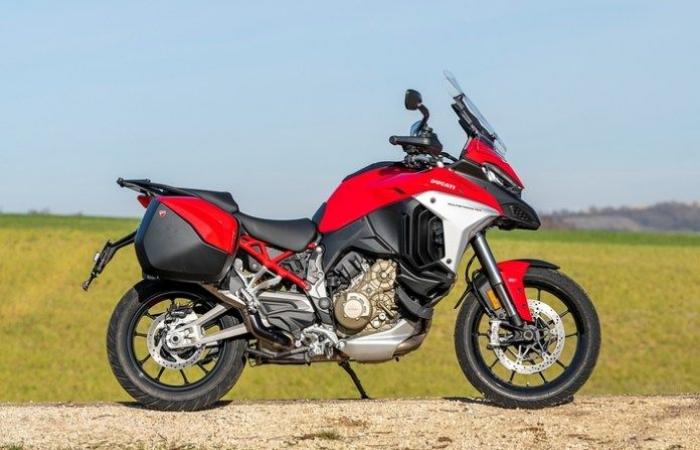 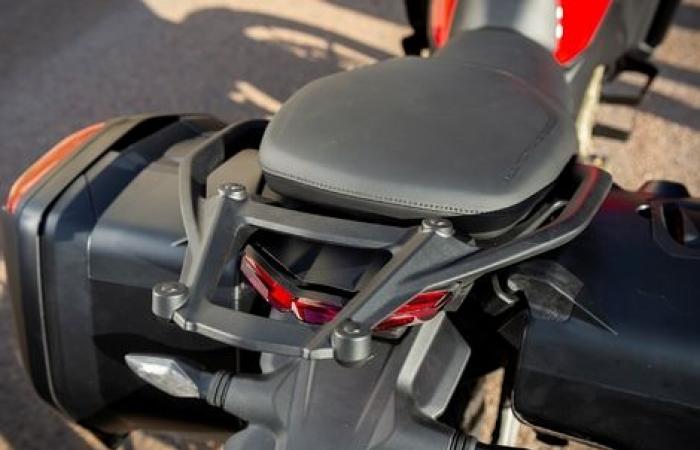 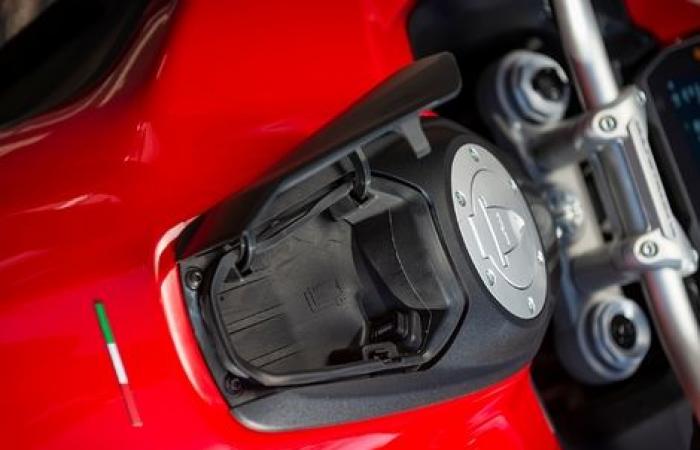 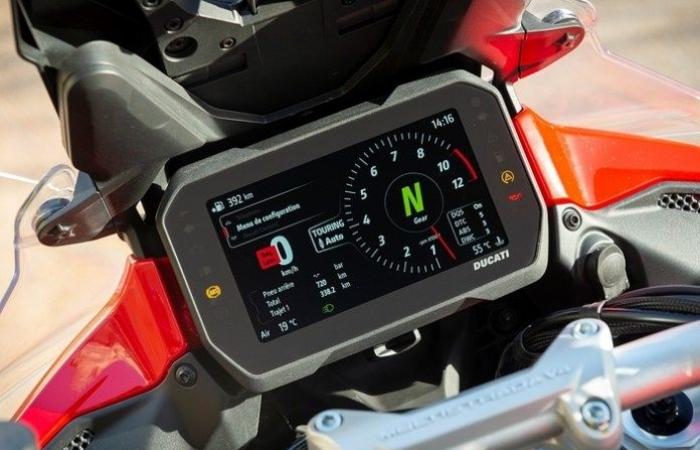 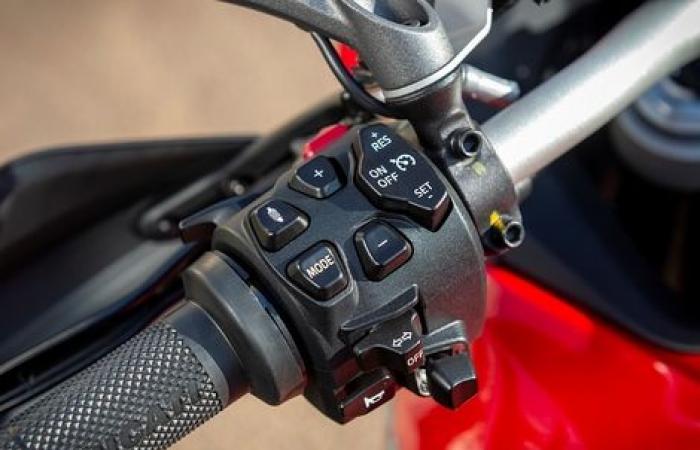 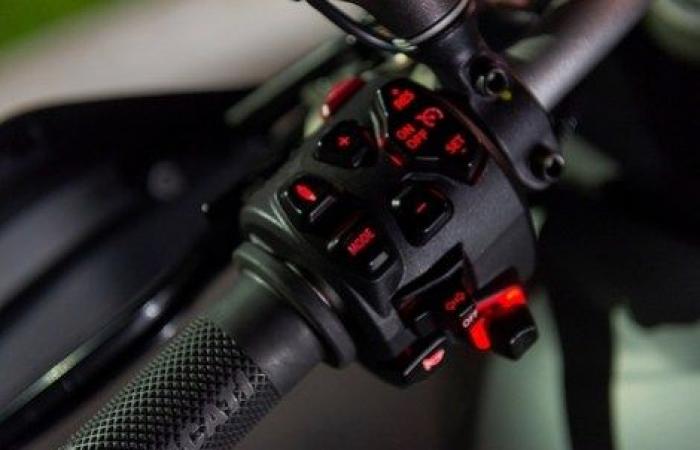 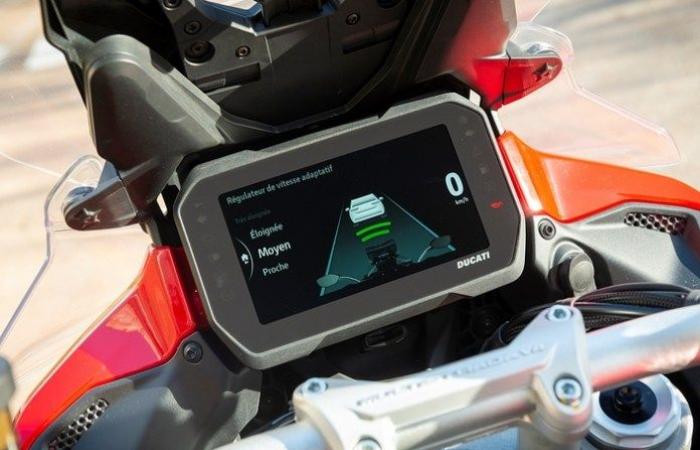 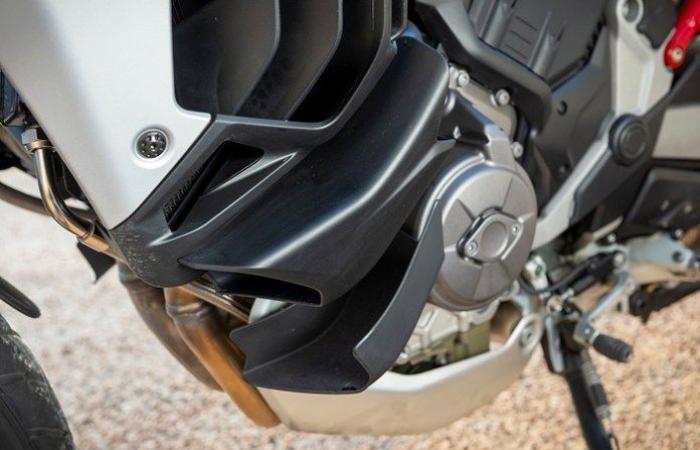 That’s it, the best-selling Ducati trail in the world is getting a new engine architecture. To a whole new architecture, moreover. And that does him a lot of good. It’s quite simple: Ducati has made a clean sweep of an already rich past and the Italian novelty has no shortage of arguments to rake a wide and varied clientele.

First point, the new look of the Multistrada. A happy mix between the current models with V2 engine and that of the StreetFighter V4 with regard to the cooling fins of the legs. More than stabilizing and pinning the animal to the ground, which the assistants can take care of, the purpose of the air flow generated is to effectively drive out the heat given off by the engine. Are you fed up with barbecue, Ducati fans? In any case, the function and the organ are in agreement, was it initially aesthetic. The Multistrada V4 adopts a little shark look, she who was previously a praying mantis. At least for the side gills.

As for the front panel, it was necessary to hold the adaptive LED lighting, but above all the brand new proximity radar. This one is against in the small rectangle of the bow. It therefore logically thickens to give it a little bat-like appearance. What could be more normal when it comes to sonar? In any case, the lines of the V4 remain very pleasant, in particular thanks to the integration of the indicators in the fairing and the optics. We will especially appreciate the contained volumes and always so rewarding. However, the tank still displays a formidable capacity of 22 liters. Admittedly, the weight distribution is rather favorable, but once in the saddle and the tank full, it is still possible to get carried away by weight, let’s face it …

The rear frame of the buckle retains the traditional trellis and above all, it adopts a system for attaching suitcases much more intuitive and efficient than in the past. An excellent point, even if the exhaust in the upright and high lateral position encroaches on the capacity of the suitcase. It is flat, of course, it is as discreet in line as it is in sound certainly, but it still does not make it possible to balance the load. On the other hand, the suitcases are “floating”, in order to best fight against aerodynamic phenomena and side winds. Again, there is thought behind it all!

The original endowment of the Multistrada V4 is among the most copious on the market, not to say that it dominates any other motorcycle from this point of view. The S version crushes the standards of the trail category. Of course, you have to pay the price, with 23 540 € required as an entrance ticket, but for this price nothing is missing. The most daring riders and the BMW R1250 GS or even S1000 XR (see our comparison Multistrada 1260 S against BMW S1000 XR) are quite logically in the viewfinder. However, the German could not offer the same level of service, even with a lot of options.

The electronic package of the new Multistrada makes you dizzy even more than the high-end assistance that has become habitual (anti slip, front wheel anti lift, anti-lock brakes active including on the angle and even gear change without disengaging both ascent and descent), and those that you will discover during our taxiing on the next page (semi-active electronic suspensions among others), are added blind spot detectors, l’automatic emergency braking warning and a world first: the adaptive cruise control of which the representatives of the brand are quite proud. Here again, we come back to its operation in the dynamic test of the motorcycle.

What cannot be ignored, however, is the quality of the instrumentation. Its very good resolution color screen displays a diagonal of 6.5 inches and imposes its presence and its many possibilities. In addition to presenting the plethora of information available, an excellent level of customization, it provides intuitive access to the numerous assistance settings and integrated passive safety features.

The manipulation is carried out by means of the left stalk, which includes a multidirectional joystick of small size, but effective as desired. It will take some getting used to handling the controls, but day or night, skilled hands will find their way. Especially since the commodos are backlit for the viewing pleasure.

So we quickly switch to the automatic stop of the turn signals (incidentally not as good as on BMWs), 4 motor modes, the 4 suspension modes and the 400 settings available … just as we skip the 3-position saddle height adjustment, the numerous practical aspects, among which the deep – but narrow – phone charging compartment (port USB) included in the tank or a small compartment under the passenger seat with Din socket this time and we focus a few moments on the engine and on the cycle part. Once is not custom.

Carrier, the 90 degree V4 from 1 158 cm3 inherits the new type of aluminum front frame announced on future Monsters. In terms of numbers, the power rises to 170 CV while the maximum torque rises to 125 Nm (12.7 mKg) at 8,750 rpm in the most efficient engine mode. Of course, Ducati has not squeezed all these canassons in its “double bi” (it is more compact and lighter than the old V2), without offering the possibility of calming their ardor.

It is customary to say that the V4 combines the advantages of the twin cylinder in terms of torque and character and the extension of the 4 cylinders. In this case, the maximum speed of nearly 11,500 rpm at break and above all the optimum power reached at 10,500 rpm seem to limit the extension. Another surprising choice on the part of the Bolognese firm: the abandonment of the desmodromic distribution device so much promoted over the years and true trademark of the “Reds”, in favor of a more classic, simpler valve spring technology. and above all more suited to the use of the engine, which does not take as many revolutions as its sports counterparts, as we have just seen together. Is.

In compensation, the maintenance interval is increased to a few … 60 000 km. That is the commercial argument! If you sign a purchase order, do not get too attached to your dealer, you are not about to see it again… Except for tire replacements (moreover mixed original on the S version) and possible replacements of tires. liquids (brake, cooling).

By the way, this Multistrada V4 exists in two versions, one of which has spoked rims and more enduring tires. From there to saying that we will be able and know how to use the Multi in the ground, that requires reflection, even with 215 kg only announced dry for the Standard and S Sport versions, 218 for the S version.

An application, a connection between smartphone and instrumentation and we deport many features ranging from navigation to communication. In short, Ducati signs a card full level endowment and nothing is missing. However, such abundance may not be equal to the task. At least if we weren’t on a Ducati …

These were the details of the news Ducati Multistrada V4 S: the multipurpose road trail for this day. We hope that we have succeeded by giving you the full details and information. To follow all our news, you can subscribe to the alerts system or to one of our different systems to provide you with all that is new.