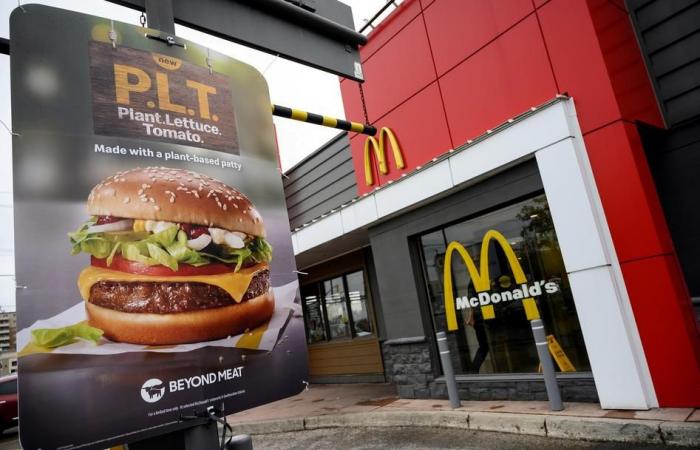 Whatever new and promising startup offers, the giants always have their recipes ready for new competitors, and what they prepare in the secret kitchens will form a rock on which the dreams of the fledgling company are shattered. But that is not all and the competition does not stop, even if every horse has a lag.
This summary largely reflects what happened to Beyond Meat, whose shares slid for a second day, Tuesday, following disappointing quarterly results that reflected weak demand for its products in restaurants due to the Coronavirus pandemic, and what made matters worse, an announcement The “McDonald’s” chain of restaurants is entering the midst of alternatives to meat, through suppliers that it has not revealed, even if it suggests “alternatives” to “Beyond Meat.”

The share of “Beyond Meat” plunged 19%, Tuesday, after a sharp decline of more than 28% after Monday’s trading hours, wiping out more than $ 1.5 billion from the market value of the company, which rushed to announce a new partnership with the Pizza Hut chain in the United States, to present the first Meat substitute pizza. Beyond Mate is still up about 60% since the start of the year.

McDonald’s announcement of a vegetarian product line called “Mac Planet” sparked confusion among investors about whether “Beyond Meat” would be a supplier to the largest American restaurant chain by sales. The fast food giant declined to disclose any details about the suppliers.
On his part, Chris Kempczinski, CEO of McDonald’s, told CNBC in an interview Tuesday, “We have a relationship with Beyond Mate, as they supported us in the Canadian test market … We have not yet made a decision about how we will be and the suppliers who support our global offering, so I don’t want to comment on that »

“McDonald’s” intends to add a series of vegetarian products to its menus under the name “Mac Planet”, thus building a wave of alternative dishes to meat.
This initiative presented by the chain as part of a new strategy in which it relies on chicken products and car ordering services, will allow McDonald’s to compensate for its delay in this area.
Burger King launched its vegan version of the famous “Whopper” in the United States in April 2019.
Other networks such as “Dunkin” and “Starbucks” have also tried to enter the field by offering products aimed at customers who are more keen on protecting the environment or animals or looking for less saturated food sources.

Meat alternatives such as soy steak were launched years ago, but emerging companies such as “Beyond Meat” and “Impossible Burger” have developed in recent years products closer to the characteristics of animal meat in terms of taste, shape and color.
And “McDonald’s” in Canada previously launched a burger with steak made from “Beyond Meat” plants.
It is seeking to introduce its special mixture, made exclusively for “McDonald’s” restaurants, in some markets as of next year.
The restaurant network did not clarify whether it would renew its contract with “Beyond Meat”, only indicating that it would use external suppliers as is the case with the rest of its products.
The range of MacPlant products may expand to include alternatives to chicken, eggs, or sandwiches for breakfast, according to what the group explained during a presentation to investors.
“We are happy with this opportunity, because we believe that we are offering a product with proven value and delicious taste,” said Ian Borden, supervisor of McDonald’s activities in the world, adding, “When customers are ready, we prepare for them.”

McDonald’s still relies on its most popular products, including Big Mac, Mac Nuggets and French fries, which account for nearly 70% of its revenue in the main markets.
“The demand for familiar products in this turbulent period was greater than ever,” the group said in a statement. “(McDonald’s) believes that these basic classics will continue to play their role as an important growth engine thanks to their popularity and profitability.”
Nevertheless, “McDonald’s” is seeking to make some adjustments, including, for example, the use of new types of bread for the burger sandwiches with “improving the approach” adopted in preparing steak dishes.
The chain also seeks to focus on chicken-based products, which achieve greater growth than other egg-based dishes.
After the success of the temporary show on chicken fingers (nuggets) with spices in the United States, “McDonald’s” plans to launch a crunchy chicken sandwich in the country in 2021.

To stimulate its Internet sales, which have already registered significant progress since the start of the pandemic, McDonald’s intends to experiment with a new electronic platform and create a rewards program for customers.
The giant chain also intends to create sites dedicated exclusively to providing order services to cars and to allocate lines for customers who have sent their orders over the Internet.
The group’s global turnover decreased by 2% in the third quarter due to the pandemic. However, this number reflects an improvement compared to the second quarter, which witnessed a 30% decline in sales. McDonald’s also succeeded in achieving a 10% increase in net profits, at $ 1.76 billion.
Almost all of the chain’s restaurants remained open throughout the pandemic.
However, “McDonald’s” pointed out that “due to the renewed increase in the number of cases of Covid-19 since September, we have observed several times restrictions by governments on working hours and the number of people allowed to eat inside in most countries, and in some cases a total closure has been imposed.” For restaurant halls ».
These restrictions affect most of the chain’s main markets outside the United States, including France, Germany, Canada and Britain, according to McDonald’s. (Agencies)

These were the details of the news Meat substitute stock slips in McDonald’s kitchens for this day. We hope that we have succeeded by giving you the full details and information. To follow all our news, you can subscribe to the alerts system or to one of our different systems to provide you with all that is new.