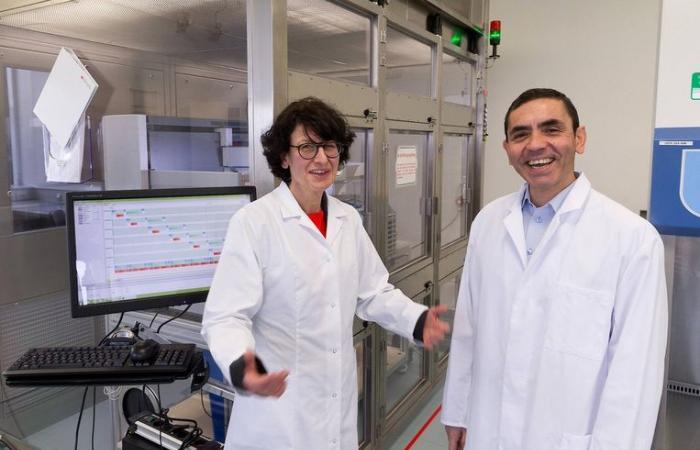 ‘From children of guest workers to billionaires’, was the headline of business site Business Insider recently about Ugur Sahin and Özlem Türeci, founders of the German pharmaceutical company BioNTech. And now the company has also delivered the world’s first effective corona vaccine.

Already food for legends: how Ugur Sahin, professor of oncology and CEO of the German biotech company BioNTech, conceived the plan to develop a vaccine against Covid-19. It was in January, most mere mortals had never heard of the word ‘coronavirus,’ and The Lancet Sahin read an article about the new virus in Wuhan. “I came to the conclusion that this was going to develop into a pandemic,” said Sahin in an interview with the general newspaper. “And so we felt obliged to do something.”

Not immediately logical, for an oncologist who founded the company BioNTech in 2008 to, as it is called in company brochure language, “to change the paradigm with which we treat cancer patients worldwide”. BioNTech does this with RNA molecules, strings of genetic programming language that prompt cells to make their own, tailor-made immune substances, which then have to attack metastatic tumors, melanomas and pancreatic cancers.

But it is also possible with infectious diseases, Sahin knew. In 2019, his company had already made an agreement with the Bill and Melinda Gates Foundation to work on vaccines against tuberculosis and HIV. Because anyone who can program the body a bit with RNA can in theory teach it to repel viruses or bacteria. A new coronavirus from China? Why not.

‘Speed ​​of Light‘was the beautiful German mouthful that Sahin gave to the corona project. Not just as a nice label, he explained in the newspaper, but to make his team aware: the speed of light is what is required here. “Light never stops, is always on the move,” says Sahin.

He decided to free 40 people for the project, all leave where that was possible, were canceled, and BioNTech decided to stimulate overtime with generous compensation. This soon led to several dozen vaccine candidates, two of which remained promising after animal testing. One of these, a substance called BNT162b2, is now emerging as the world’s first successful covid vaccine.

Worth more than Lufthansa

A fine victory for 55-year-old Sahin, who moved from Turkey to Cologne in the 1970s as the son of a guest worker in the Ford factory. He studied medicine, obtained his PhD in oncology, married oncologist Özlem Türeci, who was also born to Turkish parents, and soon began dreaming of new ways to treat cancer, with custom immune cells instead of radiation, chemotherapy or surgery.

Together with Türeci and immunologist Christoph Huber, he began to realize that dream in 2001, first with founding the biotech company Ganymed Pharmaceuticals (which was later sold to the Japanese multinational Astellas) and in 2008 with BioNTech.

And now a vaccine that, according to Pfizer’s reports, works better than most experts would have dreamed. On the stock exchange, BioNTech is now worth much more than Lufthansa, and earlier this year it was announced that the couple Sahin and Türeci have ended up in the top 100 of the richest Germans, with an estimated fortune of 2.4 billion euros.

But they don’t care about the money, people who know the couple swear. “For Sahin, generating income is never in the foreground. His dream is to build something sustainable and lasting, and to develop fundamentally new, better therapies, ”said investor Thomas Strüngmann in conversation with German journalists.

“Our goal is not to achieve maximum market value,” Sahin himself swore General. “We know that certain problems can only be solved through innovation. This is our focus. ”

These were the details of the news First real vaccine comes from a migrant’s son for this day. We hope that we have succeeded by giving you the full details and information. To follow all our news, you can subscribe to the alerts system or to one of our different systems to provide you with all that is new.