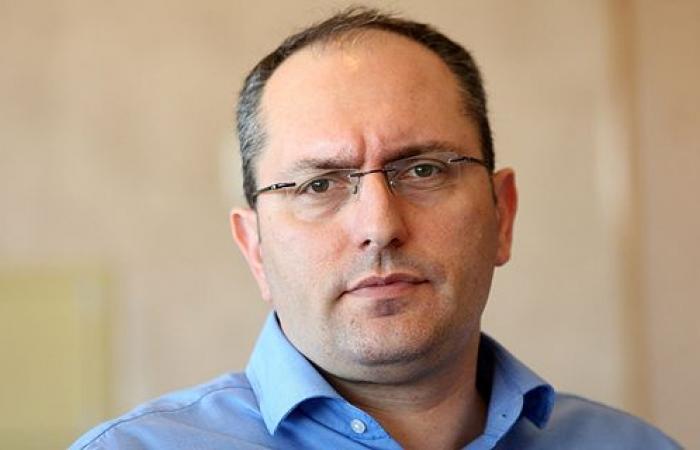 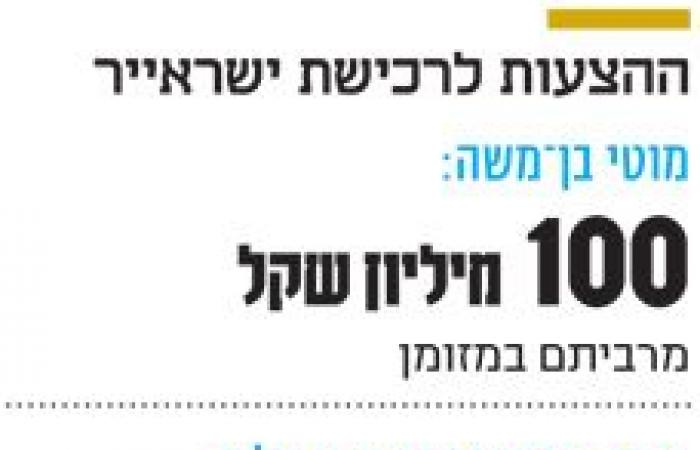 Moti Ben-Moshe offers the highest bid for Israir Airlines. Calcalist has learned that Ben-Moshe submitted the offer yesterday – NIS 100 million, mostly in cash – using blue square oak. The other bidders for the purchase of the airline are Aryeh Friedenson, owner of Chassis from Haifa, which was eliminated from trading in the previous decade, together with developer Amnon Sela, Global Wings, controlled by the Borovich family, Arkia, controlled by the Nakash brothers, and Rami Levy and Haim Shalom. Ben-Moshe, whose interest in Israir was revealed in “Calcalist”, is the most piquant candidate because he already controlled the company through IDB, which he acquired together with the controlling shareholder, Eduardo Elstein in 2014, when Ben-Moshe retired from the investment two years later.

Friedenson and Sela offer NIS 80 million for Israir. Wings Global Leasing offered NIS 60 million, half in cash and half in a new series of bonds in response to Israir shares issued by Global Leasing. In addition, Global offers to lease two large-body Airbus 3 Israelis on an hourly basis. Arkia, owned by the Nakash brothers, owns 70% Its shares offer to merge Israir and Arkia into an existing public company or into a new private company to be established for the purpose of the merger, so that at the end of the merger, Israir’s shareholders, who hold open IDB bonds, will receive shares in the new company that will be listed on the stock exchange. . Israir’s value in the merger will be NIS 130 million, and Arkia’s value NIS 90 million. Receiver Ophir Naor will make 2 or 3 proposals for the next stage.

And at IDB Open, the move to sell control of the DCS continues. Eduardo Elstein met yesterday with receiver Raanan Clear and IDB Elir, the liquidator of IDB Elstein, asked to hear what is expected of him in order to get the support of the bondholders. In addition, Elstein spoke with several institutionalists in the evening ahead of meetings holding the three series today. Elstein asked Naor and Clear for time to think, with the intention of improving his financial offer and collateral to its holders while Tzachi Nachmias, who is bidding on the purchase through Mega Or and partners, announced that he would not upgrade his offer.

Elstein’s situation does not warn him even though Judge Hagai Brenner ruled that his offer is higher and sent a message to the holders that fairness towards Elstein is also a consideration.

The debt of IDB Open is divided between three series. The Promised Series Y will receive the full debt, NIS 890 million, both at the offer of Nachmias and at the offer of Elstein, both of which offer NIS 950 million for 70% of the controlling shares in DSK. The surplus from the inflow should go to the owners of the unsecured T bonds. A debt of NIS 900 million, and for the Tu series with a debt of NIS 237 million guaranteed in Clal Insurance shares, with some of these debts being paid through the other assets of IDB Series 14, which is controlled by Harel, Brosh, Psagot and other institutions, Indifferent to the amount of the said flow, and is interested in the assurance that the money will indeed be flowed. In this respect, Mega Or is perceived by most of the institutionalists in the series as “safer”. So it is doubtful that Elstein will win it.

In the ninth series, the unsecured Elstein receives a certain amount of mistrust after failing to inject the NIS 70 million that Irsa pledged to the company in September. Here the event is different. Currently, the consideration that the holders of this series are supposed to receive from the two bidders is quite similar, which is why the two funds, Brosh and Alpha, also prefer Nachmias’ offer. The collectors demand that Elstein increase the collateral he provided from NIS 154 million to NIS 300 million.

The Alpha Fund, which is managed by Gabi Dishi and holds, like Brosh, 10% of Series I, claims that all attempts over the past few months to reach agreements with Elstein have failed. According to sources in the fund, as early as August 2019, Alpha offered a first settlement proposal that included the replacement of all Clal Insurance shares against debt write-off, and despite agreements reached, they claim, Elstein did not fulfill his part of the agreement. Therefore, Alpha will most likely support Nahmias’ offer, unless a better offer with real feasibility comes up.

Nachmias ‘proposal has another advantage in that it allows IDB holders to benefit from the recovery of DSK, while converting part of the debt into shares. Holders’ meetings will be held today and voting will begin tomorrow. Elstein is expected to appear at the meetings with some improvement to the offer and collateral.

Nachmias, who is watching things from the sidelines, announced yesterday that he will not improve his proposal. The condition of the property on which he is purchasing is not improving, but on the contrary. Aaron Frenkel has already reached a 35% holding in Gev-Yam, DSKS ‘essential asset, and is in an advantage over Properties and Building, DSKS’ subsidiary, which holds 30% of the shares. However, Nachmias is in an agreement with Clal Insurance, which owns 9% of Gev-Yam, and may finance the purchase with a huge loan, so that as part of the deal it will create a block with him against Frenkel at Gev-Yam.

These were the details of the news NIS 100 million on Israir for this day. We hope that we have succeeded by giving you the full details and information. To follow all our news, you can subscribe to the alerts system or to one of our different systems to provide you with all that is new.