EasyJet scales back flying capacity due to lockdowns 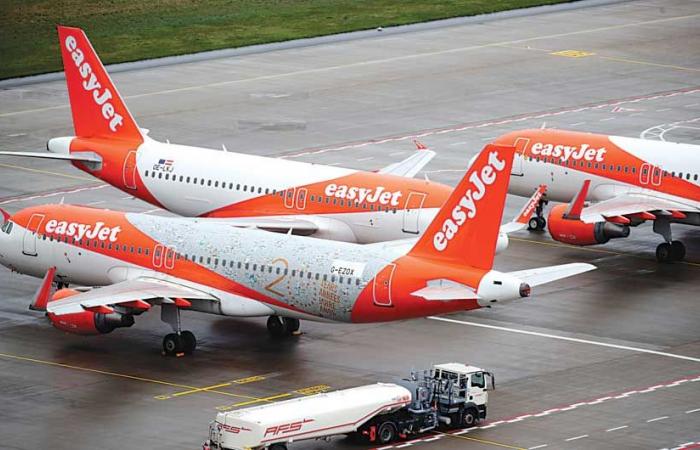 Jeddah - Yasmine El Tohamy - LONDON: The UK Serious Fraud Office (SFO) is investigating Canadian industrial group Bombardier over suspected bribery in airplane sales to Garuda Indonesia, widening a global anti-corruption drive in aerospace.
The plane and train maker is the latest aerospace group to face scrutiny over the use of middlemen after authorities struck a record bribery settlement with Europe’s Airbus in January and a 2017 plea deal with British engine maker Rolls-Royce.
Both settlements involved sales of planes or engines to Garuda and airlines in other countries.
“The SFO is investigating Bombardier Inc. over suspected bribery and corruption in relation to contracts and/or orders from Garuda Indonesia,” it said.
“As this is a live investigation, the SFO can provide no further comment,” it added.
Bombardier said it had been informed about the SFO probe several weeks ago and would cooperate, appointing external lawyers to run an internal review.
At the center of the case, Bombardier said, are five procurement processes involving different manufacturers, including the 2011-2012 acquisition and lease of Bombardier CRJ1000 regional aircraft by Garuda.
Bombardier, which has undergone several changes of leadership after costly industrial bets in the past decade, said the SFO was investigating the same transactions that led to a former Garuda CEO being convicted in May.
It sold six CRJ1000 regional jets to Garuda in 2012 and simultaneously leased a number of similar jets. Garuda now has 18 of the jets in its fleet, according to its website.
Irfan Setiaputra, Garuda’s current CEO, said in a statement on Friday the airline would cooperate with relevant authorities. Indonesia’s state-owned enterprises minister, Erick Thohir, also said the government would cooperate.
An Indonesian court in May handed Emirsyah Satar, Garuda CEO from 2005 to 2014, an eight-year jail sentence for bribery and money-laundering related to procurement of planes and engines from Airbus and Rolls-Royce.
In 2017, Rolls-Royce agreed to pay more than $800 million to defer charges after an investigation by the SFO and US Justice Department into alleged bribery.
Airbus in February agreed to pay a record $4 billion in fines after reaching a plea bargain with prosecutors in France, the UK and US over alleged bribery and corruption stretching back 15 years.
Under a system of deferred prosecution agreements available to the SFO, companies can be offered the chance to settle cases with a fine and escape corporate criminal charges by helping to investigate themselves and undergoing radical internal changes.
Bombardier CEO Eric Martel, who was appointed in April, told reporters: “We got contacted a couple of weeks ago and we’re going to offer our support so they can do the investigation they need to do.
“We were not aware of any issue internally,” he added.
Under the system of plea bargains used in UK corruption cases, companies can be at a disadvantage if the probe was thrust upon them but win more lenient fines if they bring potential wrongdoing to the attention of authorities themselves.
Nonetheless, Rolls-Royce avoided a larger fine by demonstrating what a British judge described as “extraordinary” cooperation even after the probe was instigated by the SFO.
Airbus has undergone a radical overhaul of its top ranks since reporting itself to the SFO in 2016. The four-year probe however weighed on sales and relationships with airlines and led to in-fighting over who should carry the blame for using agents.
Bombardier has already undergone significant upheaval since 2015 while trying to bring a larger narrowbody jet to market.
It completed an exit from commercial aviation this year by selling its money-losing regional jet business to Japan’s Mitsubishi Heavy Industries to focus on more profitable business jets.

These were the details of the news EasyJet scales back flying capacity due to lockdowns for this day. We hope that we have succeeded by giving you the full details and information. To follow all our news, you can subscribe to the alerts system or to one of our different systems to provide you with all that is new.