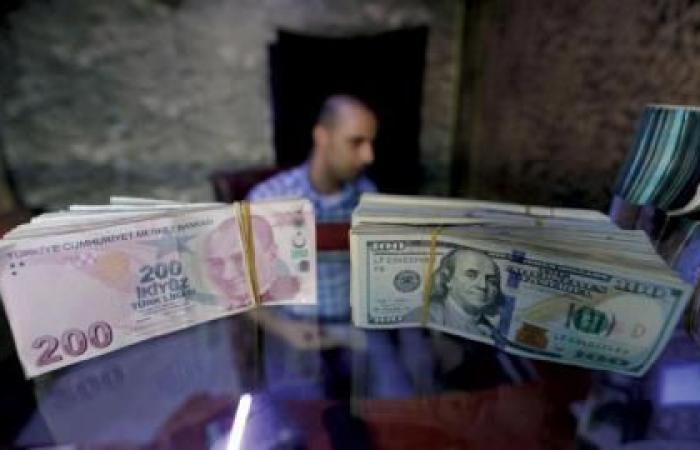 As the Turkish lira continues on its crushing path against the dollar, data from the Turkish Statistical Institute showed yesterday (Friday) that the country’s foreign trade deficit grew 189.6 percent year on year in September, reaching $ 4.828 billion, according to the public trading system.
The institute said that Turkish exports increased by 4.8%, while imports jumped by 23% compared to September 2019. In the first nine months of the year, the trade deficit jumped 79.5% to $ 37.86 billion.
This comes as the Turkish currency continues to collapse, reaching a new low yesterday, reaching 8.35 pounds against the dollar, its worst level ever, amid fears of deteriorating financial conditions in the country, which has become a burden on Turkish citizens.
Tensions in relations with the United States, conflict with France, conflict with Greece over maritime rights, and battles in Nagorno Karabakh raised investor concerns, which negatively affected the currency’s performance.
The Turkish lira has lost 26 percent this year and more than half a campaign since the end of 2017. It is the currency that performs worst in emerging markets.
The Turkish economy has been in a downward trend since before the currency crisis in 2018. This was repeated with the Corona crisis this year. Recent reports indicate that more than 40% of Turks live below or near the poverty line.
Although Prat Al-Barak, Minister of Finance and Erdogan’s son-in-law, tried to play down the collapse of the pound and the economy, the pound’s decline added pressure on inflation, which is at 11.75 percent annually, driving up the prices of basic commodities like energy and fuel. Certain. Significant imports. Foreign investors also sold $ 13.3 billion of Turkish stocks and bonds during the current year, the highest level since 2005.
Experts indicate that Turkey has spent its cash reserves faster than any other economy in the development process, as part of its efforts to support the country’s currency, which raises concerns about Turkey’s financial situation in the near future, especially the risks of imposing sanctions on Wonka on Ankara.
And Bloomberg expects Turkey’s central bank to move again, forcing it to raise interest rates dramatically to prevent the pound from collapsing. She explained that since the beginning of October, the Turkish currency has lost about 7 percent of its value against the dollar.
For years, Turkey’s central bank appears to be sticking to its moves, with President Erdoan opposing raising interest rates and even firing the former central bank chief after resisting pressure to cut them.
Bloomberg compared the causes of the current decline and currency crash two years ago, which forced the “central bank” to raise borrowing costs by 625 basis points, as the catalyst is a combination of increased geopolitical risks and concern that monetary policy remains “too loose”. So that the currency cannot be fixed, while investors say that if it does not include losses, the “central bank” may finally be forced to take action before the next meeting scheduled for November 19.
This is not the first time that the Turkish central bank has had to raise the interest rate, as it made a decision to double the interest rate in January 2014, in a surprise meeting that was not on the agenda, and then raise the interest rate by 300 basis points. The basis is in an emergency meeting in May 2018 to limit the pound’s losses.
“There is no reason why the pound should not rise to 9 pounds for the dollar in the coming weeks,” said Theta Goss, chief economist at Commerzbank AG in London, adding that raising emergency rates may be the only solution available in politics. Cash in exchange for the Turkish “center” to stop the series of losses.
Meanwhile, separate data from the Statistics Institute on Friday showed that state revenue in the third quarter fell 71.2% to $ 4.04 billion. Tourism, Turkey’s main source of foreign currency, has been hit hard this year by the virus epidemic.
Data from the Turkish Ministry of Tourism also showed that the number of foreign visitors to the country decreased by 59.4 percent year on year to 2.2 million in September. The data showed that the number of foreign visitors in the first nine months of the year decreased by 74.03 percent to 9.46 million.

These were the details of the news Turkey’s trade deficit doubles as the pound depletes for this day. We hope that we have succeeded by giving you the full details and information. To follow all our news, you can subscribe to the alerts system or to one of our different systems to provide you with all that is new.