The Turkish lira is competing with the “peso” in bankruptcy …... 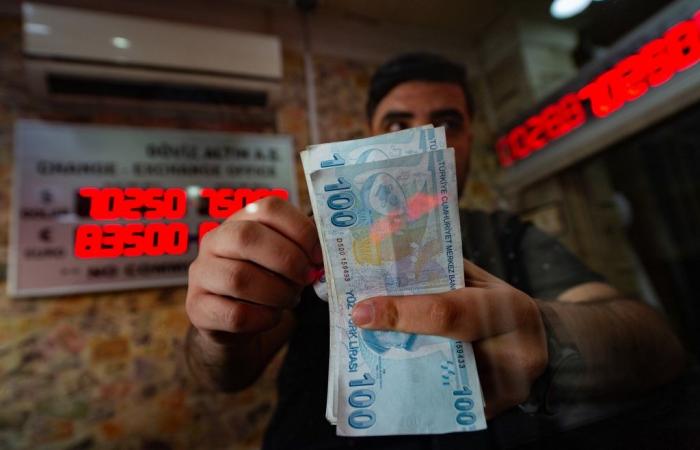 It has become difficult to write news about the exchange rates of the Turkish lira on a daily basis, due to its excessive fluctuations. Between writing this report and publishing it to readers, new record levels can be seen in the currency, which is experiencing a free fall, for the fifth consecutive day, in light of deficit and useless justifications on the part of Turkish government.

With the decline in the value of the Turkish currency, the purchasing power of citizens decreases, the burden of corporate and public debts increases, and the costs increase in industry, in a country whose economy stands on a “tipping point”, against the background of the government’s political ramifications, which have escalated, in the past months, in new files, in Azerbaijan and the Eastern Mediterranean, and finally the clash with France, which is still going on until now.

The lira recorded its lowest level at 8.32 against the US currency, thus losing about 28 percent of its value, since the beginning of this year, and according to what the “Al-Hurra website” monitored in Turkish newspapers, it expects new collapses of the Turkish lira, in the coming days, without There is no limit to its stopping.

The newspaper “sozcu” published a report under the title “The Turkish lira competes with the Argentine peso, with its depreciation,” and compared its weekly position from year to year, and over three years against the US dollar, noting that “the performance of the lira against the dollar competes with the peso that went bankrupt.”

The newspaper says that “Turkey is going through a currency crisis again, as the Turkish lira is witnessing a state of free fall against the leading currencies in the world such as the dollar and the euro (…) As of today noon, the level was 8.32 for the dollar / Turkish lira and 9.77 in the euro / Turkish lira. “.

The problem is not today

Albayrak said that his country’s government has set a new economic program that aims to achieve growth of 5.8 percent for the next year 2021, and 5 percent for the years 2022 and 2023, while expecting a growth of 0.3 percent at the end of this year.

The program announced by the Minister of Finance includes strategic reforms in the financial markets, supporting the effective distribution of resources, and raising the level of financial awareness, adding that he expects the Turkish budget deficit to gradually decrease with the new program by 3.5 percent of GDP by the end of this year.

Professor of Financial Management at the Basaksehir Academy, Dr. Firas Shabu, points out that the decline in the Turkish lira is linked to economic and internal factors, including external factors as well.

“The internal reasons are the huge injection of money into the market, especially in light of the Corona pandemic, as the Turkish government pumped more than 200 billion pounds into the market, which led to its full saturation with money,” Shaabo said in statements to Al-Hurra website.

The economist explains that “a currency is like a commodity, the more it is supplied, the lower its value.”

Shaabu points to another internal reason for the collapse, which is “the low interest rate (8.25 percent), which encouraged Turks to borrow heavily, in a scene not seen before in the last ten years.”

The foregoing was the gateway to the collapse of the lira to below 8 lira per dollar, according to the doctor in economics, who says that exceeding the price of 8 lira is related to the failure of the Turkish Central Bank to take a decision to raise the interest rate, which was directly reflected on the market.

“Besides not raising the interest rate by the Turkish central bank, the latest indicators of the third quarter of 2020 indicate that the volume of exports in Turkey and tourism are unprecedentedly weak, and without expectations, which is also reflected in the exchange rate,” Shaabo added.

It is scheduled to meet the “Turkish Central Bank” in his next tour, on November 19, and according to expectations, he may be forced to raise the interest rate, in order to stop the series of collapse, which will not stop at the 8-pound barrier only.

And in the event of raising the interest rate in the coming days, this will not be the first measure. According to Bloomberg Agency data, the Turkish Central Bank raised interest rates by 300 basis points in an emergency meeting in May 2018 to limit the losses of the lira and more than doubled it in an unscheduled meeting. In January 2014.

Is it sufficient to raise the interest rate?

Despite linking the collapse in more than one angle with the interest and not raising it on the part of the “central”, economists have gone beyond the borders, and indicated that the policies taken by the government in more than one axis had a great impact on what the national currency was witnessing at the time. Present.

The essence of the problem, according to Bloomberg, lies in the continuing concern of investors about the influence of President Recep Tayyip Erdogan on monetary policy, noting that he “puts a premium on growth and job creation and adheres to an unconventional view that low interest rates lead to lower inflation.” .

Speaking to Al-Hurra, a professor of financial management at the Basaksehir Academy, Firas Shaabu, predicted a new collapse of the pound, saying: “The 8-pound barrier has become a thing of the past and behind the back, and we may witness a deterioration towards 10.00 liras for one dollar.”

The economist explains that “the decline of the pound depends on the government’s measures and its ability to activate monetary policy tools, including raising the interest rate and controlling the size of the currency in the market.”

He indicates that “the economic situation does not predict that the situation will improve, as a result of the outbreak of Corona again, and with talk of new ban measures in Turkish cities.”

These were the details of the news The Turkish lira is competing with the “peso” in bankruptcy …... for this day. We hope that we have succeeded by giving you the full details and information. To follow all our news, you can subscribe to the alerts system or to one of our different systems to provide you with all that is new.