A sharp decline in the world’s stock exchanges amid fears of... 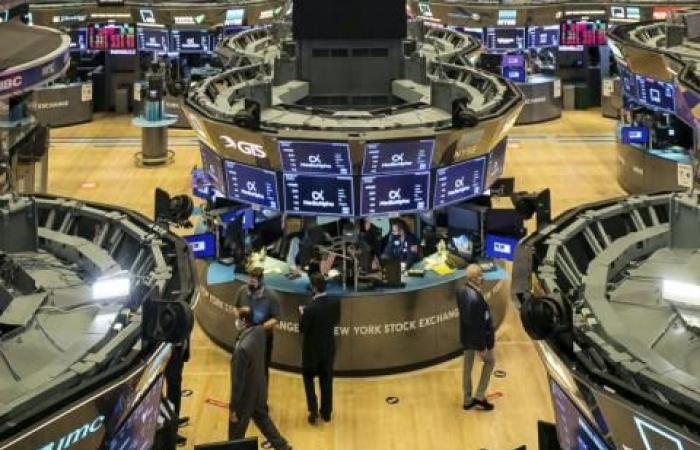 Wall Street recorded a sharp decline today (Wednesday), similar to European stock markets, which fear imposing new restrictions to curb the spread of the “Covid-19” epidemic, which affects investor sentiment, according to the French Press Agency.
In New York, the Dow Jones Industrial Average fell 3.03 percent to 26,631.16 points, while the NASDAQ technology stocks index, which reached its lowest levels in recent months, lost 3.07 percent to 11,080.81 points.
At the beginning of the session, the Dow Jones index lost 2 per cent and the Nasdaq 1.75 per cent.
Global stock markets were also under pressure as investors feared tightening restrictions in Europe to prevent the spread of Covid-19.
The Frankfurt, Paris and Milan stock exchanges recorded a decline ranging between 3% and 3.6%, as well as the London Stock Exchange, which lost 2.27% of its value.
European and American concerns about the high number of new Corona virus infections affected to a lesser extent the financial markets in Asia, which recorded a slight decline.
This concern also affected oil prices. The price of a barrel of US West Texas Intermediate crude for December delivery has fallen by more than five percent, while the price of a barrel of North Sea oil has fallen by just under five percent.
The Covid-19 epidemic has killed one million 168,750 people worldwide since the WHO office in China announced the outbreak of the disease at the end of December 2019.
More than 44 million 56 thousand and 470 cases of infection have been officially diagnosed since the beginning of the epidemic, of which 26 million and 694 thousand and one hundred have been cured.
A total of 516,898 new infections and 7,723 deaths were recorded.
The increase in the number of daily infections is partly explained by the increase in examinations since the first epidemic wave in March and April.
Germany is studying the possibility of imposing strict new measures to contain the second wave of the “Corona” virus, including closing bars, restaurants, sports and cultural institutions for a month, according to proposals by Chancellor Angela Merkel’s government that will be discussed, Wednesday, with the regions.
For its part, France is heading on Wednesday to announce the re-imposition of a general stone in the country, less stringent than the first stone during the spring, to confront the return of the widespread outbreak of Covid-19 that killed 300 people in hospitals within 24 hours.
In Italy, demonstrations have increased against the new restrictions affecting the work of certain professional groups.
At the height of the first wave of the epidemic, governments and central banks of the world’s major economies provided enormous support to curb the looming recession, and this allowed stock markets to recover from the horrors of February and March and recover until the end of the summer.
“It is not immediately clear that the budget support will be very large the second time around, and this is the reason for the decline in stock markets,” said Michael Hewson, an analyst at CMC Markets.
As evidence of this, he added, in the United States, one week before the presidential elections, “it seems that there is no desire to launch a fiscal stimulus plan before the end of the first quarter of next year.”
US President Donald Trump promised yesterday (Tuesday) a “better” economic aid program, but after the presidential elections that will be held on November 3, accusing the leader of the Democrats in the House of Representatives, Nancy Pelosi, of not negotiating in good faith and discussions about the value of the new support plan are stalled. .
For its part, the European Union is still in the process of implementing its budget and the first recovery plan of 750 billion euros that was adopted in July and that Italy and Spain badly need.
Tomorrow (Thursday), European Central Bank President Christine Lagarde will chair her eighth monetary policy meeting in this European financial body to study any new information about financing the economy in particular.
“It is possible that the European Central Bank will not announce any changes tomorrow,” said Milan Katkovic, an analyst at the “Active Trades” group, but “this is an opportunity for its president, Lagarde, to calm the markets and pave the way for new measures in December.”
Meanwhile, job cuts continue. On Wednesday alone, the Celio Group announced the closure of 102 stores in France and Boeing canceling 7,000 additional jobs until the end of 2021.
Independently of the epidemic, investors are watching the corporate earnings season and the IT sector has taken heavy losses. At the bottom of the CAC 40 index, the share price of ATOS fell 6.58 percent to 58.50 euros. The prices of “Altun” (13.7 percent) and “Supra Styria” (13.60 percent) also declined.
Fears of tightening restrictions lead the tourism sector, with shares in Intercontinental Hotels Group losing 1.04 percent of their value, and AIG, the parent company of British Airways, by 3.34 percent.

These were the details of the news A sharp decline in the world’s stock exchanges amid fears of... for this day. We hope that we have succeeded by giving you the full details and information. To follow all our news, you can subscribe to the alerts system or to one of our different systems to provide you with all that is new.