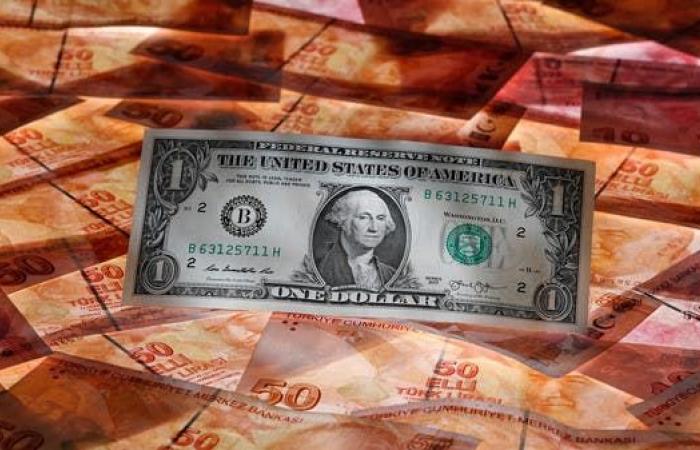 Last week, the Turkish lira recorded its worst weekly performance in nearly 21 years, mimicking all the easy gains it made, amid panic among investors who are overwhelming the central interest rate in Turkey despite the economic difficulties the country faces in the midst of the severe coronavirus and geopolitical epidemic. . Economy. Turkish language.

The decline recorded last week is the ninth weekly decline in the Turkish currency, approaching an important psychological barrier at 8 pounds for the dollar, confirming the market’s fear that the central bank’s move in Turkey will not face the difficulties facing the economy, which amount to about $ 700 billion. Bloomberg Agency.

“The bank has not met the intention yet … Years of policy mistakes have led to massive reserves losses and pressure on the currency … the decision by the bank also proves that the authorities are not ready to cut,” Aberdeen, a London-based fixed income analyst, told the agency. Credit rates are essential to bring the market back into balance. “

A study conducted by Barclays Bank said that the Turkish central bank should have adopted a policy of raising interest rates as the only option to stop the depletion of the currency, which may not remain sufficient to support the pound, but it is a step that must be taken immediately.

On October 22, the Turkish central bank approved interest rates after raising them at the last meeting by 150 basis points to 11.5%, a move that failed to pull the pound from a sharp decline against the dollar as it approached levels of 8 pounds to the dollar, a non-record high. registered. Before.

The pound’s decline reminds us of what happened in 1999, which is one of the worst years ever for the Turkish economy, when the government disintegrated and early elections were held, in addition to two earthquakes that killed thousands of Turks, which led to a severe economic crisis. The economy moved in 2001.

The low interest rates caused foreign investors’ reluctance to leave Turkish assets and increased pressure on the Turkish currency at a time when the country faces the risk of ending the US sanctions on it due to its political positions and conflicts in the Middle East, issues that have drained foreign exchange reserves by the Central Bank. .

Foreign investors have sold about $ 13.5 billion in Turkish assets on the stock exchange and bonds this year, the worst wave of foreign exit from Turkish investment vessels since at least 2005, while there is no sign of a halt in sight.

These were the details of the news The worst week for the Turkish currency since 1999 … what... for this day. We hope that we have succeeded by giving you the full details and information. To follow all our news, you can subscribe to the alerts system or to one of our different systems to provide you with all that is new.