On the way to the largest IPO in history: the fintech... 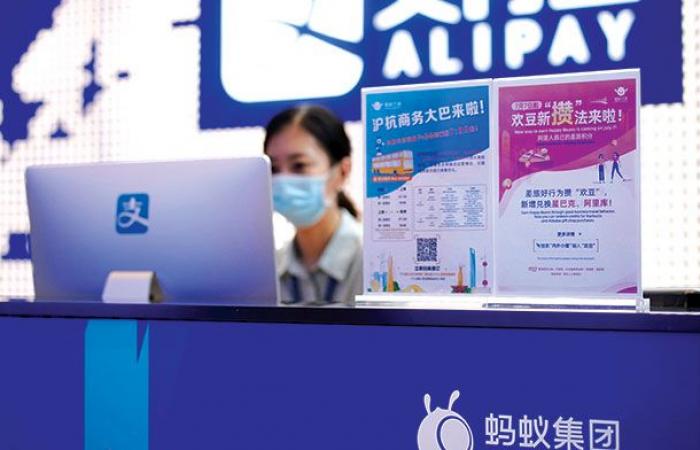 In 2016, Jack Ma, the founder of Alibaba, invented a new term. Instead of classifying the company he founded, Annette Financial, as a fintech company, he argued that it should be described as a tech-pin company, a name that gives priority to the technological component over the financial side. The change in the company’s definition is also reflected in the decision made this year, to change its name to Annette Group.

ChangesThese fences are not a semantic matter, but express the great upheaval that Annette Group’s business model has undergone in recent years. For years Annette, the operator of Alifay – the leading financial app in China – has run like a banking institution for everything, managing the finances of the users of the app itself.

But as Annette’s popularity grew, and capital under her hands intensified, Chinese financial regulators began to fear more. To reduce the risk of a huge financial collapse, they demanded that Mant meet capital adequacy requirements similar to those of regular banks. This situation obliged Annette to update her course of action, a change that ultimately actually played in her favor in a big way.

This week, Annette Group submitted an updated prospectus ahead of its planned dual offering, at the Technology Star Stock Exchange in Shanghai and the Hong Kong Stock Exchange, which may take place in the coming weeks. The issue of Annette Group is expected to be the largest in history and according to forecasts, the Chinese company will raise $ 35 billion in it. The largest offering to date has been from Saudi oil company Aramco, which raised $ 25.6 billion last year. Annette announced that Chinese investors, including Alibaba itself, had pledged in advance to purchase a third of the shares put up for sale.

Founder Jack Ma already announced last Friday that Annette Group’s IPO will be the largest in history. “This is the first time such pricing – the largest in history – has been set outside of New York,” Ma said. According to Reuters, Annette is expected to raise up to $ 17.3 billion on the Shanghai Stock Exchange and another similar amount on the Hong Kong Stock Exchange.

We will change the banks

Annette Group was born in late 2003 as an arm within retail giant Alibaba. It was initially used as a money transfer service between sellers and buyers on Alibaba’s e-commerce site, which was then taking its first steps. The company later began allowing payments through a mobile wallet at physical businesses. Annette is still the largest payment company in China, and in the 12 months leading up to June this year it handled $ 17 trillion in payments, 24 times the amount that goes through the PayPal service per year.

Over time, Annette has become more sophisticated, allowing users to invest money in revenue streams or get credit within the app. Jack Ma, who built Alibaba around the ideology of helping small businesses, even sought to make credit accessible to those businesses that China’s regular banking system had systematically ignored. “If the banks do not change, we will change the banks,” he said in 2008. Everything worked fine, until the regulator intervened.

Due to the stringent regulatory requirements, today 98% of the loans taken by users through the Alifai app are recorded in the books of banks and third parties. The app has become a kind of supermarket of financial products, or rather AliExpress of finance, where users can choose programs that other entities fund and take the risk on. “Our approach is not to take credit risks ourselves,” Annette Group writes in the IPO prospectus it submitted. The company has ostensibly only become an intermediary in the process, but it is certainly not a passive intermediary.

Annette’s business model, which she outlines in a prospectus, places it between the customer applying for a loan and the bank that will provide the same loan. Jack Ma originally wanted to replace the banks, but following the regulation he was forced to cooperate with them, only in this partnership Annette still maintains the upper hand. Although Annette parted ways with the financial risk involved in providing loans, it reserved the right to determine the details of the financial products marketed on its platform, including their rules and conditions.

In the area of ​​credit to private customers, for example, Annette has designed the two best-selling loan programs in China, Hava Bay and Jia Bay, which 500 million Chinese have taken out in the last year alone. Hava Bey is a loan in small amounts starting from 20 yuan (10 shekels), which can be repaid within 30 days without interest. Jia Bay is a loan for larger expenses, starting at 1,000 yuan (NIS 500), which must be repaid within 3-12 months in interest-bearing payments.

Banks had two good reasons for agreeing to accept Annette’s dictates. The first – with 711 million active monthly users, the Alipay app is the most important channel for marketing financial products to the public, especially for young Chinese who are used to doing everything at the push of a button.

The second reason that has made banks Annette’s covert partners is its superior technology. One of the problems in China is the lack of an established credit rating agency, which will allow banks to decide whether or not to give a loan to customers. A large proportion of Chinese customers have never had a credit card, and their documented financial history is very limited, so banks do not have much on which to make decisions on the subject.

Annette has managed to get around this hurdle, and with the help of sophisticated use of artificial intelligence and big data has created an innovative and fairly accurate credit rating system. Based on the analysis of the billions of loans it has given to date, the company is able to predict the customer’s repayment ability using parameters such as the pattern of his expenses, assets and personal details. Annette is actually the one who calculates the customer’s credit risks and passes the recommendation to the banks, which have become a kind of stupid pipeline for distributing loans, with little control over the process.

It all happens very quickly. Annette’s model for granting credit is called “310”, because according to the company it takes 3 minutes to fill out an application for a loan in the app, the loan is approved in just one second, and everything is done automatically, with 0 human involvement.

It is also very efficient, and despite its huge volume of activity, Annette employs only 16,000 workers, 70% of whom are technologists – a much smaller number than any financial institution of similar volume. Although the process is completely automated, Annette still maintains a low percentage of bad loans, with only 1.56% of the credit given through it recording a backlog of over 60 days in repayment in 2019.

Instead of earning from interest rates, Annette’s revenues are built on digital service fees that it charges the partner banks and financial institutions for each transaction. This model works not bad, and Annette posted a net profit of $ 2.6 billion last year. Annette’s value in the IPO is expected to reach $ 250 billion, higher than the value of most US banks, for comparison. Not bad for someone who only mediates, and does not manage money herself.

*The article has been translated based on the content of Source link by https://www.globes.co.il/news/article.aspx?did=1001346734
. If there is any problem regarding the content, copyright, please leave a report below the article. We will try to process as quickly as possible to protect the rights of the author. Thank you very much!

These were the details of the news On the way to the largest IPO in history: the fintech... for this day. We hope that we have succeeded by giving you the full details and information. To follow all our news, you can subscribe to the alerts system or to one of our different systems to provide you with all that is new.