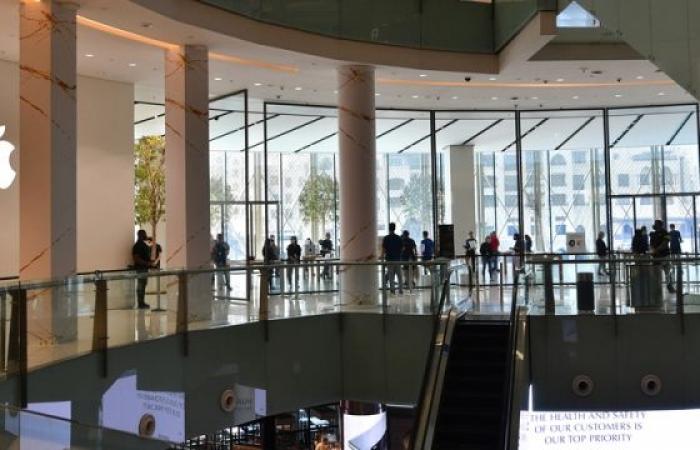 Yesterday, the US company, Apple, launched two iPhone 12 and iPhone 12 Pro phones supported by the fifth generation network, amid precautionary measures to confront the Corona virus, which included strict application of social distancing standards and checking the wearing of masks for consumers. In addition to preventing media representatives from entering the outlets or filming inside them.

Emirates Today, in a field tour to it during the company’s launch of the two phones through its store in the “Dubai Mall” center, during the early hours yesterday, monitored moderate turnout indicators for residents and citizens, while consumers were prevented from entering the store, except for those who made advance reservations only, and in numbers Specific alternately, while consumers reported that they completed the reservation process for the purchase a week ago, and some indicated that they preferred to buy an iPhone Pro to take advantage of the triple-camera imaging capabilities, and to buy products for the new iPad Air tablet.

In detail, consumer Muhammad Hussein said that he preferred to buy the new iPhone 12 Pro to take advantage of the technologies supported by it in photography, with the availability of three rear cameras compared to two cameras in the iPhone 12, and that he had reserved two phones for him and one of his family members of color. Blue and a memory capacity of 128 GB.

The consumer, Muhammad Shafraz, added that he bought two iPhone 12 Pro phones in black color with 256 GB memory, and that he preferred that phone because of the availability of three rear cameras in it compared to the iPhone 12, pointing out that he was waiting for an iPhone. Mini at its launch, expected within the next month, to buy it for his son with its availability at an affordable price and its support for the fifth generation.

The consumer, Askar Muhammad, explained that he booked two phones a week ago, one of the “iPhone 12” and the other of the “iPhone 12 Pro”, in addition to the new tablet “iPad Pro”, pointing out that despite the strict measures and precautionary measures, he did not wait for periods. This is due to the repercussions of the Corona pandemic, which made some consumers not prefer to come to buy for fear of crowding, and some dealers used to come from neighboring countries to get the device as soon as it was launched in the company’s official regional stores in Country. Consumer Hassan Abdullah added that he tried to buy an “iPhone 12 Pro” phone from the store, but the company’s store employees told him that only pre-booking customers would be allowed to enter the store.

The company “Apple” had announced the availability of pre-booking on the “iPhone 12” and “iPhone 12 Pro”, starting from October 16th.

Among the most prominent specifications of the two new phones are support for fifth generation technologies. They are also equipped with an A14 Epponic processor, with a 6.1-inch screen.

The iPhone 12 comes with two 12-megapixel rear cameras each. Compared to the iPhone 11, the phone is 11% thinner and 16% lighter, while the iPhone 12 Pro is available with three rear cameras with capabilities. Superior shooting in various conditions.

These were the details of the news “Apple” is launching in the UAE “iPhone 12” and “12 Pro”... for this day. We hope that we have succeeded by giving you the full details and information. To follow all our news, you can subscribe to the alerts system or to one of our different systems to provide you with all that is new.