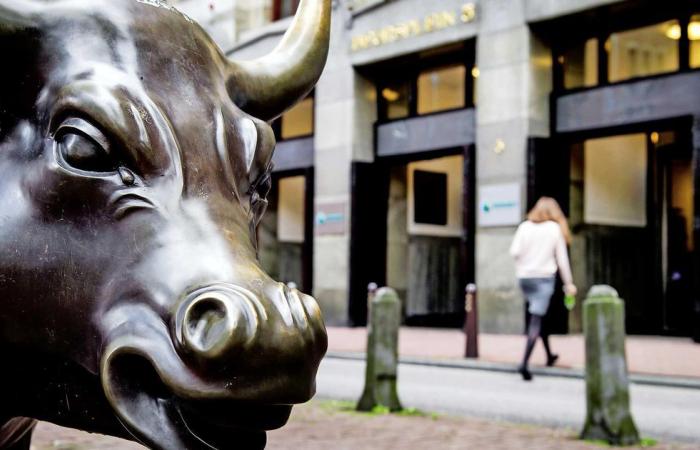 The course signs elsewhere in Europe were even more red. Paris and Frankfurt lost up to 1.5%.

Secretary of the Treasury Steven Mnuchin and Nancy Pelosi, the Democratic chair of the US House of Representatives, missed Tuesday’s deadline for drafting a new bailout package for victims of the US corona crisis. But they did come closer to an agreement and are expected to continue speaking today.

According to Teeuwe Mevissen, economist at Rabobank, there are three parties in the negotiations that must jointly reach a deal about new corona support. “In addition to the Democrats and Republicans, the White House also has an important role. It’s up to Munchin to get everyone to agree on the scope and terms of the bailout package, with the White House already pushing forward a bit to the Democrats. ”

The fast approaching US presidential elections in early November also continue to dominate sentiment, Mevissen says. He points out that Trump in the polls in the important swingstate Florida has cut its backlog. “It remains to be seen whether the scenario that Biden becomes president and gets a majority in Congress will come true. It is almost certain that one of the parties wants a fix given the large number of votes by post. ”

Furthermore, the ongoing Brexit negotiations still require attention. According to Mevissen, Europe has probably been whispered by Chancellor Merkel to reach out to the British. “In our baseline scenario, we still assume that a deal will be reached before the end-December deadline.”

Dive into the AEX Galapagos 6.8% down. Goldman Sachs provided a sales recommendation for the biotechnology group. The investment bank also sharply lowered its target price for the Galapagos share from € 108 to € 87.

Unibail was written down 5.1%. Last week, a group of shareholders opposed a share issue of the retail property fund, but according to chairman of the board Colin Dyer, their alternative plan is ‘unfeasible’.

Philips lost 2.1%. At the beginning of this week, investors were still satisfied with the quarterly results of the healthcare technology group. In front of KPN investors had 2.1% less left.

Unilever that opens the books tomorrow, 1.4% slipped. The other important fund RD Shell had to give up 1.8% because of the falling oil prices.

AkzoNobel fell 0.8%. The paint group posted a clearly higher profit last quarter, but apparently investors had expected a little more. The paint manufacturer mainly benefited from cost savings in the past quarter.

Randstad shot 6,2% up. The broadcaster showed further recovery in the third quarter, after the group was previously hit hard by the corona crisis. Randstad posted significantly lower results in the period than a year ago. But the numbers were generally better than analysts expected. According to Van de Groep, it remains to be seen how Randstad will perform in the fourth quarter with the arrival of the second corona wave, which could hamper demand in the temporary employment market. “They may also benefit from permanent staff not being able to work because of the quarataine.”

Insurer Aegon made a profit of 0.2%. Adyen (+ 0.1%) reported having found a successor for technology director and co-founder Arnout Schuijff. His role in the payment processor will be taken over by Alexander Matthey starting the new year. He has been working for Adyen for over five years.

In de AMX was Pharming in demand with a gain of 1.9%. The biotech company announced that it had received orphan drug designation from the European Commission for its drug leniolisib. This is a drug for the treatment of APDS, a rare and serious disease of the immune system.

After a depressed start, Fugro saw the share price pick up another 3.8%. With that, Tuesday’s cheer got a nice follow-up, partly because of the good course of events. PostNL was also popular with a 3.1% higher rate.

Logistics real estate fund WDP (-0,5%) tightened up the earnings forecast for the entire year and is now expecting earnings per share of € 1. Previously, a bandwidth of € 0.95 to € 1.00 was assumed.

Smallcapfonds Nedap (+ 2.4%) already released a quarterly update after the closing bell on Tuesday. The technology company saw sales in the third quarter fall by 5 percent compared to a year ago.

Would you like to receive the DFT Newsletter automatically by email every morning from now on? Then you can sign up here for free.

These were the details of the news AEX drops considerably with hangover Galapagos; leading role Randstad |... for this day. We hope that we have succeeded by giving you the full details and information. To follow all our news, you can subscribe to the alerts system or to one of our different systems to provide you with all that is new.