LIVE: One theater after another closes its doors | 1Limburg 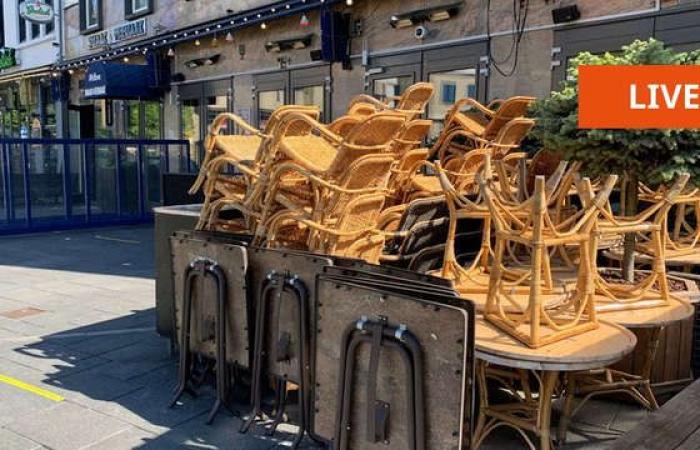 This is the main corona news of Wednesday, October 14:

17:36 – Handymen now have to wear masks at Hornbach
In the Hornbach DIY stores and garden centers, customers are obliged to wear a mouth mask from Monday. The retail chain is taking this measure in advance of the national introduction of the obligation. Visitors who forget their masks will receive one for free at the entrance. Employees are also expected to wear a mask.

17:14 – Ciro lung center limited visits after corona infections
The Ciro Lung Center in Horn is adjusting the visitors’ scheme after nine patients tested positive for the corona virus last week. An infected patient had serious complaints and was taken to hospital.

16:40 – Theater Maaspoort and pop venue Grenswerk in Venlo close
One theater after another will close for four weeks on Wednesdays. Although up to 30 people are allowed per venue, the theaters and music venues do not see the point. Following the example of the M theater in Maastricht, the theater Venray and the Muntheater in Weert, theater De Maaspoort and pop venue Grenswerk in Venlo will also close their doors for the next four weeks. Only Parkstad Limburg Theaters, with locations in Heerlen and Kerkrade, wants to try the ultimate in continuing with performances.

16:25 – Munttheater Weert closes doors until November 8
The Munt Theater in Weert will be closed. The management will let you know on the website of the theater on Wednesday. “In the light of the measures to keep social contact to a minimum, we have decided to cancel all performances and events until November 8, 2020. Performances and events will be rescheduled or canceled.”

Anyone who has bought tickets for performances that have been canceled will receive an email from the theater about the further progress of the performances.

15:55 – The number of premature births decreases in corona time
The number of premature births in the Netherlands has fallen by about 20 percent after the first corona measures on March 9, Rotterdam Erasmus MC announced after research. The decline may be related to the cabinet’s announcement at the time that people should wash their hands often and thoroughly and stop shaking hands. “By better hand hygiene and no more shaking hands, less bacteria and viruses are exchanged, so that pregnant women were also less exposed to pathogens,” says Irwin Reiss of Erasmus MC Sophia Children’s Hospital. The scientists examined data from more than 1.5 million babies born between October 2010 and July 2020.

13:45 hours – Cabinet will actively discourage travel to ‘orange areas’
The cabinet will take extra measures to discourage people from traveling to areas where an orange travel advice applies. Minister Cora van Nieuwenhuizen (Infrastructure) writes this in a letter to the Lower House.

For example, on the website ‘nederlandwereldwereld.nl’, where travel advice can be found, the message ‘do not book holiday trips to areas with orange travel advice’. The site belongs to the Ministry of Foreign Affairs. Advertising space is also purchased on travel comparison sites, where a reference is made to travel advice.

For motorists, the minister will use social media and navigation apps to inform them of the measures. It also mentions the possible consequences if someone does go, such as a quarantine.

The railways will no longer promote international train journeys to, for example, London or Vienna, State Secretary Stientje van Veldhoven has agreed with NS International. Furthermore, “various members of the cabinet” will enter into discussions with various parties from the travel and transport industry to make agreements about not promoting travel to areas with an orange travel advice. Furthermore, insurers are asked to bring information about this to the attention of customers.

1:24 pm – Miljoenenlijn closed
Due to the new corona measures, all steam train rides over the Miljoenenlijn will be canceled. “At the moment, with the rapidly increasing contamination figures, we do not think it is responsible to keep our doors open”, according to the Miljoenenlijn site. People who have already bought a ticket will be informed. In any case, the tickets remain valid.

1:07 pm – New measures less well observed
The Dutch have recently been less compliant with the applicable corona measures than previously during the outbreak. This is the conclusion of RIVM CEO Jaap van Dissel, who will update the House of Representatives on Wednesday about the developments surrounding the corona virus.

The possible effects of the measures announced at the end of September are “not yet visible,” Van Dissel said, but he added that there are “major doubts” about the effectiveness of those steps. The first positive signs should be visible this week. If it does come, the effect will probably be less than earlier this year, says Van Dissel. “We can give ourselves a gift” by sticking to the measures, he told the House.

11:25 am – Ban on drinks and soft drugs via emergency ordinance
The ban on drinking and smoking cannabis in the street after 10 PM is regulated for the coming weeks through local emergency ordinances. The ministry has given instructions to the security regions, which will then implement the ban. The ban goes into effect on Wednesday evening at 10 p.m.

2:10 pm – Venray Theater closes doors
The theater in Venray no longer sees opportunities to hold performances due to the new measures. That is why the theater will be closed until November 11.

30 people will require adjustments and a reduction in the range of programs, says the theater. Not all artists can play for 30 guests. In order to guarantee a safe theater visit for the public, the theater must also deploy much more staff than is usual.

11:04 am – Partial lockdown: ‘Drama for culture sector’
All theaters and music venues may not receive more than 30 people per room. Exceptions are no longer possible. “That is a drama for the cultural sector”, say Rocco Malherbe, director of operations of Parkstad Limburg Theaters and general director Jean Boelen of Theater aan het Vrijthof.

Parkstad Limburg Theaters, with locations in Heerlen and Kerkrade, wants to try the ultimate in continuing with performances. The M-Theater will close for four weeks for the time being and is investigating the possibilities of keeping the theater open even after the end of December.

10:33 – Mayor Maasmechelen: stay away from our catering industry
The mayor of Maasmechelen hopes that our cabinet itself will prevent Dutch people from coming to the Belgian catering industry. “If you want your own rules to succeed, you have to do that,” he told VRT NWS. “While it was our responsibility a few months ago to ensure that Belgians do not go to the Netherlands, it may now be up to the Netherlands to monitor this.

There is a danger that the Dutch will risk the crossing. And that would mean greater pressure on the boiler. It is mainly up to the Netherlands to keep people at home, “says Terwingen.” Otherwise they risk that the mixing that they so much want to avoid in a cafe in Maastricht will now happen in a cafe in Maasmechelen. “

Armin Laschet is hopeful that the pandemic can still be contained. But he did not rule out the lockdown around the end of the year. “No, no one can promise that. But we can do everything that it will not get that far”, he told TV channel ntv.

9:05 am – Blow to economy and business support needed
The Limburg Employers Association LWV advocates a so-called time-out and stop scheme. This allows entrepreneurs to stop temporarily without running the risk of going bankrupt in the meantime. In this way you prevent staff from having to be fired. As a result, companies could immediately get back to work when scaling down the measures. That said LWV director, Huub Narinx on Wednesday morning in the L1 News Show. Many companies need extra government support because of the new corona measures, according to Narinx.

“Everyone is still shaking a bit. It was coming. The number of infections increased so quickly that measures had to be taken. We did not do well together. Now we have to put our shoulders to the wheel,” stick to the measures together and see what is possible. We have to take into account a longer period of economic contraction. The blow to the economy will be more severe than we thought when we got over the first wave relatively quickly, “said Narinx .

8:56 am – Chamber talks about coronavirus developments
On Wednesday, the Lower House will debate with Prime Minister Mark Rutte and Minister Hugo de Jonge about the developments surrounding the corona virus. The number of infections has been increasing rapidly in recent weeks. Hospitals now have to scale down regular care. Although the opposition parties seem to show understanding for the measures, there are plenty of critical comments about the cabinet measures. “Today’s measures are necessary,” emphasizes GroenLinks leader Jesse Klaver. “But how sour it feels that we have arrived here.”

“The cabinet has bumped into its own indecision at full speed,” said SP party leader Lilian Marijnissen. According to PVV leader Geert Wilders, the Netherlands is paying the price for “the failure” of Prime Minister Mark Rutte and Minister of Health Hugo de Jonge. “They have made an incredible mess of it,” he says. “They ignore aerogenic contamination.”

8:52 a.m. – Wednesday, first day of tightened corona cabinet measures
Most of the measures that Prime Minister Mark Rutte announced on Tuesday evening in the fight against the corona virus will go into effect on Wednesday. These are intended to apply for at least four weeks. Rutte announced “severe” measures on Tuesday evening. “We will only stop when we really can.” A balance will be drawn up in two weeks.

*The article has been translated based on the content of Source link by https://www.1limburg.nl/live-ene-na-het-andere-theater-sluit-de-deuren
. If there is any problem regarding the content, copyright, please leave a report below the article. We will try to process as quickly as possible to protect the rights of the author. Thank you very much!

These were the details of the news LIVE: One theater after another closes its doors | 1Limburg for this day. We hope that we have succeeded by giving you the full details and information. To follow all our news, you can subscribe to the alerts system or to one of our different systems to provide you with all that is new.