In numbers … the exodus of investments compounds the crises of... 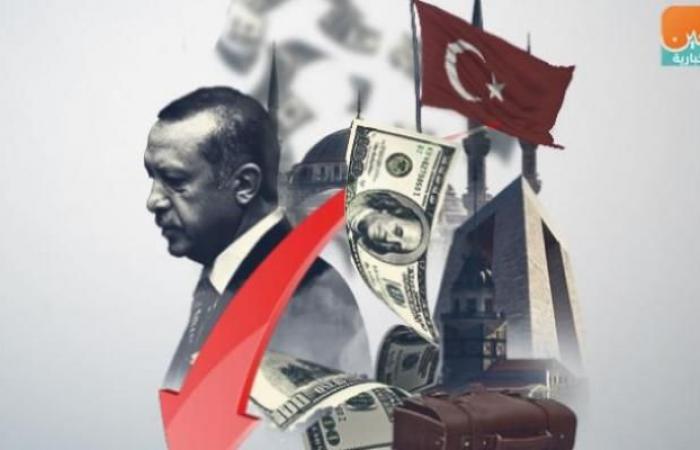 The Turkish current transactions deficit worsened during last August, amid low export revenues and economic problems that led to a deterioration in monetary and financial indicators and the displacement of investments.

And the local currency crisis – the lira – in addition to the exodus of foreign exchange and investment also pushed the deficit to rise again, indicating a severe risk, according to official data.

The Turkish central bank said, on Monday, that the current transaction account recorded a deficit of $ 4.631 billion, compared to a surplus of 3.314 billion in the same month of 2019.

With the rise in the current account deficit, the total renewed deficit of Turkey increased during the past 12 months to 23,203 million dollars.

The shift to the deficit on an annual basis is mainly attributable to net outflow of $ 5.347 billion, while net inflow decreased to $ 1.179 billion.

With regard to bond issues in the international capital markets, banks achieved net borrowing of $ 286 million, while other sectors made net payments of $ 17 million.

Turkey is suffering from a grinding economic crisis that is increasing day after day, amid the failure of the Erdogan regime to find solutions to it, and it has deepened with the precautionary measures announced by Ankara to prevent the spread of Corona.

A few days ago, the Turkish central bank raised the interest rates in its lira swap operations to 11.75 percent from 10.25 percent, continuing additional tightening steps in the face of the weakening of the lira after it surprisingly increased the main interest rate last month.

And after it raised interest in its swap operations, the pound rose to about 7.90 against the US dollar.

The Turkish currency has lost 25 percent of its value this year, mainly due to concerns about the dissipation of the central bank’s foreign exchange reserves and costly interventions in the currency market. But geopolitical concerns are now a major factor.

The value of Turkey’s budget deficit (the difference between current revenues and expenditures) was about 139.1 billion liras (19 billion US dollars) during the first seven months of this year 2020, which is the highest deficit value in history in local currency.

The balance of current transactions records the net revenues or payments of the state in several transactions, including the export of goods and services and investment income.

These were the details of the news In numbers … the exodus of investments compounds the crises of... for this day. We hope that we have succeeded by giving you the full details and information. To follow all our news, you can subscribe to the alerts system or to one of our different systems to provide you with all that is new.