Beware … someone is spying on your phone 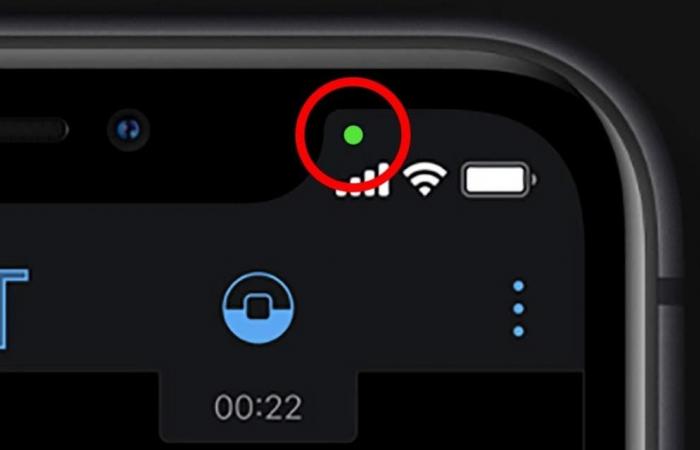 The American company “Apple” was able to move for the first time towards uncovering the spying operations carried out on its iPhone users. Users can now know if they are a victim of an espionage operation or not, and whether someone is eavesdropping on them and listening to what they say and recording what is happening. By their cameras phones or not.

There is a state of panic in the whole world from the suspicious piracy applications that some users get involved by downloading them to their mobile phones, and then making them victims of espionage and eavesdropping operations that reach to operate the cameras on their phones in order to see and hear what they are doing.

A report published by the British newspaper “The Sun” and seen by “Al Arabiya Net” revealed that the latest update put forward by “Apple” for “iPhone” phones has added a new “warning point” that alerts the user whenever the microphone or camera is activated.

According to the report, “This means that if any application registers you surreptitiously, you will know that immediately,” noting that “this is part of the new iPhone update, as in the new version of the new operating system called (iOS 14), a green dot will appear in “The upper right corner of the screen is when the cameras are activated. If the microphone is activated, the color will be orange.”

By swiping to your Control Center, you will be able to see details about the app that is using the microphone, depending on what information is available on the updated operating system.

The “Sun” asserts in its report that “in the event of suspicion that something exists, the user must verify the application’s permissions in the settings, as the user can deny access to certain applications to the microphone or camera, and any application that the user suspects or causes him concern can be deleted.” .

The American company Apple said that “privacy is a basic human right and is the essence of everything we do.”

She added: “That is why, with the operating system (iOS 14), the user is given more control over the data they share and more transparency about how they are used.”

“An indicator appears at the top of your screen when an application uses the microphone or the camera,” she said. In the Control Center, you can see if an application has used them recently.

“Apple” says that this change is not the only one to privacy that has been added to the (iOS 14) system, where, for example, you can now share an approximate location with an application instead of sharing your exact details, and this means that the application can display you Nearby stores – for example – without knowing exactly where you live.

Concerns prevail among mobile phone users around the world about privacy and whether some applications have the power to operate the camera or microphone or view the contents of the phone, while many users claim that the “Facebook” application was displaying ads related to what they were speaking out loudly. Which raises widespread suspicions about privacy.

These were the details of the news Beware … someone is spying on your phone for this day. We hope that we have succeeded by giving you the full details and information. To follow all our news, you can subscribe to the alerts system or to one of our different systems to provide you with all that is new.