Stocks are looking for a path to await the start of... 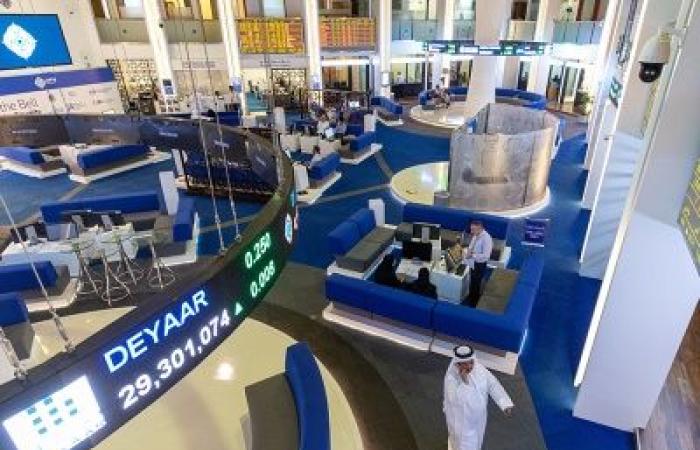 Uncertainty dominated the performance of local stocks in weekly trading, awaiting a new buy signal with the approach of the quarterly results for companies, as the moves generally remained in the occasional framework, during which the purchase of a very limited number of shares receded.

The Abu Dhabi market index succeeded in closing at a weekly increase of 0.46%, supported by the gains of «Etisalat» and «First Abu Dhabi» despite the fluctuation of its performance from one session to another, while the declines of the shares of «real estate» and «Dubai Islamic» caused the Dubai index to fall by 2.3%. %.

Among the few stocks targeted for purchase was the share of “Aldar”, which rose in a week by only 0.5%, and foreign (non-Arab) ownership in the company rose to 7.34 million shares.

Agthia, in turn, witnessed a positive move, and led the market’s gains in a week by 21.85%, closing at 4.35 dirhams, noting that the liquidity it attracted amounted to 17.6 million dirhams only through trading 4.4 million shares.

The Dubai Financial Market index fell by 2.3% at the level of 2,214.32 points per week, affected by the descent of the sectoral indices of banking, real estate, investment, insurance, transport, goods and services stocks.

The Abu Dhabi Securities Market index recorded a weekly increase of 0.46% to the level of 4512.5 points, with the increase in the sectoral indices of investment, real estate, telecommunications and commodities stocks.

The telecom sector rose 1.68%, with the main supporter of the market index rising by the same.

Regarding trades by nationalities during a week in the Abu Dhabi market, Gulf investors and citizens tended to buy with a net investment of 61.87 million dirhams as a purchase, of which about 21 million dirhams were the sum of Gulf buyers and 40.88 million dirhams from citizens’ purchases.

Al-Khaleej’s weekly analysis of market data showed that non-Arab foreigners ’purchase focused on“ Aldar ”shares in the first place, as their ownership increased to 7.34 million shares, and came second in terms of foreign purchases by“ Ann Digital Services ”, followed by“ First Abu Dhabi ”and“ Emaar Development ”. ».

In contrast, their sales focused on the shares of “Dana Gas”, “Waha Capital”, “Emaar Properties” and “DXB”.

These were the details of the news Stocks are looking for a path to await the start of... for this day. We hope that we have succeeded by giving you the full details and information. To follow all our news, you can subscribe to the alerts system or to one of our different systems to provide you with all that is new.