New leaks reveal the color and price of iPhone 12 phones 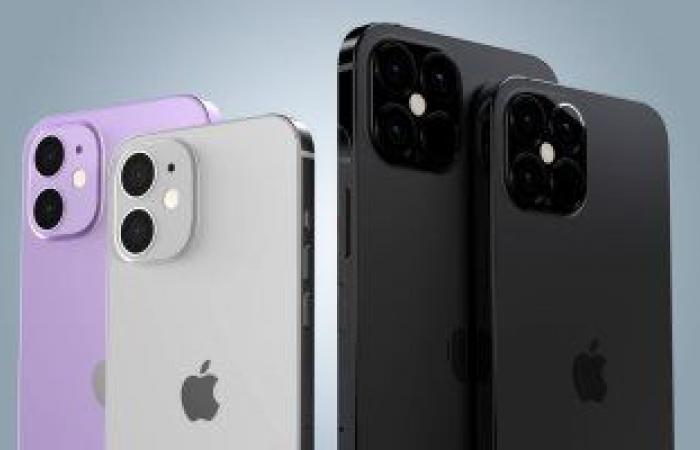 Apple is expected to disclose IPhone 12 phones Within a week, as the latest iPhones arrive with a design with fairly square edges, there are already a lot of rumors pointing to an entirely new design with square edges, and all indications are that this is the year the iPhone gets 5G, which should prepare you. For faster data speeds, once the networks can reliably connect them.

According to the “verge” site, there is still a lot of mystery surrounding the following iPhones, and it has not been completely leaked, but there is enough to assemble a good picture of what Apple is planning, and perhaps the most widespread rumor is that the American company will launch four new iPhones. This year, with two new screen sizes, it seems that all reliable sources of Apple rumors agree that instead of announcing three new models of the iPhone, as Apple did in 2017, 2018 and 2019, the company will reveal four:

• A new 5.4-inch model, which will have a smaller screen than the 5.8-inch iPhone 11 Pro, and is supposed to be a completely smaller phone.

• 6.1-inch model the same size as the iPhone 11 – with similar specifications to its 5.4-inch brother.

The credible rumors came from Apple analyst Ming-Chi Kuo, who has reliably predicted the sizes and features of the new iPhones for several years now, but the Wall Street Journal also confirmed these screen sizes in April, and as of last week, Bloomberg reported them as fact as well.

The latest leaks have revealed a hint about the names of the iPhone 12 group, as one of the two months leakers on Twitter revealed what they claim are names for new iPhones, according to the reliable leak, the new iPhones will be called:

Perhaps this is one of the first times we heard of the iPhone 12 Mini being proposed as one of the names, although this fits with other previous rumors, while famous Apple analyst Ming-Chi Kuo indicates that the smallest of the four iPhones will have a screen size of only 5.4 inches. .

Apple may reveal the new iPhone 12 series of phones at its own event on October 13, according to a report issued by the US site AppleInsider, where the report adds that pre-orders for new iPhones can start from October 16, and the report cites information from the advice. It was sent by someone who identified himself as working for a telecom company in the Netherlands. ”It is expected that all new iPhones will have 5G capacity.

While the Tmall store in China confirmed that Apple is preparing to start pre-booking the iPhone 12 series on October 16, and details of the prices of upcoming releases have been monitored in recent leaks on the Internet, according to the Chinese site gizchina.

The latest leaks also revealed the colors presented by Apple this year for the Apple iPhone 12 Pro, where this version is launched in red and dark blue colors, among other colors, according to a report issued by GizChina, quoting analysts, and there has been no red iPhone phone since The red version of the iPhone X product, otherwise, there were limited versions of the iPhone XR, 11 and SE 2020.

Some previous leaks also indicated Apple’s plans to launch the navy blue for the iPhone 12 Pro, and the phone was also spotted in three-dimensional images in blue, as one analyst indicated in a recently published report that Apple will provide the navy color for its Series 6 smart watch to match the company’s products Available colors.

These were the details of the news New leaks reveal the color and price of iPhone 12 phones for this day. We hope that we have succeeded by giving you the full details and information. To follow all our news, you can subscribe to the alerts system or to one of our different systems to provide you with all that is new.