36% of workers’ compensation has flown 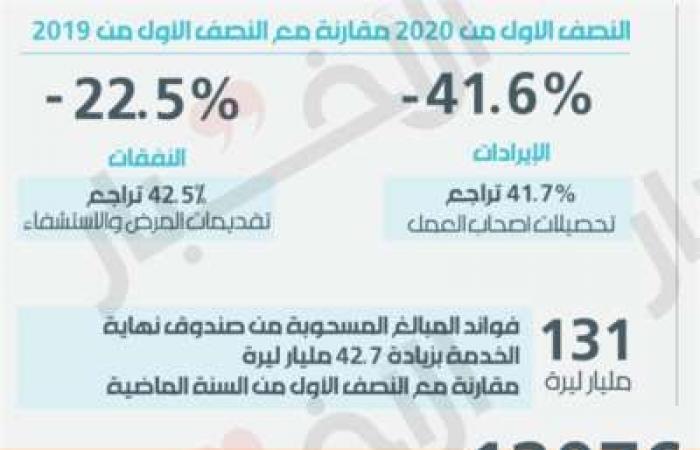 Financial management in the National Social Security Fund may be one of the worst and most backward. It is still working on a cash basis to calculate the benefits the fund pays and the revenues it gets. The fund may receive sums for past years and record them as if they were received today, or it may pay in advance for future months and record them as if they happened today. More than that, it was found in 2018 that financial advances that are withdrawn from end-of-service funds to make hospital advances on unliquidated bills, are not counted within the deficit of the Sickness and Maternity Insurance Branch. These fraudulent accounting practices to hide the actual deficit since the introduction of the advances system in violation of the guarantee law in 2011, was discovered by the Finance Committee at the end of 2018, requesting correction. Suddenly, the correction came in the semi-annual financial report for the year 2020. The report showed that the total deficit in sickness and maternity insurance amounted to 4273 billion pounds, of which 1846 billion advances for hospitals, and 2427 billion liras is an accumulated deficit in the sickness and maternity insurance branch resulting from the difference between expenditures, revenues and benefits of withdrawals From the end of service branch.

In practice, the deficit is all unlawful withdrawals from the end of service branch. Withdrawals now represent 36.5% of all available funds in this branch, meaning that in practice they are almost irreplaceable losses. This is in addition to a greater loss incurred by the end-of-service compensation branch after the erosion of the value of its money due to the increase in the exchange rate in the parallel market to about 8,000 pounds against the dollar, and the inflation of commodity prices, which consumed more than half of the purchasing power of the average wage in 2020 alone, that is, without calculating the loss Cumulative for inflation. In this sense, the actual value, or purchasing power, of end-of-service funds has shrunk considerably, and it is threatened with further erosion due to the annual increase in health expenditures incurred by the Sickness and Maternity Fund by 7% annually, according to the figures of the Financial Committee in the Board of Directors of Insurance. A high rate, which will lead to an acceleration of the aggravation of disability and more severance payments in the absence of urgent and radical measures. This was at the end of 2018. Since then, no urgent or drastic measures have been taken.
The only emergency measure that was taken about a month ago when the Social Security Department requested from the Banque du Liban to treat the end-of-service compensation paid to those who left work or reached the legal age or the age of 64 as deposits in dollars to be covered on the basis of an exchange rate of 3900 pounds against the dollar (to be converted into The dollar is based on the price of 1520 liras, then it is converted back into the lira at a price of 3900 liras). So far, no final approval has been issued by the Central Council of the Banque du Liban pending the study of the matter, but it has been revealed that covering the entire value of compensation during the year 2020, estimated at more than 1,000 billion pounds, will impose on the Banque du Liban to create additional quantities of cash estimated at 1,500 billion pounds. Annually, or the equivalent of 130 billion pounds per month, that is, the monetary mass in circulation in pounds will increase on average by 10%, compared to the current average monthly increase estimated at 1300 billion pounds.
What will happen is that the Banque du Liban will support compensation by creating cash, just as it seeks to stop subsidizing basic and food commodities and create additional cash with a value of more than 1,100 billion pounds per month, meaning an increase in the amount of cash by 85% on average. Creating cash in this way and with such an acceleration is a big problem, because it will raise the demand for dollars and may contribute to weakening the Syrian Pound even more. If the dollar rises, prices will inflate further, and the Central Bank of Lebanon will have to create more cash. It is a closed cycle that will end in a catastrophe with uncalculated consequences, and will erode more purchasing power for the remaining funds in the end of service fund.
In view of this situation, all that the Social Security Administration proposes is obtaining an emergency advance from the Lebanese state to confront the crisis, increasing the rates of contributions, or forcing the state to pay its debt for the guarantee, given that increasing the amount of money will increase the purchasing power of compensation! All of these solutions come from the same “box” that has prevailed for decades. The issue is about a very late launch of the guarantee to protect workers’ compensation, if not too late. In addition, the high rate of deficit in insurance will force more compensation to be withdrawn in the coming months and to use it to pay hospital advances. It is the rule of capital over work in its clearest form. It is a sovereignty in which the political leaders who claim to represent workers in their custody of the fund, and their sponsorship of the General Labor Union, which has 10 members of the Governing Council of the Guarantee Board. They represented the workers on the day when the debate was raging to raise wages in 2012, while they are not shaken if work compensation is reduced, or used almost completely to pay hospital advances.

These were the details of the news 36% of workers’ compensation has flown for this day. We hope that we have succeeded by giving you the full details and information. To follow all our news, you can subscribe to the alerts system or to one of our different systems to provide you with all that is new.