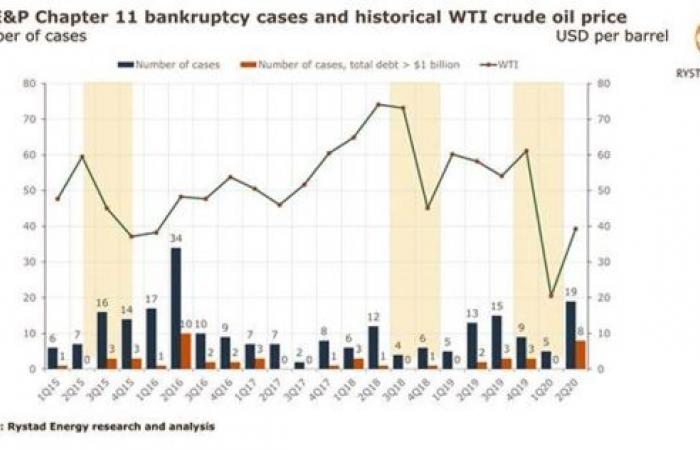 We show you our most important and recent visitors news details US shale Chapter 11 and M&A review: Investment opportunities in low-cost assets in the following article

Hind Al Soulia - Riyadh - OSLO — Several large and small independent US oil and gas producers have filed for bankruptcy this year as their debt burden peaked and hopes of cash flow recovery plunged due to the downturn caused by the COVID-19 pandemic.

At the same time, the market for distressed assets has created opportunities for both institutional investors and supermajors to buy into discounted shale acreage, a Rystad Energy analysis shows.

Our analysis looks at Chapter 11 filings and US shale merger and acquisition activity, while also assessing the debt situation of shale producers.

Chapter 11 filings for US E&P companies jumped to a four-year high in the second quarter of 2020, both in terms of the overall number of cases and in cases filed by companies with at least $1 billion in total debt.

Both in 2Q20 and 2Q16 the number of cases increased as WTI prices dropped below $40, causing operators with higher breakeven prices to struggle to service their debt.

Some of the operators that were on the edge but survived without filing for bankruptcy in 2016 were unable to avoid that fate this time around.

External capital raised by the US E&P industry was at an all-time low of $12.6 billion in 2019, compared to a $37.7 billion annual average seen since 2014, despite the strong December addition of $5.2 billion in debt.

So far this year, the US onshore market has seen 14 M&A deals, with only one of them worth more than $1 billion. By comparison, there were six deals that exceeded $1 billion during the first seven months last year and nine for the whole of 2019, all of which were company mergers.

The largest deal so far this year is Chevron’s announced acquisition of Noble Energy in mid-July for a total market enterprise value of $13 billion when including Noble’s debt. Another interesting deal was announced in May, when National Fuel Gas (NFG) announced plans to acquire Shell’s Appalachian acreage for $541 million.

“Given the uncertainty and the low commodity prices in the US market so far in 2020, this could be an opportune time for asset-specific acquisitions, especially in oil basins where costs are at historical lows.

“As many of the smaller operators are struggling, robust companies are well positioned to negotiate good prices when expanding their portfolios,” Lukash points out.

Despite their high interest and debt numbers for 2020 and 2021, both WPX and ConocoPhillips are among the operators with the lowest net debt-to-resources and net debt-to-EV ratios, which provide more comparable indicators for debt leverage assessment.

Whiting Petroleum and Extraction Oil & Gas have filed for bankruptcy, while Noble Energy has been acquired by Chevron as a company with largely delayed maturities and discounted equity prices at the moment of acquisition.

The LTM debt-to-equity ratio of HighPoint Resources jumped to above 1,000 in 1Q20, up from 73 in 4Q19, as the company’s stock price dropped to below $1, causing its total equity value to plunge from $1 billion to only about $70 million.

Looking at the other peers on the chart, one can speculate which operators could be attractive targets for the supermajors and which could be better merger alternatives in the coming years as the industry attracts more capital.

These were the details of the news US shale Chapter 11 and M&A review: Investment opportunities in low-cost assets for this day. We hope that we have succeeded by giving you the full details and information. To follow all our news, you can subscribe to the alerts system or to one of our different systems to provide you with all that is new.