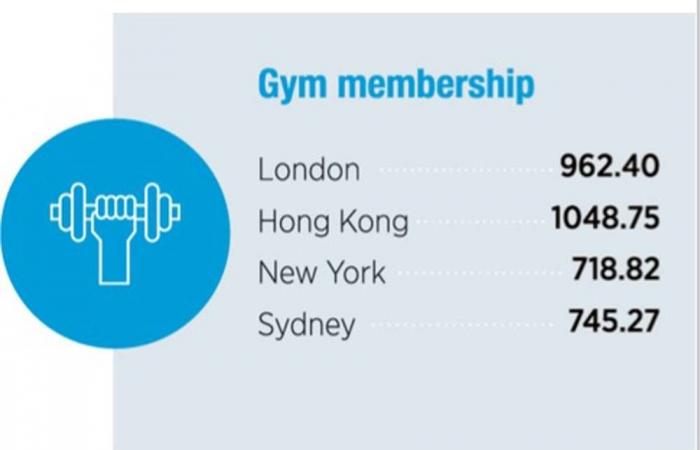 Hind Al Soulia - Riyadh - LONDON — The latest Cost of Living report from global mobility specialist, ECA International reveals UK cities step up the ranking of the most expensive in the world due to the improved strength of the GBP against most currencies.

Reporting the cost of consumer goods and services in locations around the world for over 45 years, ECA captured the data in late February and early March of this year (2020), when many countries were in the midst of battling the first COVID-19 peak, or about to be hit by it.

Central London enters the top 20 in Europe and the top 100 in the world for the first time in four years (94th), overtaking several European cities including Antwerp, Strasbourg, Lyon and Luxembourg City, as well as most major cities listed in Australia.

ECA International’s Cost of Living Survey compares a basket of like-for-like consumer goods and services commonly purchased by international assignees in more than 480 locations worldwide. The survey helps businesses to ensure that their employees’ spending power is maintained when they are sent on international assignments.

Switzerland continues to be one of the most expensive countries in the world, dominating four of the top five most expensive cities. An example of the price disparity, an average medium cappuccino at a café in Zurich costs £4.80, compared to £2.84 in Central London, while a ‘takeaway meal’, such as a burger, fries and a drink, costs £11.36 in Zurich compared to £6.24 in Central London.

Steven Kilfedder, production manager at ECA International, explained: “Heading into the survey the UK was more optimistic over the economy than in the recent past, after a budget promising increased spending and clarity over Brexit which boosted the pound from previous lows.

“At the time the UK seemed well placed to avoid the worst of the pandemic but after 14 weeks of lockdown and facing the biggest recession in modern times and limited progress on Brexit trade negotiations, the pound has returned to previous lows. Although a lot can change, UK cities may well struggle to retain the higher place in the ranking in our next survey.”

Cost of living affected by COVID-19

The economic impact of the COVID-19 pandemic is evident in the Cost of Living ranking for the locations that were first hit with a spread of infection and the uncertainty over the impact. Chinese locations have all dropped in the ranking, as have all locations in South Korea.

Beijing dropped from 15th to 24th in the global ranking, while Seoul dropped nine places and out of the top 10 from 8th to 17th. However, in China, this is also reflective of a longer-term trend of slowing growth and the weakening yuan.

Kilfedder said: “The Chinese economy was hit dramatically by the lockdown measures put in place at the end of 2019. Similarly, as Australia and New Zealand are heavily reliant on trade with China, we can see the rippling effect in the cost of goods and services in these locations. This is also a sign of consumer nervousness, which we are likely to see in other countries around the world in the coming months.”

Kilfedder continued: “In the short term we expect to see inflation drop in various countries around the world as demand weakens and the lower price of oil filters through the economy. Exceptions may be seen in countries where currency falls push up import prices, or budget shortfalls mean subsidies are cut or taxes rise, like in Saudi Arabia which is tripling VAT to 15%.”

Months of protests in Colombia and Chile have made significant impacts on their economies, with weaker currencies causing cities in these countries to drop significantly in the ranking. Santiago in Chile ranks 217th, while Bogota in Colombia ranks a lowly 224th, for example. Hong Kong also dropped slightly in the global ranking from 4th to 6th after months of demonstrations in the city.

“Although Hong Kong remains in the top 10 most expensive cities, this is largely due to being closely tied to the US dollar which is performing well. Hong Kong also avoided a form of crippling lockdown from COVID-19 experienced elsewhere in the world, which will have helped its economy despite months of political unrest in the city,” said Kilfedder.

Brazilian cities fall in the rankings as volatility continues

All Brazilian cities have fallen out of the top 200 most expensive in the world as the real has plummeted in value in recent years. Volatility is not new to the country, while three years ago Sao Paulo was 85th in the world the year before that it was 199th in the world. With the country already facing weak growth before the pandemic hit the country and oil prices collapsed it is likely that there is further volatility ahead.

South East Asian countries continue to rise in the ranking

Thailand, Indonesia, Cambodia and Vietnam have all risen in the latest ranking. This continues to be a long-term trend as their economies have steadily strengthened in recent years. While locations in these countries jumped up five places on average in the past year, they have risen by an average of 35 places in the last five years, including a 64 place rise for Bangkok to become 60th most expensive location in the world.

“Emerging markets in South East Asia are becoming more expensive for many visitors and expats due to their appreciating currencies. Thailand in particular has become significantly more expensive for international business and tourism. As a result, Thailand’s central bank is actually attempting to weaken its currency, the baht, to keep the country as an attractive place for investors and visitors, with the currency having reached a six-year high at the end of last year,” said Kilfedder.

This time two years ago only 10 North American locations featured in the top 100. As the US and Canadian economies strengthened in the past year, the value of their respective currencies has been pushed up, and so too has the cost of goods and services for visitors and expats. ECA’s report shows locations in USA and Canada now make up 29 of the top 100 most expensive in the world.

Cairo moved to 193rd in the global cost of living ranking this year, up 42 places on last year — one of the most dramatic increases in ECA’s report. This was thanks to the recovery in the Egyptian pound after a period of steep losses since the currency was allowed to float in 2016 as part of an IMF bailout.

Iran cheapest in the world, while Israel is among most expensive

Tehran, the capital of Iran, is ranked as the cheapest location in ECA’s global Cost of Living report for the second year running despite high levels of inflation.

Kilfedder continued: “Already suffering from the sanctions imposed by the US in 2018 Iran was poorly placed to deal with one of the first major outbreaks of the COVID-19 pandemic. While the rial has weakened significantly, price rises of almost 40% in the year meant that despite remaining the cheapest country in the world, Iran has actually got more expensive for visitors and expatriates.”

In contrast in Israel, Tel Aviv and Jerusalem are both in the top 10 most expensive global locations (8th and 9th respectively), after consistently increasing in cost in the last five years thanks to the long-term strength of the shekel. — SG

These were the details of the news Central London re-enters top 20 most expensive cities in Europe for this day. We hope that we have succeeded by giving you the full details and information. To follow all our news, you can subscribe to the alerts system or to one of our different systems to provide you with all that is new.