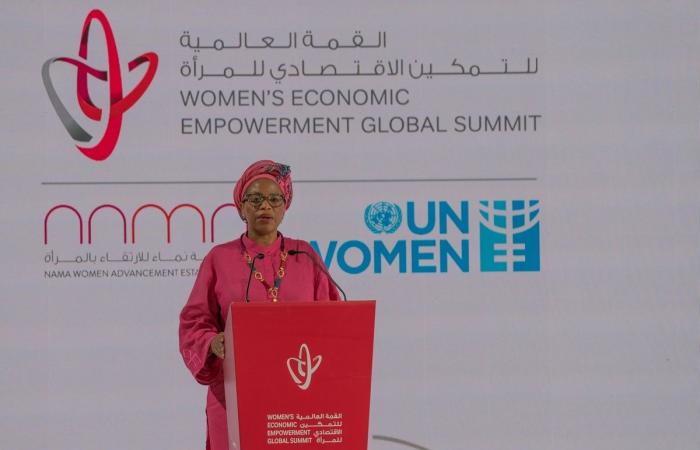 Aden - Yasmine El Tohamy - Sustainable economic growth will only be possible when organisations accept that they need to start investing heavily in women and their careers for the long-term, experts said at the Women's Economic Empowerment Global Summit (WEEGS 2019) in Sharjah.

The two-day summit is organised by the Nama Women Advancement Establishment and the United Nations Entity for Gender Equality and the Empowerment of Women (UN Women), under the theme 'Drivers of Change', and is being held under the patronage of Sheikha Jawaher bint Mohammed Al Qasimi, chairperson of Nama.

She also noted that the UAE is a leader in the GCC region when it comes to establishing gender equality as a norm. "The UAE boasts 70 per cent of its graduates as women. This is unheard of, and the starting point of any progress, we know, is education. Women make up 50 per cent of employees in the space sector and 25 per cent of the cabinet ministers in the UAE. In addition, women-owned businesses contribute over 10 percent to the national economy."

Dlamini concluded by quoting former managing director of the International Monetary Fund, Christine Legarde, who said: "The UAE's track record of empowering women by bringing them to the main stream is a story to be told globally and an example to be followed around the world."

A report by the World Bank found that around 2.7 billion women around the world are still legally barred from having the same choice of jobs as men. In addition, data released by the International Labour Organisation in 2019, showed that women represent 38.96 per cent of the global workforce. Promoting equal economic opportunities for men and women would contribute to increasing the global annual GDP by between $12 trillion and $28 trillion by 2025.

PwC's 'Women in Work Index - Insights from the Middle East and North Africa' survey asked 3,000 women and men across the UAE, KSA, and Egypt about the regional workforce and where they can improve gender diversity. It was found that $575 billion are lost yearly in the region due to legal and social barriers that exist for women's access to jobs. The results showed that 56 per cent of women felt they were treated equally to men when it came to promotions, while 66 per cent believed that governments should intervene in the private-sector and set targets for gender diversity.

"We strive to change the culture that allows a glaring 23 per cent gender pay gap to exist. We would like to change the culture that allows only 28 per cent of working women around the world to have a paid maternity benefits. We seek to change the culture that forcibly orientates girls towards professions and specialisations that do not realise their ambitions or their potential. We need to make every effort to break the stifling stereotypes that severely limit the achievements of working women, and offer them the resources they need to establish the right balance between their professions and families. To attain these goals, we must assume our roles as active drivers of change," said Reem BinKaram, director of Nama.

These were the details of the news Women at the heart of sustainable progress for this day. We hope that we have succeeded by giving you the full details and information. To follow all our news, you can subscribe to the alerts system or to one of our different systems to provide you with all that is new.