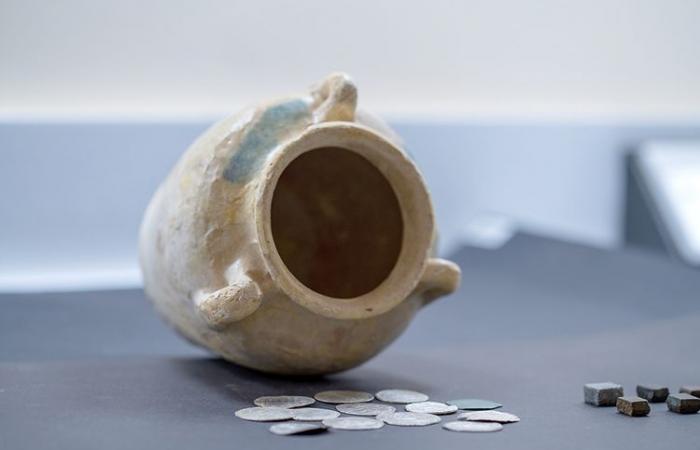 The local mission of Sharjah Archaeology Authority (SAA) announced on Tuesday that it had found a number of ancient Islamic coins in the Central Region, Sharjah. The coins are of rare silver dirhams dating back to the Abbasid Caliphate era, in addition to one copper penny.

Commenting on the discovery, Dr Sabah Aboud Jassim, Director General of the Sharjah Archaeology Authority said that these rare coins had been discovered during the excavation operations being conducted in the Central Region of the Emirate of Sharjah in September 2021.

“This new discovery confirms a large geographical range, which extends from Africa in the west, to the Transoxiana region in the east, and according to the administrative division of the Islamic world during the rule of the Abbasid Caliphate, and in particular the first Abbasid era,” he added.

The researchers confirmed that this new archaeological discovery dates back to an important era in the history of the Emirate of Sharjah in particular, and the emirates in general, in the second half of the second Hijri century, or since the first Abbasid era.

They refer to the commercial activity played by the coasts of the emirates and the Central Region of the Emirate of Sharjah in the international trade.

Minting of the discovered coins are believed that they had come from many of the main trade routes to the Arabian Gulf and the coast of the emirates in particular, which proves that the region was a major commercial hub at that time, and a route for the passage of convoys throughout the Abbasid state.

MBZIRC Maritime Grand Challenge:  The Mohamed Bin Zayed International Robotics Challenge (MBZIRC) will be held in the UAE capital, Abu Dhabi, in June 2023, where tech innovators will participate to seek marine safety and security solutions to take home more than US$3 million in prize money.

Organised by ASPIRE, the dedicated technology programme management pillar of the Advanced Technology Research Council (ATRC), the overarching advanced technology research body in Abu Dhabi, UAE, the MBZIRC is held every two years. The upcoming edition, called MBZIRC Maritime Grand Challenge, focuses on real-time solutions to maritime safety and security challenges and seeks to claim its place among the largest and most prestigious AI and robotics competitions in the world.

The Challenge is open to international universities, research institutions, companies and individual innovators from all over the world. It will involve a heterogeneous collaboration among unmanned aerial vehicles and unmanned surface vehicles, to perform complex navigation and manipulation tasks in a GNSS-denied environment.

Commenting on the announcement, Faisal Al Bannai, Secretary-General of ATRC, said, “We are proud that MBZIRC is going global by inviting the best talent from all over the world to participate. We have set a tough real-world challenge that will push the participants to the limits of their capabilities. The event is a great opportunity to demonstrate the pioneering scientific research work that is taking place in Abu Dhabi and the UAE.”

The challenge will show how both entities focus on niche areas of technology, while attracting global innovators to stimulate ideas, encourage collaboration, and push boundaries in advanced technologies to find systems solutions to global challenges.

From his side, Dr Arthur Morrish, Chief Executive of ASPIRE said, “For countries with long coastlines, ensuring maritime safety requires significant investment in sophisticated equipment and highly trained personnel. Using advanced robotic systems can not only help reduce costs, but also handle some of the often- dangerous tasks performed by humans. The motivation for holding the MBZIRC Maritime Grand Challenge is to take the technology out of the laboratory and test it in a real-world environment to see what is possible.”

These were the details of the news Treasure of rare coins belonging to Abbasid era found in Sharjah for this day. We hope that we have succeeded by giving you the full details and information. To follow all our news, you can subscribe to the alerts system or to one of our different systems to provide you with all that is new.