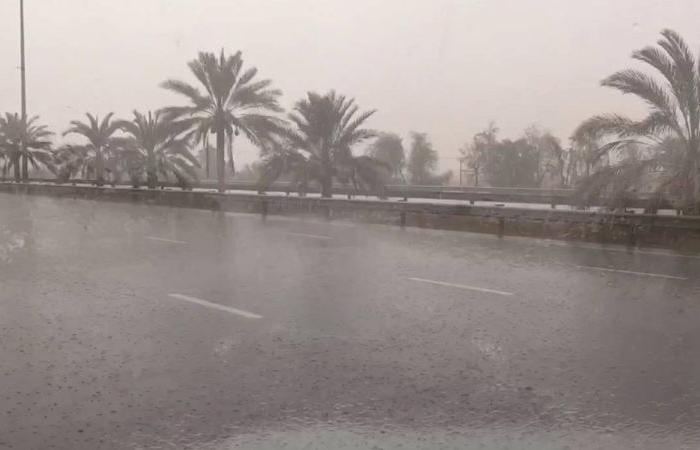 The National Center of Meteorology (NCM) has reported that the Arabian Sea will see a tropical condition on Thursday, and that it could move west.

The NCM explained that that there are several possible paths, confirming that it is following-up the situation around the clock.

Light rain began to fall at 2:30 pm on Marbad, Fujairah, and along areas in Ras Al Khaimah, and Saa’ area in the city of Al Ain, while it was light to medium and heavy on Kalba-Sharjah road, according to the NCM.

Al Jazeera area in Al Dhafra Region recorded the country’s lowest temperature on Tuesday morning that was 23.3ºC at 6:30 am, while the highest was 42.1ºC in Suwaihan area, Al Ain, the NCM said.

The National Center of Meteorology called for caution while driving during rain and the lack of horizontal visibility, caused by winds that raise dust, advising public to stay away from places of water gathering and the surface run-offs.

The NCM also indicated that the weather on Wednesday would be fair to partly cloudy and hazy at times, with a chance of some rainy convective clouds formation eastward and southward by afternoon.

“Humid by night and Thursday morning over some coastal and internal areas. Light to moderate southeasterly and northeasterly becoming northwesterly winds, freshening at times with the clouds causing blowing dust and sand, with a speed of 15 – 25, reaching 40 kilometres/ hour. The sea will be slight in the Arabian Gulf and in the Oman Sea,” the NCM said.

It further noted that the weather on Thursday would be fair to partly cloudy and hazy at times, with a probability of some convective clouds formation eastward by afternoon.

It continued, “Humid by night and Friday morning over some coastal and internal areas.

These were the details of the news Rainfall hits several areas of country for this day. We hope that we have succeeded by giving you the full details and information. To follow all our news, you can subscribe to the alerts system or to one of our different systems to provide you with all that is new.