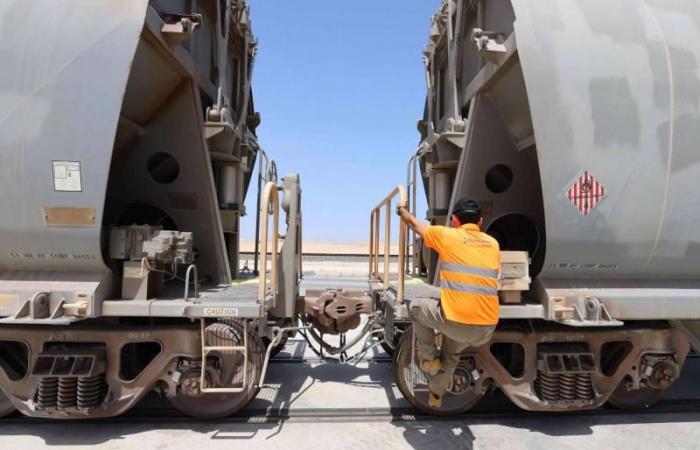 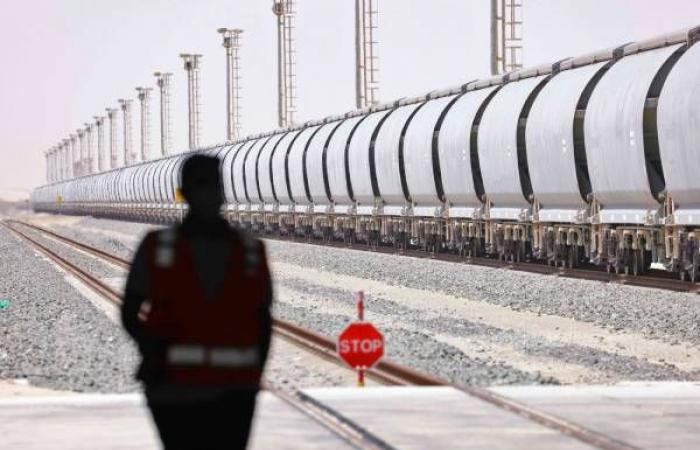 Hind Al Soulia - Riyadh - A technician working at wagons of the Etihad Rail network, in al-Mirfa, in the United Arab Emirates. (AFP)

ABU DHABI – In the desert emirate of Abu Dhabi, Ibrahim al-Hammadi inspects a freight train on the UAE’s first railway line. He climbs aboard the locomotive, does a final systems check and then it’s full steam ahead.

Hammadi is the first Emirati to become a train driver, in a country which already has a space programme and two of the world’s biggest airlines, but is only now developing a rail network to connect all seven of its emirates.

“I was intrigued when I saw the train operating,” the 23-year-old said. “It was something new and it pushed me to ask around about learning how to drive it.”

The United Arab Emirates is well known for its audacious infrastructure and technology projects. It successfully sent a probe to Mars earlier this year and the world’s first superfast hyperloop system is planned to link its two main cities, Dubai and Abu Dhabi.

When completed, Etihad Rail will operate 1,200 kilometres (750 miles) of track connecting all of the emirates from Ghweifat in the western region of Abu Dhabi to the emirate of Fujairah on the eastern coast and link with neighbouring Saudi Arabia.

The long-term plan is to be part of a wider railway network that would connect all six Gulf Cooperation Council countries, including Bahrain, Kuwait, Oman and Qatar as well as the UAE and Saudi Arabia.

However, a spirit of competition between the emirates, which each have their own specialities and areas of interest, is credited with holding back the national rail project.

“There has been some hesitance from the federal government to spend on national economic integration projects … along with traditional issues on emirate-level sovereignty,” Karen Young, senior fellow at the Middle East Institute, said.

“The UAE is a federal system and its centralisation of authority and economic and development policy within (the federal capital) Abu Dhabi are still relatively new.”

And so far there has been little progress on the multi-billion-dollar GCC railway, which has languished after a feasibility study was approved by the six countries back in 2004.

“The rail projects within the GCC have been in a planning process for years, part of bigger goals of trade and economic integration within the regional organisation of the Arabian peninsula,” Young said.

“That integration has faced a number of obstacles, from a shared currency policy that is now moot, to the dispute with Qatar which severed basic investor rights, citizen travel and trade.”

That dispute, which lasted for more than three years before being resolved in January, saw Saudi Arabia and its allies, including the UAE, sever ties with Qatar in June 2017 partly over allegations that Qatar was too close to Iran. Doha denied the accusations.

Hammadi works on Etihad Rail’s first section of line, which covers 264 kilometres and has been operational since 2016.

He drives trains transporting granulated sulphur from Abu Dhabi’s inland fields in Shah and Habshan to the port of Ruwais.

Freight is currently the line’s main focus but as it is extended through the mountains between the emirates of Dubai and Fujairah, the line is also set to offer passenger services that will run at speeds of up to 200 kph (125 mph).

That will provide an alternative to the UAE’s network of mega-highways, some more than a dozen lanes wide, which carry endless streams of motorists in a car-dependent nation, as they zip through canyons of skyscrapers or rocky mountains and towering dunes.

“Railways have always been a vital component in the economic, social and strategic growth of countries around the world,” Hammadi said.

“It developed the infrastructure in the western region (of the UAE), increased security and safety on the roads and lessened congestion.

“The Etihad Rail project will connect the country’s key centres of trade, industry and population.”

On the project’s first stage, Etihad Rail operates seven locomotives and 240 freight wagons, with each locomotive hauling up to 110 wagons as it crosses the country’s vast desert.

In the Abu Dhabi control room, Maitha al-Remeithi, the first female Emirati train controller, walks from one section to another monitoring the dozens of screens in the room.

For Remeithi,who started working with Etihad Rail in 2017, it was her passion for something “unique, exciting and new” that drove her towards the rail industry.

“The railway is growing every day and as I am involved in the daily running of the operation, I can see its positive impact within the transport sector from safety, environmental and logistics perspectives,” the 30-year-old said.

“Using rail as a mode of transport means fewer trucks on the roads; the need for road maintenance is less and CO2 emissions are less,” Remeithi said.

These were the details of the news UAE’s fledgling rail network to connect all six Gulf countries for this day. We hope that we have succeeded by giving you the full details and information. To follow all our news, you can subscribe to the alerts system or to one of our different systems to provide you with all that is new.