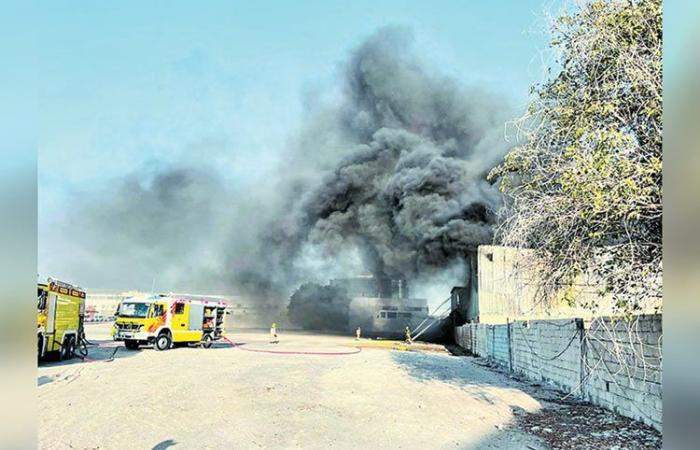 Nevin Al Sukari - Abu Dhabi - The Civil Defence teams in Dubai brought under control a fire that broke out in a ceramics warehouse in Umm Al Ramool.

The Civil Defence teams in Dubai brought under control a fire that broke out in a ceramics warehouse in Umm Al Ramool. No injured people were reported.

A Dubai Civil Defence source stated that that the operations room received a report at 16:48 on Thursday that a fire erupted in Umm Al Ramool area.

Fire-fighting teams from Al Rashidiya Fire-Fighting and Rescue Station as a competent authority and first responder rushed to the scene and arrived there in 3 minutes to find that the fire had erupted in a ceramics warehouse.

The source added that the Civil Defence teams and units started putting out the fire, while teams from Al Karama and Port Saeed stations rushed to the scene for additional support based on the request of the officer in charge.

The source confirmed that the Directorate of Civil Defence received a report at 17:39 that the fire was completely brought under control.

TWO ASIANS BOOKED IN THEFT CASE: The Dubai Criminal Court sentenced two Asians to 3 months in jail, to be followed by deportation after serving the sentences, on charges of attempting to steal electrical cables valued at Dhs50,000, using the driving licence of another person and showing it to the police.

Details of the case date back to April 2021, when a policeman, on duty in the Jebel Ali area, saw the suspects loading electrical cables from a company on top of a vehicle.

The policeman told the prosecution he waited until the suspects finished loading the cables and after they moved, he stopped them and asked for their identity and vehicle licence.

When he checked the documents, he found the driver’s licence belonged to another person.

On being interrogated, the first suspect confessed he connived with the second and a fugitive to steal the cables after cutting them with iron scissors which were found inside the vehicle.

These were the details of the news Ceramics warehouse catches fire in Dubai for this day. We hope that we have succeeded by giving you the full details and information. To follow all our news, you can subscribe to the alerts system or to one of our different systems to provide you with all that is new.