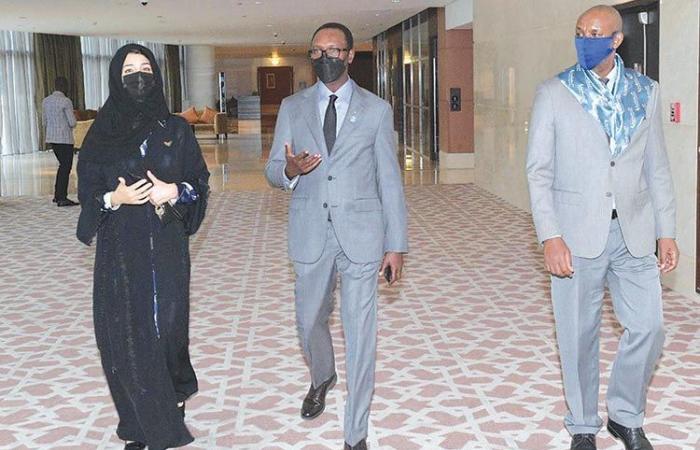 Hello and welcome to the details of Rwanda genocide should never happen again: Reem Al Hashimy and now with the details

Nevin Al Sukari - Abu Dhabi - Reem Ebrahim Al Hashimy and Rwandan Ambassador to the UAE and Saudi Arabia Emmanuel Hategeka at the Friday “27th Commemoration of the Tutsi Genocide of 1994” in Dubai.

The 700-strong Rwandan communities in the UAE, Saudi Arabia and Bahrain observed the 27th year of the horrific Tutsi Genocide of 1994 on Friday in Dubai and in solidarity, UAE Minister of State for International Cooperation Reem Ebrahim Al Hashimy said such a cataclysm must never happen again.

In her address before guests at the Address Hotel (Dubai Marina), Al Hashimy said: “I am deeply honoured and deeply humbled to represent my country at this 27th Commemoration of the Genocide against the Tutsi in Rwanda. This is a very important moment and a very important milestone for us to remember and honour the victims and also for us to pay respect to the survivors and ensure that what happened never happens again.”

“There is a lot of respect, compassion and solidarity from the people of the United Arab Emirates and from the leadership of the United Arab Emirates towards our fellow brethren in Rwanda and also the leadership of Rwanda led by His Excellency President Paul Kagame who we hold a lot of respect for and we continue to enjoy strong relations with Rwanda.

“We stand hand-in-hand with you and we pray that this not only happens again but we work actively together to ensure all forms of hatred, all forms of extremism are fought and tackled.”

Early on and in his welcome address, Rwandan Ambassador to the UAE and Saudi Arabia Emmanuel Hategeka praised the courage and humility of the  survivors to forgive the perpetrators.

The perpetrators of the Tutsi Genocide of 1994 have been historically recorded as the Hutu-led government and its armed militia who went on a massacre rampage against the Tutsi minority group from April 7 to July 15, 1994 due to years of national political struggle. The trigger to the 100 days of killings was the assassination of Rwandan President Juvenal Habyarimana on April 6, 1994. Habyarimana was a Hutu. In 1990, a Tutsi-led rebel group of refugees called the Rwandan Political Front, from Uganda, sparked the civil war.

On Friday, Hategeka, also the ambassador-designate to Bahrain, asked the international community “to recommit ‘Never Again’ by bringing to justice (the) genocide suspects still at large. There are now 1,100 genocide fugitives roaming in different countries and they have not been apprehended.”

Hategeka noted that in 1994, the international community “totally failed” to condemn the Tutsi Genocide.

He cited the recent election of Dr. Ngozi Okonjo-Iweala, a Nigerian-American economist and international development expert, as the Director-General of the World Trade Organisation, and Rwandan Economist Dr. Monique Nsanzabaganwa as the vice-chairperson of the African Union Commission, as examples.

“One can draw parallels with the equally laudable successful Hope Probe Mission to Mars and the magnificent groundbreaking Expo 2020 officially starting in October of 2021 in Dubai – both historic with women leaders at the helm,” Okonjo-Iweala said.

With high levels of women’s participation in the UAE Cabinet and women making up 66 per cent of the public sector workforce in the Emirates, according to the UAE Gender Balance Council data, the country is arguably leading the region in gender parity, the envoy pointed out.

He explained that after the devastating effects of the 1994 genocide, which destroyed the socioeconomic fabric of Rwanda, the government placed gender equality and women’s empowerment at the forefront as full recovery could only be possible with women and men equally contributing to the country’s vision for development.

These were the details of the news Rwanda genocide should never happen again: Reem Al Hashimy for this day. We hope that we have succeeded by giving you the full details and information. To follow all our news, you can subscribe to the alerts system or to one of our different systems to provide you with all that is new.

PREV Flights from India, Pakistan, Bangladesh and Sri Lanka to UAE suspended till Aug.7
NEXT These 31 countries are exempted from quarantine in Abu Dhabi