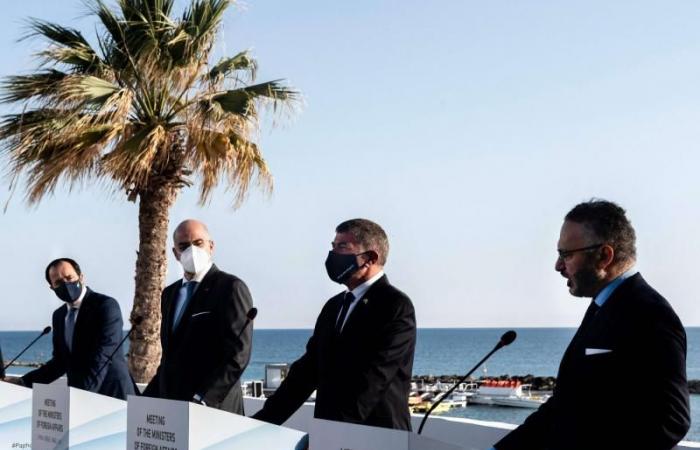 We show you our most important and recent visitors news details Cyprus meeting of UAE, Israel, Greece showcases ‘new narrative’ in the following article

Ministers of Foreign Affairs of Cyprus, Greece and Israel, and Adviser to the President of the United Arab Emirates Anwar Gargash hold a press conference in Cyprus, April 16, 2021. (AFP)

PAPHOS, CYPRUS--Cyprus hosted a meeting Friday of top diplomats from Israel and the UAE, as well as Greece, for talks they said reflected the “changing face” of the Middle East.

“This new strategic membership stretches from the shores of the Arabian Gulf” to the Mediterranean and Europe, Israeli Foreign Minister Gabi Ashkenazi told a news conference in the coastal resort city of Paphos.

Standing alongside Anwar Gargash, adviser to Emirati President Sheikh Khalifa bin Zayed, he said their encounter was a sign of “the changing face of the Middle East”.

He called for a “strategic partnership in energy between the Eastern Med and the Gulf”, following last year’s historic normalisation of ties between Israel and the United Arab Emirates.

The Cypriot and Greek foreign ministers both stressed the new regional grouping was open to all parties.

“The evolving web of regional cooperation is creating a new narrative, one that is cracking the glass ceiling of the prevailing (one) of our neighbourhood as a region of turmoil, conflict and crisis,” said Cypriot Foreign Minister and host Nikos Christodoulides.

“The path is open for all countries of the region to join us,” he added, without a direct mention of Turkey, whose troops occupy the northern third of Cyprus and which is in dispute with Nicosia and Athens over gas deposits in the eastern Mediterranean.

“On energy, we agreed that unlocking the full energy potential of the region by enhancing the sustainable, efficient, and environmentally conscious developments of natural gas must be a priority,” he pointed out.

Greek Foreign Minister Nikos Dendias, who has visited both Turkey and Libya over the past week, stressed calls for “the withdrawal of all foreign forces” from the North African country, where Turkish troops are posted.

On Iran and its controversial nuclear programme, Ashkenazi reiterated that Israel would “do whatever it takes to prevent this radical and anti-Semitic regime from acquiring nuclear weapons”.

These were the details of the news Cyprus meeting of UAE, Israel, Greece showcases ‘new narrative’ for this day. We hope that we have succeeded by giving you the full details and information. To follow all our news, you can subscribe to the alerts system or to one of our different systems to provide you with all that is new.