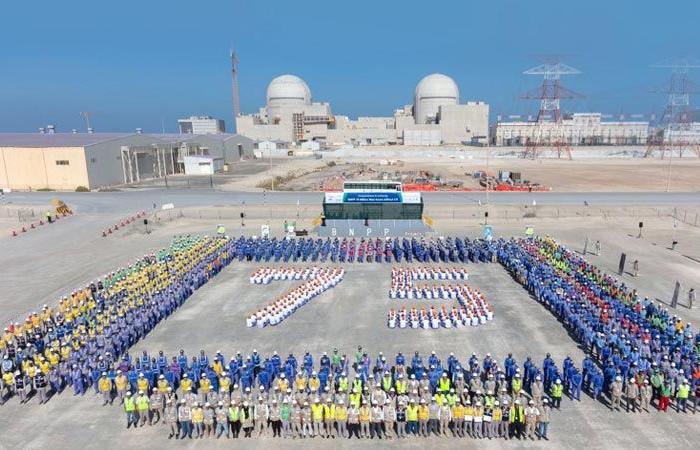 The start of commercial operations follows a period of extensive testing, overseen by the independent national regulator - the Federal Authority for Nuclear Regulation (FANR).

FANR conducted 312 independent inspections since the start of Barakah’s development. These reviews have been conducted alongside more than 42 assessments and peer reviews by the International Atomic Energy Agency (IAEA) and World Association of Nuclear Operators (WANO).

Vice President, Prime Minister of the UAE and Ruler of Dubai, His Highness Sheikh Mohammed Bin Rashid Al Maktoum, took to his social media account to congratulate the nation on the achievement of Barakah Nuclear plant

“Today, the UAE entered a landmark phase. The effort of 10 years, 2,000 engineers, Emirati youth and 80 int'l partners. The first megawatt from the first Arab nuclear plant has entered the national power grid. Congratulations to the UAE,” tweeted Sheikh Mohammed.

Sheikh Mohamed Bin Zayed applauded this achievement, describing it as a significant milestone in the UAE’s long-term roadmap for sustainable, knowledge-based economic prosperity, benefiting many generations to come.

Sheikh Mohamed said that the UAE Peaceful Nuclear Programme, which is run by the UAE talented and fully qualified Emirati expertise, along with global expertise, will be a game changer of the energy sector in the country.

Sheikh Mohamed Bin Zayed added that the UAE Programme has become a global and pioneering role model in close international co-operation in such strategic projects.

Barakah One Company, ENEC’s subsidiary in charge of the financial and commercial activities of the Barakah project, signed a Power Purchase Agreement (PPA) with the Emirates Water and Electricity Company (EWEC) in 2016 to purchase all electricity generated at the plant for the next 60 years.

Electricity produced at Barakah Plant feeds into the national grid in the same manner as other energy plants, providing clean electricity to homes and businesses across the country.

The Barakah Nuclear Energy Plant, located in the Al Dhafra region of the Emirate of Abu Dhabi, is one of the largest nuclear energy plants in the world, with four APR-1400 Units.

Construction of the Plant began in 2012 and has progressed steadily ever since. Unit 2 has now completed the fuel load process and is working through all of the required processes prior to start-up, scheduled for later in 2021.

The construction of the Barakah Plant as a whole is now more than 95 per cent complete.
.

These were the details of the news Leaders greet nation as Unit 1 of Barakah Plant starts commercial operations for this day. We hope that we have succeeded by giving you the full details and information. To follow all our news, you can subscribe to the alerts system or to one of our different systems to provide you with all that is new.