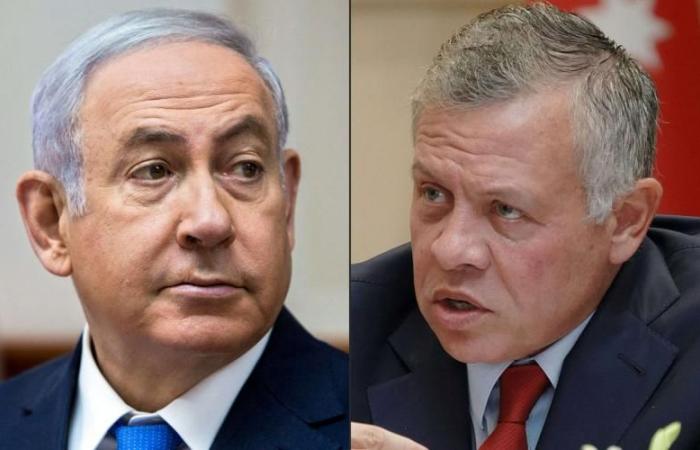 Hind Al Soulia - Riyadh - A Jordanian official, who asked to remain anonymous, said that “relations with Netanyahu have been strained for many years”.

The Hashemite kingdom — which kept a low profile during the term of former US president Donald Trump, a close Netanyahu ally — now believes the winds have shifted and Joe Biden will show a more balanced approach.

Last Thursday, Jordan delayed granting Netanyahu permission to cross its airspace to the UAE after a disagreement over Jordanian crown prince’s projected visit to Jerusalem. The delay forced the Israeli leader to shelve his trip to the rich Gulf state with which Israel normalised relations in a landmark agreement last year.

The move is perceived as a blow to Netanyahu, who is campaigning for re-election on March 23.

Jordan’s flight ban “sent an abrupt and firm message to make him understand that it will no longer tolerate his way of behaving towards it,” said Ahmad Awad of the Phenix Center for Economics & Informatics Studies in Amman.

Netanyahu had been due to meet the Crown Prince of Abu Dhabi, Sheikh Mohamed bin Zayed Al-Nahyan, to mark the historic agreement between Israel and the UAE on what would have been his first official visit to the Gulf state.

“Jordan chose the right moment to scupper what was supposed to be a show of victory and a campaign event for Netanyahu,” said Oraib al-Rantawi, director of the Jordan-based Al Quds Center For Political Studies.

“This move has turned into a crisis between the two countries.”

With an ongoing graft trial still hanging over his head, he is campaigning both on a world-leading coronavirus vaccination drive and as a statesman who has delivered diplomatic breakthroughs.

In the so-called Abraham Accords brokered by the US under Trump, Israel also established relations with Bahrain and Sudan and resumed ties with Morocco — its first such agreements in the Arab world since its peace treaties with Egypt in 1979 and Jordan in 1994.

Palestinians regarded these deals as a betrayal, maintaining that Arab states should isolate Israel until the people living in the occupied West Bank and the Gaza Strip have their own independent state.

Diplomatic contact ceased between the Palestinians and Washington after Trump had given his approval for Israel to annex the West Bank. Jordan, home to many Palestinian refugees, had strongly opposed that suspension of links.

Awad said that, “after years of deliberate marginalisation of its role under an American administration further to the right than the Israeli right, Jordan is in the process of restoring the situation with the arrival of Biden”.

Rantawi also said that, with Trump out of the picture, “Jordan today feels more comfortable”.

“The Trump administration was threatening Jordan’s vital interests regarding the final solution to the Israeli-Palestinian conflict,” he said.

Rantawi said while the Trump administration strongly supported Israel’s position in the long-running dispute, the Biden administration “supports the two-state solution and considers Jordan a partner”.

“It has returned to traditional American positions in the Israeli-Palestinian conflict.”

Tensions rose last week after Israel’s cancellation of a planned visit by the Jordanian crown prince to the Al-Aqsa mosque in east Jerusalem, the Palestinian sector of the Holy City annexed by the Jewish state.

According to the head of Jordanian diplomacy, Ayman Safadi, Prince Hussein decided to cancel his visit after Israel had announced at the last moment that it would change the crown prince’s programme .

Underlying this is the struggle between the two countries for control of the esplanade that is home to the Al-Aqsa mosque, Islam’s third holiest site.

While Israel occupies the eastern part of Jerusalem, the mosque is administered by the Waqf, an organisation that manages Muslim property and which, for historical reasons, depends on Jordan.

Safadi explained Jordan’s position in the spat with Israel on CNN on Friday.

“You renege on an agreement with Jordan, you disrupt a religious visit, you create conditions that made this religious visit on a holy occasion impossible and then you expect to come to Jordan and fly out of Jordan?” he said.

A Jordanian official, who asked to remain anonymous, told AFP that “relations with Netanyahu have been strained for many years”.

He said that King Abdullah II “refuses to receive him or answer his phone calls”. Their last officially announced meeting was in June 2018, and the one before that in 2014.

King Abdullah of Jordan has repeatedly described the peace with Israel as a “cold peace” and in late 2019 said that Israeli-Jordanian relations are at “an all-time low”.

These were the details of the news ‘Cold peace’ with Jordan frustrates Netanyahu’s plans for this day. We hope that we have succeeded by giving you the full details and information. To follow all our news, you can subscribe to the alerts system or to one of our different systems to provide you with all that is new.