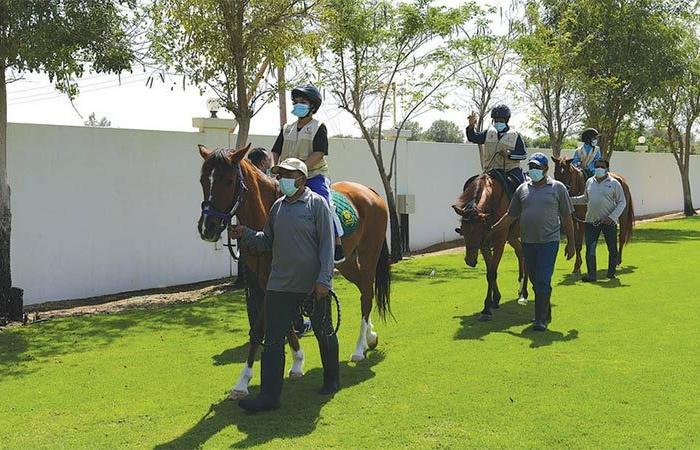 As part of the Dubai Police’s community-based initiative ‘Positive Spirit’, the Dubai Mounted Police, in coordination with the General Department of Community Happiness, have recently organised a training workshop on horseback riding basics for 15 orphans from Hemaya Schools for Boys.

The workshop, which took place at the Mounted Police Department in Al Aweer area, was delivered to the enthusiastic participants by Dubai Police’s professional trainers.

The orphans were introduced to the basics of horsemanship, and were provided a hands-on experience to work in different areas, from riding and grooming to horsey arts and playing with horses. They were also trained on saddling, bridling, riding attire, mounting, holding the reins, correct riding position, going forward and stopping, and steering.

They were also entertained with Dubai Police mascot Amna, who raised their awareness of the precautionary measures against the new coronavirus (COVID-19).

The orphans extended their appreciation to Dubai Police for the opportunity that gave them joy and pleasure and added a valuable skill to their knowledge.

According to Captain Khalifa Al Roum, Director of Dubai Police Volunteer Platform, the platform recoded 89,758 hours of volunteer work carried out by Dubai Police’s employees and members of the public who joined the force in its volunteering and humanitarian work.

“Dubai Police achieved first place for the best governmental institution supporting volunteer work during the 17th edition of Sharjah Award for Voluntary Work for the “Volunteer Platform” project, “This is an important achievement for the Dubai Police General Command and for all employees and volunteers,” he said.

The Dubai Police have recently bagged six awards at the 9th UAE Ideas Awards 2020 and the 5th Ideas Arabia International Award for five innovative projects and initiatives during 2020.

The Commander-in-Chief also praised the tremendous efforts made by the force’s employees, and encouraged them to achieve further progress in policing work.

The Dubai Police deserved these awards in recognition of its noticeable efforts across all fields in different categories, including “Executive Leadership”, “Customer Happiness”, “Innovation”, “ Empowering National Human Resources”, and “ Promoting National Identity”.

Towards the end of last year, the Dubai Police General Command, represented by the General Department of Punitive and Correctional Institutions (PCI), launched a voluntary programme through which inmates get the opportunity to engage in different kinds of voluntary works within the Department.

The programme, launched under the slogan “Fina Khaer” (The Goodness Within), is approved by the Dubai Volunteering Centre of the Community Development Authority (CDA).

It also serves as an educational programme to enrich the inmates’ knowledge on this type of noble work and its significance to the community by enrolling them in various activities and programmes.

These were the details of the news Dubai Police horses share a special bond with orphans for this day. We hope that we have succeeded by giving you the full details and information. To follow all our news, you can subscribe to the alerts system or to one of our different systems to provide you with all that is new.