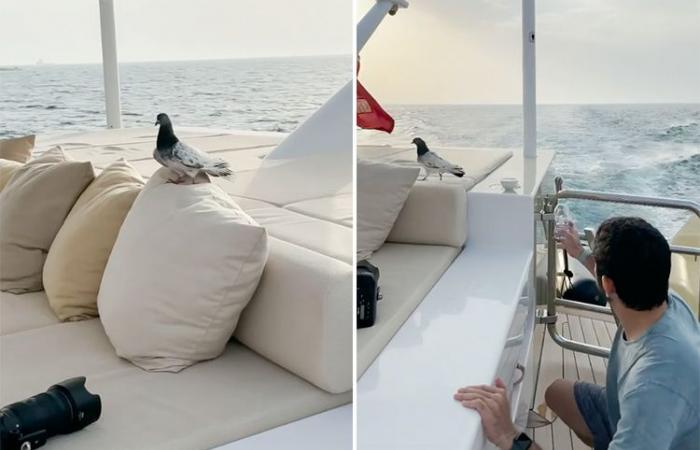 The Crown Prince of Dubai took to his Instagram and shared a video of the incident.

The video shows the bird fiercely flying to catch up with the Crown Prince’s yacht.

It is noteworthy that Hamdan has slowed down the yacht a little.

The bird lands on the deck and is vigorously figuring out the surroundings.

The thirsty pigeon then is seen drinking water on the deck.

The Crown Prince leaps forward with a bottle of water and pours it into a small bowl for the pigeon.

The bird drinks the water and then Hamdan gives it some food.

Sheikh Hamdan captioned the video, “Glory be to the one who feeds birds in the sea.”

In 2 minutes, the bird is seen hovering on the yacht and is with the Crown Prince till they reached the shore in Dubai.

The video garnered over 113,215 views in less than an hour on Instagram.

In August 2020, Hamdan shared videos and photos of a bird building a nest on his SUV. Ever since, the Royal has not been near his car and therefore told everyone to stay off the area.

Hamdan shot the video from a distance so as not to scare the bird away.

The move by Sheikh Hamdan to cordon off his Mercedes-AMG G63 SUV at the parking lot of his residence in Dubai paid off as two birds have hatched on the bonnet.

The Crown Prince wrote, “Sometimes the little things in life are more than enough.”

The heartwarming video went viral as soon as the Crown Prince shared it on Instagram.

The sport-enthusiast Crown Prince of Dubai is an avid lover of nature and animals. He shares breathtaking photographs and videos of his whereabouts on Instagram.

Hamdan’s Instagram bio reads, “Every picture has a story and every story has a moment that I'd love to share with you. Thanks and enjoy.”

These were the details of the news Sheikh Hamdan quenches pigeon’s thirst in the middle of the sea for this day. We hope that we have succeeded by giving you the full details and information. To follow all our news, you can subscribe to the alerts system or to one of our different systems to provide you with all that is new.